Does the little lady on the left look like she's with children? I don't have males, but from what I have read guppy females can have babies even after not being with a male for quite some time. I know asking and showing an unclear picture will not get me a precise answer but just curious what others think. Thanks in advance!

The one on the left does look pregnant.

Here is my other questionable momma.... 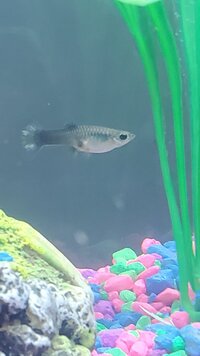 Also likely pregnant. Here's a rule (that sort of works):
If it's a female livebearer, it's pregnant.
Of course, if it's old enough and has been with a male at some point.

Is there info somewhere on how many times they can give birth after mating and without having a male in the current tank?

There's no specific number of pregnancies from one mating. But female guppies can store sperm packets just over a year. It depends on the individual female how often she'll releases 1 or more sperm packets from the folds of her fallopian tube to fertilize her eggs. This means also that when she hasn't released 1 or more sperm packets, that such a female isn't pregnant at that stage.
You also need to know that noticing a gravid spot itself, does not indicate that a female is pregnant. Only if the gravid spot seem to become bigger (the skin on that spot stretches and becomes thinner which makes it more visible what happens inside), then she might be pregnant. For also a non-pregnant guppy female will show a gravid spot.
If both guppies shown are pregnant, they still have a long time to go.

Thank you! It's been interesting to watch them. I noticed yesterday that they almost seemed to be picking on each other. The darker one usually stays in the shadows but she's been making her presence known!
You must log in or register to reply here.

Crab intruders? In my house?