Upside down and very busy!


It’s about 3 inches long and has been living with my Africans for about a month. So far so good. The cichlids pretty much ignore him.

Member
Here is the big and little pleco

Veggie day today..... no worms. no dry food. just veg - so one of my friends hogs the zucchinI ....nibbling a bell-shaped opening into the middle

Member
Mr.Poopsalot, in all his nine inch glory!

Member
My sailfin pleco!! My favorite fish that I own. Although she does s.hit a lot haha! This picture was taken a little while ago. She is about 5 And half inches now! Lovveees food!! Her favourites are algae wafers, worms, cichlid pellets (I seen her come up to the surface and grab a floating pellet once lol.) Her name is Saily (My son named her and he insists that she is a girl but I have no idea lol). We definitely love her.

Member
That was a while ago. They're both doing well. I decided I wanted to try to breed the L128 so I got 4 more.

In QT with some SterbaI cories

Member
My tiny little Clown Pleco. It's so shy and only comes out at night. This was the one and only time it came out during the day so I had to get a picture lol. It loves driftwood and algae wafers. It is seriously so cute!!

2 of my babies. Love these little guys but don’t love the amount they poo lol


Aqua Fan said:
My misses is called Sarah and I’m not sure who is more attractive (joking). Beautiful Pleco. What type is it?
Click to expand...

Thanks. Rubberlip (the fish I mean)


Rexxie on her Pepper

Member
My Sailfin Pleco!! Getting bigger each and every day. 6" now. Loves food and is a poop machine!!! I swear it is always pooping and some are disgustingly long! She is a character though. And wags her body like a dog when she eats lol! So funny! Love her!

Member
My Pleco chilling on a leaf! Her new favorite spot haha!!

Member
My red bristlenose girl is usually too shy for me to get photos (and cheap camera/ poor photography skills add to the problem LOL!) I was having a really sad day today but she cheered me up a bit by staying on her zucchinI long enough for me to snap a quick pic! Lousy photo, but beautiful little girl!!! I love her!!! She had her fins all up nice & pretty, but pulled them down when I got close ... I just barely got the photo before she swam off...

Member
My pleco just hangin around

Member
Aliray waiting to have her daily sweet pepper.

Member
This is my little munchkin Pleco called Percy who gets bugged by Vettel the Kissing GouramI who loves to play with Percy's tail - I am moving the pair of Kissing GouramI (Vettel & Hamilton) to another aquarium in a couple weeks due to Vettel's desire to irritate Percy and the rest of the fish....

Member
Percy Pleco and his nemesis....the moss ball...with his other nemesis Vettel looking on seriously unimpressed with Percy's efforts

Percy loves to push moss balls around, no matter how hard the job is, you will often find Percy upside down or right way up frantically trying to move the pesky moss balls.....on occasions you can almost hear Percy cursing when he realises the 4 mischievious Cory's are on the opposite side of the moss ball pushing it towards him, when he does move a moss ball the look on his face is priceless....a bit like a prize fighter who just knocked out his opponant

Member
here is my pleco

Member
Pleco of the day. I was trying to get a pic of the green phantom with the yellow fins/tail but it was not cooperative. So you get this one.
I really should clean the front of that tank.

Member
My new pleco! Just brought him home from the store today, a beautiful albino bristle. He doesn’t have a name yet 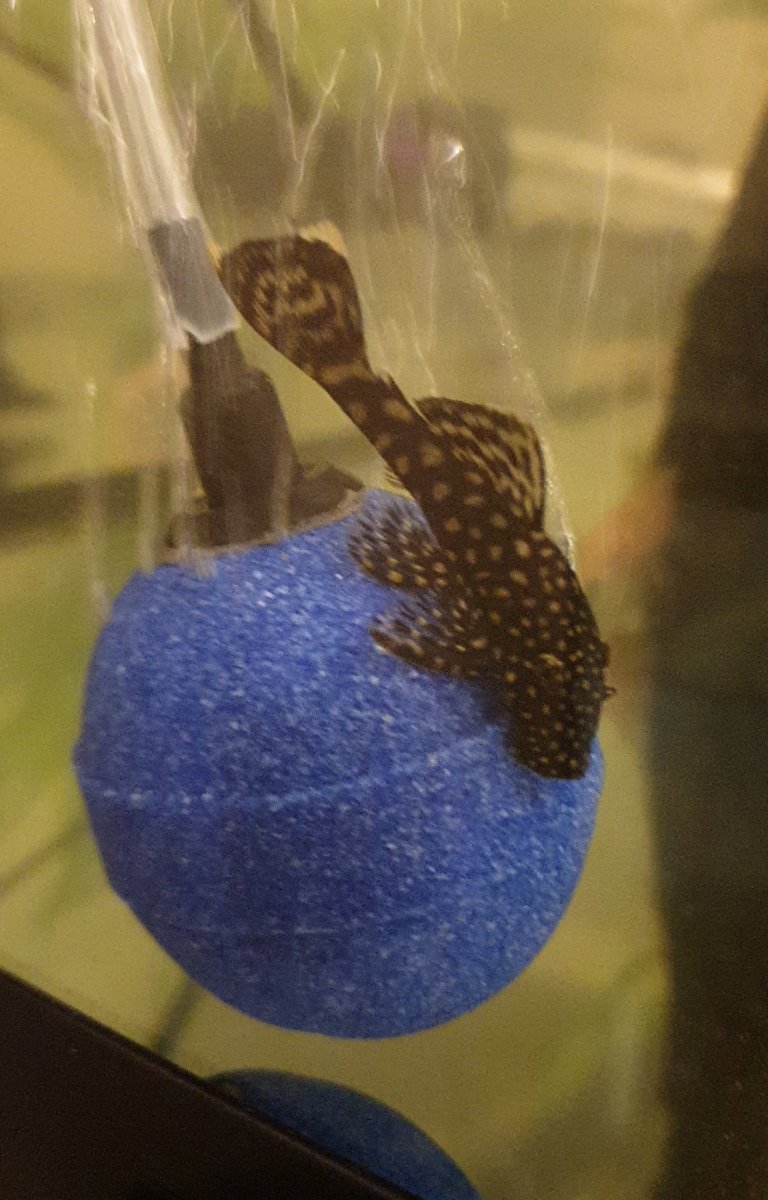 Member
My Pleco Percy has become quite vain in recent weeks.....just today I caught him gazing into his own eyes.....

Member
I visited Baby Barge at my LFS. Baby barge is my smaller Rhino I returned in a rental exchange.
Looks like they are not feeding him/her enough so I will have to bring a zucchini. The other fish is an adult low grade cactus.


Barge is in another tank and is MUCH larger. We are talking about me bringing in a carved jack O'Lantern for Halloween so Barge can eat/live in it.

And in the "Must not buy!" category the sunshine still lives there. I would buy it if they had 5 others for a colony. I love the body form of sunshines. 2 sunshines and 2 orange spots came in. 1 Sunshine still remains. Man do I want a group of those... I'd love a group of orange spots also.

PM and her minions

Member
Just got this little guy over the weekend! He's so tiny!

Member
neat morph/mutation. This is Eli. ElI is not old enough to breed. I'm not even sure of the sex yet.

Member
Went to the LFS to buy black worms. Managed to not buy a group of Queen Arabesques or Sultans. Did not make it out unscathed though.

My little boy (or girl) Jamal. I do believe he’s a boy though because he’s already beginning to grow his bristles and he chases my corys around during feeding time

Member
Here is a pleco being bad at cave. If you only leave a roof you have a gazebo not a cave.

Member
Here is my BN Jamal along with other crew members

2 plecos going back home. My kitchen table happens to have a cave on it, that is not a tank in the background.


Lets hope that discussions about cave ownership are handled maturely.

Member
If I am vewy vewy quiet, sometimes, early in the morning, if I act quickly after the room lights are turned on, I can spot my clown pleco sometimes. I finally got her to sit still long enough to get a photo!


Or maybe they are just jerks trying to collapse the other pleco's homes..
I need to try designing my own caves for them. Flat piece of clay with a raised area in the middle so they can find the raised area and then dig out their own cave. They love digging.

Oh and week 3 gibby. As they get bigger I'm really questioning if they are gibbiceps. Their dorsal fins are not close to what a similar sized rhino would have and they should be bigger unless they do not get the mighty dorsal fin until adulthood.

Member
Our elusive female BN who we call Plecopotamus, though we’ve debated changing her name to The Doctor since she’s declared the aquarium TARDIS to be hers.

Admittedly, she’s been much less elusive since I started offering her Repashy soilent green - she pops out as soon as her piece hits the bottom. She’s apparently not a fan of algae wafers, as she would never deign to leave her TARDIS for them.

Member
My elusive female BN. I hardly see her so these pics took a while!

Younger sibling, hopefully female. I’m growing out a few in hopes of getting a long finned female for breeding.

Or maybe they are just jerks trying to collapse the other pleco's homes..
I need to try designing my own caves for them. Flat piece of clay with a raised area in the middle so they can find the raised area and then dig out their own cave. They love digging.

Oh and week 3 gibby. As they get bigger I'm really questioning if they are gibbiceps. Their dorsal fins are not close to what a similar sized rhino would have and they should be bigger unless they do not get the mighty dorsal fin until adulthood.

I have a group of 6 juvie L134s and one insists on making his own cave between a watering spike and cracked pot. I also made my own caves out of slate tiles.
This was during a water change but you can see the maverick on the right. Homemade cave on the left.


Magicpenny75 said:
Yeah mine has a healthy crop of bristles but they are all short and not like a face-forest like some I've seen.
Click to expand...

Female BNs usually don't have any bristles or very short ones but they don't grow up the snout like males. My female BN is about 5" and has no bristles.

Magicpenny75 said:
Yeah mine has a healthy crop of bristles but they are all short and not like a face-forest like some I've seen.
Click to expand...

If they are going up his face then its a male, even if they are short. If they are just around the mouth then it could be a female.

Here's my bristlenose, stressed at my presence and patchy as always.

Member
My female BN made an appearance tonight so I snapped a pic.