Been having some trouble with my pleco this week. He first developed a white cover on his eye (which has now fallen off and left a cloudy eye with a red ring around it) then he developed a white patch on his face, and just last night I'm noticing some white patches developing on his body, some with a red ring around them. He's currently in a 55 gallon aquarium (I don't have smaller holding tank) with the rest of the fish. His movements have also become somewhat slowed and irregular.

The last couple days I've tried doing water changes to help clean the water if it's a level imbalance, and last night I just completely cleaned out the external penn plax filter. I have water test strips showing up in the mail tomorrow, as well as Melafix and Pimafix, which I'm going to start treating the tank right away with (left the carbon out of the filter last night in anticipation of the treatment).

Anything else I should look at or should try besides what I've mentioned and hope for the best? This is my first time having issues like this, and I've had this pleco for a couple years now and would really hate to lose him. The picture is from this morning. Thanks for your help! 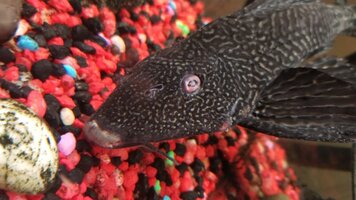