I woke up this morning to find my Plec dead. I have been a fish keeper for 10 years so please refrain from the replies of what food am I giving, other fish in the tank and the water quality.

This particular tank has been established for around 2 years now, its a community tank with your norm zebra, tetra's and two clown loaches.

You can see from the picture below that this looks strange. One, the huge hole in his lower stomach. Also, when I picked him out with the net, that other little fish was attached to the net. My theory is that somehow, the plea accidentally ate the small fish and was in his stomach and he wasn’t able to get it out of his system, so his stomach exploded. Or, he contracted some kind of disease, died and the other fish started eating his stomach and caught some kind of virus (unlikely). The small fish was hard and crusty. I think it has been in the Plecs stomach. He also has that white froth under his throat between his gills. Not entirely sure why that is. I hadn’t noticed anything different from him at all, eating normally, algae and cucumber. 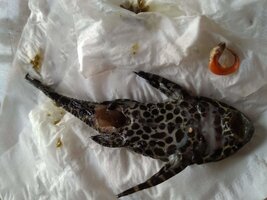 Sorry, but we have to know everything to know what could of happened. We can't diagnose without asking about the details.

What was the tank size? Filtered? Heated?
What type of pleco?
Water parameters?
What did you feed it and how much mow often?

Looks like a Bacterial pit / ulcer. Not too common. Really no viable treatment. My guess is most fish die before the crater developes.

That is what I would think too. But the little fish?

Sorry, but we have to know everything to know what could of happened. We can't diagnose without asking about the details.

What was the tank size? Filtered? Heated?
What type of pleco?
Water parameters?
What did you feed it and how much mow often?
Click to expand...

It is only a 3x2x2ft tank. Filtered and heated.
Common Pleco
80F
PH 6.9
Ammonia and Nitrite - 0.0
Nitrate - 30 ppm
Alkalinity 5KH
The only thing I feed the Plec which he shared with the two Clown Loaches is a quarter of a cucumber every 2 weeks. Most of the other time he eats the algae and to be honest, didn’t do the best job in the world. But was always fine and didn’t over eat.

Ok, so the problem may be that you don't give him regular feedings. Plecos will not thrive only on algae and cucumbers, and in maturity, common plecos prefer meat products to eat rather than algae.

Any idea what the other fish is?

I seriously doubt a regular aquarium fish could survive inside the stomach/digestive tract of another fish... I mean - most fish EAT fish...

The huge hole could be somebody ate him after he died.... Fish are quite opportunistic in terms of food sources..... In my tank - if I don't catch a dying fish - I will find a mostly eaten dead fish soon after.

My "gross but plausible theory" is that your pleco died from some sort of internal parasite/intestinal blockage... Fish #2 died from eating the intestinal parasites of Fish #1...

That’s a large hole. Was it there the day before?

How would you describe your fish tank smell?