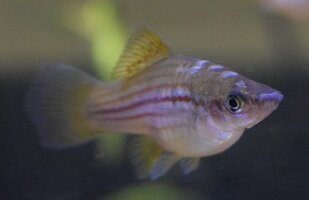 If anyone can identify what might be wrong with the swordtail in the picture I'd really appreciate it. A couple months ago another swordtail had what looked like this same condition, but only in a single spot, not multiple. At the time I thought it was simply an injured scale, and it got better within days. Now I don't know what to think.

She lives in a 55 gallon tank with about 25 similarly-sized fish, two yoyo loaches, a bristlenose pleco, and a bunch of tiny "pest" snails that snuck in on plants, as it's a planted tank.
One of her sisters has a single discoloration spot that looks the same as this. A couple of the other fish have small tears in their tails or top fin, but no signs of fin rot. The biggest one, who happens to be everyone's mother and the oldest of the bunch, has the tiniest white spot on her top fin. It's so small I can't tell if it's fuzzy or anything.

The water parameters are all great except for Nitrate levels, which are just barely above "not a problem whatsoever" levels at about 4 ppm. Ammonia and Nitrites are nominal.

The tank has 2 submerged filters and is kept at 77°F, but I've lowered it to 76 since discovering this, as my first thought was that it might be columnaris, which does better in warmer temperatures.

The tank is well established, and these fish have lived in it for over a year. I've been keeping fish for about 4 years now and have seen a few different illnesses, but I can't even find a picture online that looks like this. It's early and I hope it turns out to be nothing serious, but in case it is I want to try and get ahead of it.

Thanks for any help you can give me.

I'll also try to fill out the template below in case someone asks about something I haven't mentioned. It's probably easier to find information this way too.

Tank
55 Gallons
Running for over a year
2 bubble filters fed by air pump, smaller submerged filter up top used as a "fish treadmill"
2 heaters, temperature controlled within 1°F
Temperature was 77°F, now set to 76°F
25 female (for now) swordtails averaging about 1.5 inches in length, 2 yoyo loaches, the biggest female bristlenose pleco I've ever seen (6.5 inches) and hundreds of tiny "pest" snails. I think they're malaysian trumpet snails? They're only about 5 mm long at most.

*Parameters - Very Important
Tank was cycled
Water was tested with API Freshwater Master Test Kit, the kind where you add drops of chemicals.
What are your parameters? We need to know the exact numbers, not just “fine” or “safe”.
Ammonia: 0 (or at least nothing that registers on the test kit)
Nitrite: 0
Nitrate: 5 ppm
pH: 7.4

Feeding
Fish are fed flakes and granules 3 days a week, frozen bloodworms once a week, and peas once a week. They're fasted on Tuesdays and Fridays, and there's almost always a couple slices of vegetable (cucumber or zucchini) in there, which are replaced every few days.

Illness & Symptoms
I've had the sick fish for over a year. I think 14-16 months.
I noticed the symptoms only yesterday.
She has patches of white discoloration on the scales above her head.
No treatment has been started yet.
The fish was born in this aquarium.
Behavior has not changed.

It looks to me like your fish has a fungus. I would recommend treating with a good fish med such as Tetra LifeGuard. Stay away from the "fix" meds (i.e. primafix etc). They are all herbal meds and you need a good antibiotic.

Don't forget, if treating with a med, you need to remove the carbon from your filter (but not the floss or sponge), since carbon removes meds from the water.

It looks to me like your fish has a fungus. I would recommend treating with a good fish med such as Tetra LifeGuard. Stay away from the "fix" meds (i.e. primafix etc). They are all herbal meds and you need a good antibiotic.

Don't forget, if treating with a med, you need to remove the carbon from your filter (but not the floss or sponge), since carbon removes meds from the water.

Thanks for the reply, and the welcome. Do you have any idea what kind of fungus it might be? I can't identify any that look like this. It also doesn't look raised or fuzzy or anything, so what makes you think it's a fungus? I don't mean to sound like I'm not thankful for your advice. I'm just trying to become better at diagnosing my fish and being able to help others like you're helping me.

As for medications, I was thinking it seemed mildly like columnaris, which I've read is best treated with a combination of Furan-2 and Kanaplex. I know that can be tough on a fish's kidneys though, so I was considering starting with something like API General Cure or Erythromycin. I also have API fungus cure. I've never used anything like Tetra Lifeguard before. Do you think it has an advantage over everything else? If so I'll definitely get some immediately.

It was difficult to tell from the photo whether the white spots were fluffy or not. If they are not fluffy, then I would go ahead and treat with either Furan-2 and Kanaplex.

LifeGuard is just what I had success in the past with, but I was treating the cottony fungus, or mouth fungus.
Upvote 0

LifeGuard seems like a good broad spectrum that I'll get for the future, but I don't think I can dose the tank with it because it's not good for scaleless fish. Good for a quarantine tank though, I'm sure.

Thanks again. I really wish I could identify whatever it is, but I don't want to delay treatment.
Upvote 0
You must log in or register to reply here.

Potential ick on Swordtail Assistance would be appreciated