guys/gals there have been several members buying/using/asking questions about certain plants. Mainly ones with Rhizomes. So here's a few pics.Hope it's helpful

Java Fern, Bolbitis heudelotti, and Anubias all have something in common... they all have Rhizomes -the stick looking part that leaves grow out of.
Here are a few pictures explaining how to divide them and attach them to rocks or wood.
The Java Fern rhizome as well as the Bolbitis rhizome are very stick like and woody. a sharp pair of scissors are good for dividing these two.
Both of these can be attached to wood or rocks using cotton thread(will rot and fall off by the time it's attached to object) or rubber bands. The rubberbands will eventually break and fall off. Make sure the Rhizome is firmly pressed aqainst whatever you are attaching these plants to.
1)Java Fern 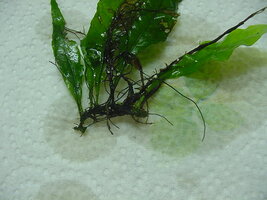 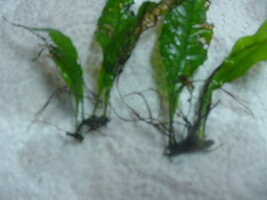 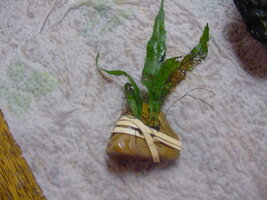 4)Java Fern and Bolbitis attached to wood with rubberbands 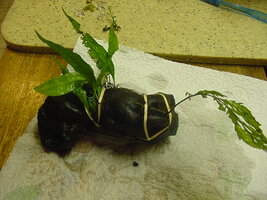 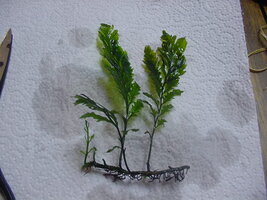 The rhizome of Anubias is different than Java Fern or Bolbitis in that it is very fleshy and bruises easily when divided so a sharp knife makes the job easier. Please be careful when using sharp implements Scissiors tend to pinch and bruise. Where it is bruised will get mushy and die, sometimes the whole plant will die.
This piece of Anubias Coffefolia had some algae on it so I soaked it in Peroxide(like you use for cuts) first and rinsed. If you don't rinse good and peroxide gets in your tank it is perfectly ok. The peroxide will combine with the water and make... water
1) Anubias with algae
2)Soaking in peroxide
3) After soaking in peroxide
4)Cutting Anubias with sharp knife

Anubias can be attached to wood, rocks in the same manner as Java Fern and Bolbitis. An other way is to lay the rhizome on the substrate and lay a rock or something heavy enough to hold it down. In gravel anubias roots will attach to the rocks as you can see in the pic of the anubias being cut this one has rocks in its roots
These are all low light plants. 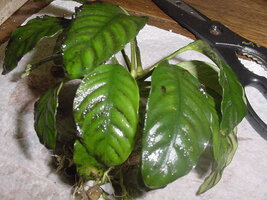 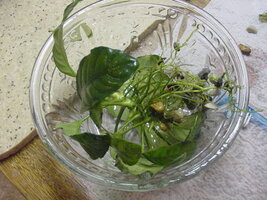 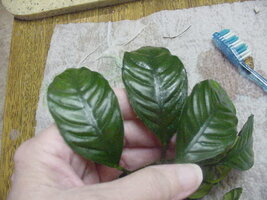 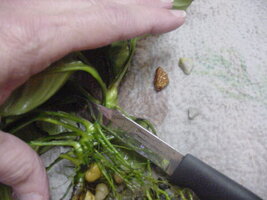 Cryptocoryne (crypts) have rhizomes also. Since I needed to divide this one I thought I would share.
1) The leaves of this crypt were tangled and had gotten smaller indicating a need to be divided. This is crypt Wendetti.
2) The tangled Rhizome.
3)Separating the Rhizome. Use a sharp knife or a pair of sharp scissors. If bruised the Rhizome may rot and the plant die.
4) Separated 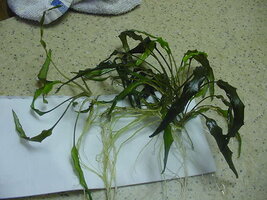 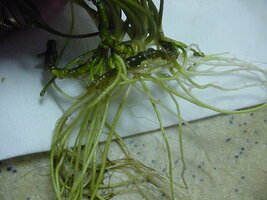 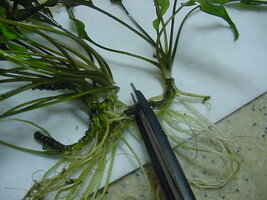 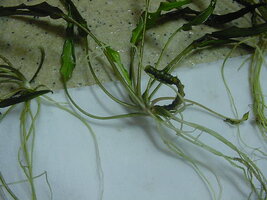 After dividing plants remove any torn or damaged leaves. I always trI'm the roots also(about 1/3 to 1/2 of total root length). This stimulates them to have a growth spurt after planting.
when planting plant the roots but not the rhizome. I usually place a small rock over the roots to give it a chance to take hold.
Remember Crypts don't like to be moved and they may melt(the leaves die)but they will come back. If I get them back in the water and substrate soon after dividing I don't have too much problem.
1) Trimming roots
2) All trimmed
3) Planted
4) The Clowns checking for food 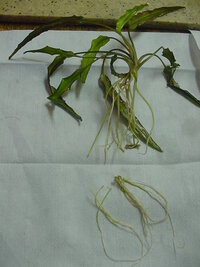 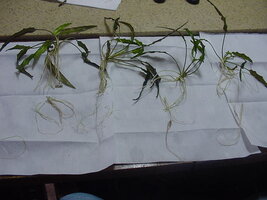 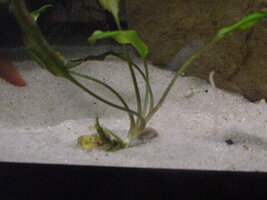 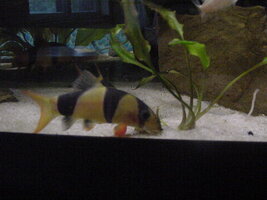 DIY Acrylic Tank Refinish -- Before and After