I am experiencing nutrients deficiency where all my plants have start rotting/dead pinhole in the middle and spread throughout the leaves, I suspect it's a potassium defiency. The plants are currently in a 20 gal freshwater fish tank.
Lightning : Hygger 14W Full Spectrum Aquarium Light for about 6 hours a day( I made a fixture to hang it about 10 inches off the top of the tank)
Substrate : Mix of gravel and eco complete.
Parameter : Ammonia=0, Nitrite=0, Nitrate=40, temp sitting at 74-78.
Fertilizer : Macro : Dry ferts mix from Nilocg (KNO3 ,KH2PO4 ,K2SO4) since my tank is low tech I only mix 1/3 of the recommend measurement into a 500ml RO/DI water bottle and dose 5ml (MWF) ; Micro : Flourish(TTh)
Plants: Anachris, Java fern, Anubias nana, Moneywort, Banana plant, water wisteria.

Please give me advice or information, much appreciated!

I'd increase the hours of light they are getting to at least 8. This is far more likely to be your problem. Another thing to consider is water hardness. Can you measure that for us? Most test kits call it gh. I'll tell you if it's in the range you want. The kh and pH are also parameters that would be useful to know.

On an unrelated note, your tank looks amazing! Great aquascaping. The only livestock I could see in the pictures were a mystery snail, a nerite snail, and what I think is a ramshorn snail? It's hard to tell from that angle. Is there anything else in the tank?

On an even more unrelated note, I'm assuming you got one of each so they won't breed. This is a mistake in the case of the ramshorm snail, which can reproduce without mating, and the mystery snail, which can store sperm for up to 3 months. This means that your ramshorn snail is guaranteed to reproduce, and may have already. The mystery snail will only be a problem if it's female and you keep the water line more that one and a half inches from the tank edge during the first three months. The nerite snail, which requires very special circumstances to reproduce, isn't a problem, no matter how many you get.

Sorry for the long post. I hope at least some of it was helpful, lol.
Just realized I forgot to explain the "more that an inch and a half from the tank edge" bit. Mystery snails lay their eggs out of water to avoid predation. If there's not enough room for them to leave the tank, they won't lay their eggs.
Upvote 0

Thank you so much for your kind word, this is my very first aquarium ever so I'm super stoke someone enjoy my aquascape as me! And I will try to increase the light periods to 9 since the timer built into my unit is 3/6/9 increments.
PH : 7.8
KH : 5 drops
GH : 7 drops

In this tank I currently have 2 mystery snails( 1 Ivory and 1 purple? I'm not too sure how to ID since it have brown top purple footing, I will attached some picture with horrible angle since it's hiding behind an almond leave), 1 horned nerite and 1 tiger nerite, 3 otocinclus fish, 5 blue dream shrimps and 4 ghost shrimps(permanent resident). I recently just set up a 10 gal for new year with the intention of moving the blue dream shrimp over once the cycle is complete with the intention of raising a lasting colony for years. Then I will get some fishes, I have not made up my mind about what kind of fishes yet, preferably schooling tho.

About the snails reproduction, I did do quite an intensive research to pick snails for my tank since I have heard a lot of complaints about them taking over so I only set my eyes on the nerite snails because the young require brackish water to guaranteed survival, but at the same times I figured heck why not add some mystery since they look so interesting when active! 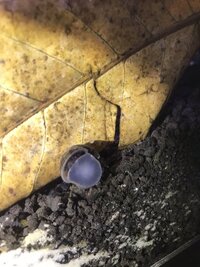 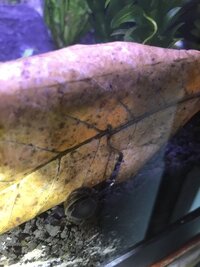 By kh and gh, I wasn’t talking about how much you add. You need to test it so you know the ppm. Its kind of important, especially for some fish, to have an exactish number. And it appears I misidentified your snail, lol. In my defense, the angle was bad. Yeah, that's a mystery snail. If you keep the tank pretty full, as in less than 1.5 inches difference between the tank rim and the water level, odds are they won't breed.

Oh, and I almost forgot, your pH looks great!
Upvote 0

This is my main tank right now filled with tap water, last time I test it come with 20ppm of nitrate so when I do a water change I use RO water but if my parameter is incorrect and next change would I be able to adjust it with SaltyShrimp GH/KH+? I purchase this for my new 10gal which I'm waiting to cycle so I could move my blue velvet shrimp over to establish colony. As of right now I have not seen my ghost shrimp bother the small blue velvet in anyway at least in an aggressive manner. I do try to keep a close eye on the occupants of my tank to see if they're doing well and so far all is great beside the fact that my blue velvet have not really breed but one of my large ghost shrimp is currently berried.

As for the mystery snail, I would not mind having them breed since I am kind of curious what color will the offspring be coming from gold+brown mystery snail parent that is if they are even a male+female pair haha
Upvote 0

Apr 12, 2018
appcontrol
Amazon sword plants lacking something, but what?