i have established an indoor fountain bowl of approx 12 gallons for over six weeks. it has two full spectrum 15 watt overhead lights as well as an additional grow light. the bowl is equipped with a subgravel filter and an aquaclear 20 powerhead which i have set to flush water on the surface creating a two current flow against a large upright rock in the middle of the bowl. 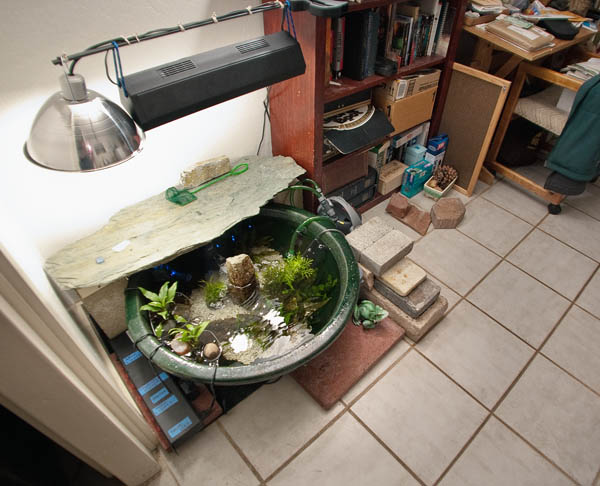 additionally i added a 2232 eheim ecco cannister filter with the media that came with it... you can see it in this . i placed a #1 filter max pre filter over the intake hose... 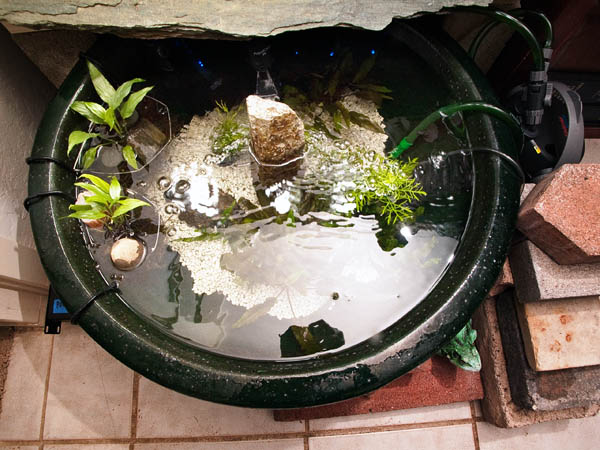 early on i began filling my bowl with plants; peace lillys in baskets on the surface, water sprite, sword leaf, Lilaeopsis brasiliensis, wenttii, et. al.. i even bought a nymphaea bulb at walmart but after 3 weeks it got a white fungus so i put it outside in a bucket for full sun to see if it will flourish... it certainly didn't in the fountain. 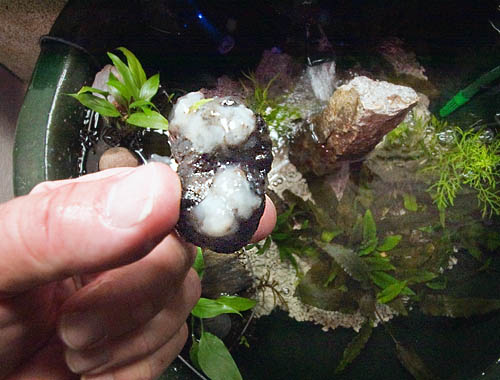 about a week before i got the nymphaea bulb i purchased 5 algae shrimp... they appeared to love the plants and climbed all over the nymphaea bulb appearing to nibble at the hair like threads all over it... but alas... some of them perished, the biggest by misadventure, since i found him/her on the floor one room away... another i found dead on the gravel bottom. lately i thought i had only one left since that's all i've seen for days however yesterday i spotted another so now i know i've got at least two. they sure are hidy critters. 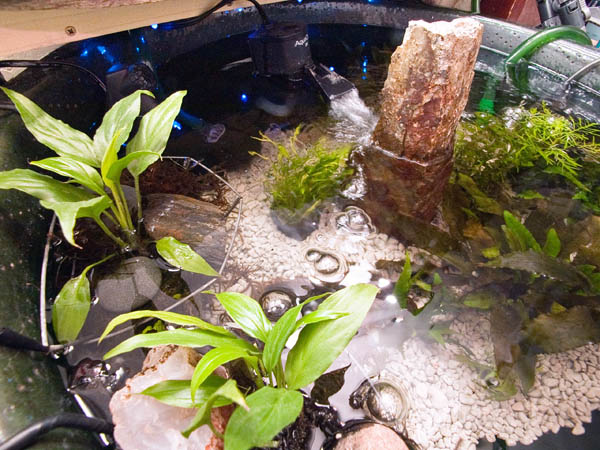 also i've got a CO2 thingy (sugar yeast and water) that expels via a plastic ladder thing hung from the inside of the bowl. and a rena heater that is set at 72 degrees.

finally, (pardon my long post) i'd like to establish some cherry shrimp in this fountain. i've read that they are the easiest to keep for a beginner. so my question is do you think this fountain would support cherry shrimp? how many and where should i get them? i live in southern oregon. 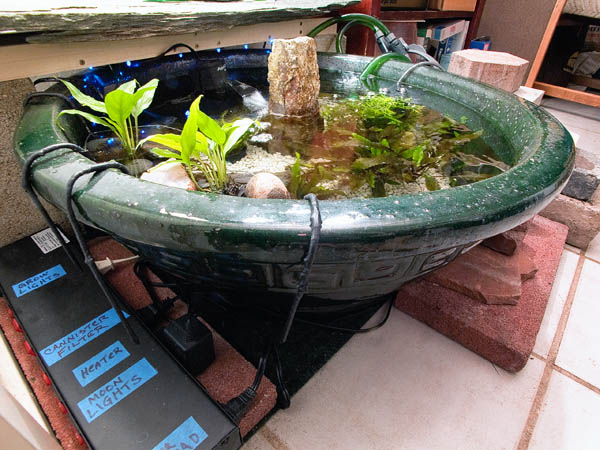 if i've left any pertinent information out pls let me know. i hope the CS will not be travelers like the one algae shrimp appeared to be... since i'm not going to cover this fountain.

i can't seem to find any moss in my local... i've read that some varieties of moss are a favorite food of shrimp. Can anyone advise a growable food for cherry shrimp. short of that what would be the best way to feed them in a setup such as mine?

tws - a speck in a ruthless cyber sea...

Cool setup! Shrimp may, or should I say will, climb out with no lid. Even on one of my covered tanks a bamboo shrimp squeezed out a litlle hole for my second filter and made it about 16 feet, then he died. Rcs are easy to care for, I'm just not sure on the whole "escape plan"....

i do plan on growing more plants above the bowl on the rock shelf... maybe some bamboo, a bonsai and Papyrus grass...

Welcome to the forum and I have to say that I'm loving your little planted fountain. It's a great idea you've come up with and looks amazing. So sorry for your shrimp loss.

i have a picture in my mind of a cool green corner in my basement flat... orginally i had set up a fountain in a plastic bowl outside in my patio... i set it up several years ago for a feral cat named dolly who came to love us... however the raccoons came and trashed the fountain one night so now i'm trying to set this up for dolly again indoors before the summer heat comes. 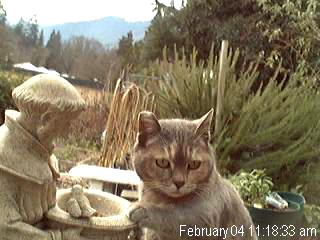 You may be able to find a species of fish that you could keep in there... I don't know anything about pond setups.... like I said, really cool looking.

yeah... i understand a fish like an otto will eat only algae and might do well in this bowl setup... they are small and will clean the leaves of aquatic plants i have read.

i'd sure like to have shrimp but it does not seem feasible with a giant open bowl...

i wonder if all shrimp species will crawl out?

anyway for your entertainment here are a couple of videos i made via a webcam:

the first is big mean mama keno the split eared raccoon susing out my outside fountain when i put dry ice in it...


this second one is the morning after keno had her litter of kits rampage the fountain and dolly investigating the cleanup...

i hope to set up an indoor webcam if i ever get dolly to rest on top of the green rock shelf in this new indoor fountain.