I've on the march to try and make a planted tank. Long story short, the only plants I've been able to keep alive longer than a month is a Amazon Sword, corycombas of some sort(not sure it's going to make it), Bacopa M.(same thing) and a stem of Water wisteria, and possibly some Christmas moss(another we'll see). And Algae of course! I've got a few plants that I'm testing out, that I don't know if they'll make it. And before someone suggests Java Fern, please don't! If anyone needs explanation on that one, I'll happily give one!

That and I have really hard water. PH is 7.6 out of the tap and 8.0-8.2 depending on what tank you're looking at. So any suggestions?

Well, what plants have you tried and what issue are you having with them?

Crypts? I have hard water too. My sword is taking over my 29 (dirted tank), as in sprouting runners like crazy. The crypt is on the other side of the tank and it's OK so far.

Well I'll start off with Java Fern. All the leaves die off despite using Flourish once a week. It's been like this for about three months I think? No change. Then I ordered from Dustin's fishtanks, got a few from them on the 5th, and same thing happened.

Water wisteria, I had a bunch of it, and took it out of my big tank to do a deep clean on the tank since I couldn't figure out why fish were dying. The only stem that survived was put in my quarantine tank w/ a bare bottom. It's doing soso because the only light that it's getting is indirect light. The stems that were left in the bowl with dechlorinated water, were in stagnant water for about a week before being put back into the tank and they all died within about 2 weeks or so.

I tried ordering from Dustin's planted tanks, got a variety of plants from them(same order as mentioned above). A couple of them I could never ID, and most of them died in two weeks. I think it might have been because I cycling the tank at the time and had no media that I could use to jump it. Between the ammonia being sky high and having no nitrates, the plants couldn't make it? Not sure, I know that I had some Val Asiatica Biwaensis (Thick Corkscrew val) and some sort of Bacopa, and Alternanthera Reineckii(Last two are still hanging in there, not sure if they'll make it, and I'm not sure that's the correct ID) and there was another plant that didn't make it but it wasn't IDed.

I bought some what I was told was guppy grass on Friday a week ago, and was able to put in my tank the following Sunday. It's tangled on the other plant. And the guppy grass is not looking too hot. 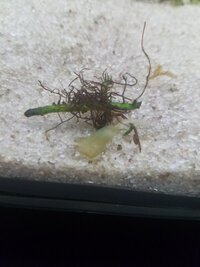 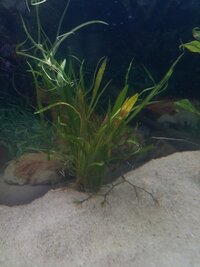 Amazon sword is finally starting to look ok, going from emerged to submerged. When I bought the Flame Sword on Saturday, I bought a bunch of other plants that I failed to write the names down including a moss(Java perhaps?).

Süsswassertang I also got on Friday, seems to be doing ok, I just hope I didn't introduce BBA.... My phone is having issues with loading photos so I apologize for double posting. I also bought some sort of Anubis.

my advise: google easy plants to use in aquarium.

I have had the bamboo in there since Feb and they're at least an inch+ taller. 7 cory cats and 5 female bettas in there currently.

the reason I say this is because I was dropping $50 to 100.00 at petco on plants, but getting lackluster results.


Purchasing cuttings that were simple to use, easy care made it a lot easier.

I have no interest in c02, because I know I'll mess up & kill stuff.

I do have a plant light & glass lid, I feed the plants maybe 1x a month. They're doing well. It was a snail free tank ( i keep removing baby ramshorns) . But I did add 1 mystery snail last week & I'm keeping an eye on him (it is a male) because they shred my plants in the 38 gallon even if I feed them broccoli or cucumber daily.