I just purchased a 90 gallon tank to put a betta sorority in. I have had lots of individual bettas and a couple 30 gallon community tanks (always with a betta as the centerpiece) but never a 90 and never a female or more then 1 betta. I think I am going to order some exotic baby females online. I would love to pick each individual fish, but I think in the interest of making things easier I will find a breeder I like, and ask for a yet to be decided number of young females that are distinct from each other in color and pattern.

I can't think of any particular questions, but if anyone has any experience buying lots of females from a breeder or having a 90 gallon sorority I would love to hear it. The only things I have decided on so far are that I would like a sand substrate to contribute to a clean beach look, and I am trying to avoid tannins for the same reason, but may concede if I feel like its necessary. I have always used driftwood in the past with community tanks for its calming effect on the fish, but I usually don't include it in tanks with just one betta because I like the look of a colorful betta in crystal clear water. I also have about 3 backup tanks available to me and the ability to partition them into as much as 6 individual areas for any fish that are too aggressive. Im a member of a local fish group and if I end up with more non social fish then I can individually house I will partition them, and sell or give away the ones I cant keep. I plan on getting some nice specimens so I figure it will be one or more persons lucky day if I am forced to rehome some of them.

I will reward your friendly bump with pictures of my progress. I like things shiney so I refinished the tank stand. Things are slow going at the moment because I am doing things methodically. I have a canister filter in the mail. I am taking the time before it gets here to research and decide on substrate and plants. I think Im gonna go ahead and get a big piece of driftwood and let those tannins flow, I just don't think the "clean beach look" is achievable with a heavily planted tank, so I may as well enjoy the benefits of tannins, hopefully it'll make the fish chill out and be more likely to get along. I think I can still make it vibrant and colorful. 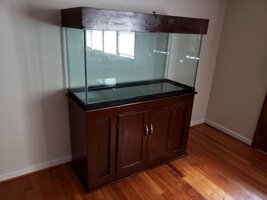 
and now 20 gallon with 5 female Betta
38 gallon tetra community has 2 female betta ( they get long, I usually use 3 but these are my top dominant female bettas fish) I removed the odd girl out 2 weeks ago

1 10 gallon with 2 girls , sadly princess Peaches - red crown tail I had been nursing passed away a few weeks ago.

the biggest issue is visibility into the tank to observe dynamics between the girls.

Lots and lost of plants, hideaways & bridges to help define space so territory can be set & flee as needed

Bonnie is seriously chill ( had her 16 months). Bonnie can go anywhere. she's big but never pushes.
Ginger is small & picked on. she woudl hide so she'll be with Bonnie. But if Bonnie tried anything , Ginger will be solo in the 10 gallon.

since bettas so breath air, I'd watch and make sure they can reach top surface because that's a very deep tank.

The one thing I read was that similar color bettas get along best.

Just be ready to move any picked on fish - they'll hide & only show up at feedings.

I just painted the back of the tank, I faded the paint from dark to light blue. I've never painted anything on the back of glass, so I'm not sure how it'll turn out. 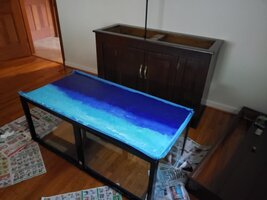 I also got a filter booster attachment and some biological filter media for my canister media called "biohome". Its a very porous rock thats supposed to harbor anaerobic bacteria that establishes a more complete nitrogen cycle by turning nitrates into nitrogen. Right now I am thinking hard on how I want to scape it, and I'm taking all the time between now and when my filter upgrades arrive to make up my mind.

Things are kind of dragging out, but I am not in a rush. I have thrown together tanks in the past only to realize I could have done something different or better, so I am taking my time and thinking every detail out carefully. This will be my biggest tank ever by far and I don't want to have to move it or change things around alot once its full.

Just dropping some pics from my recent tank progress. Things are slow going because I'm still waiting on my biohome filter but I have been using the time to make various small tank improvements. Attached is the pic of the back painted and the DIY glass lids I made to keep my bettas from jumping out. I cant wait to fill it with water, plants and fish! 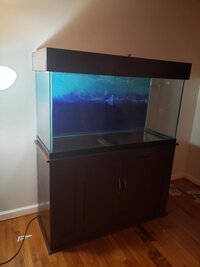 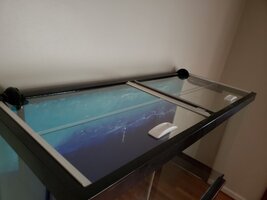 I like your paint idea. Can't wait to see how it turns out.

What else will you be stocking? Or will it be bettas only? It seems like, with such a large tank, the bettas should have no cause for aggression. It will be interesting to see how that plays out to.

Thanks for the compliment. I was experimenting with the paint. I applied it with a sponge in am effort to blend it. It didn't turn out how I expected but I do like the way it looks. This tank will be clear water but my next tank is gonna be tannin water tank with wild bettas and I thought about doing a similar method but with yellow at the top and brown at the bottom. Both tanks will be in the same room and the other one will be a more tall then wide tank so I think they will compliment each other well

As far as stocking is concerned, I would like to have a couple mystery snails and probably 6- 10 Corydoras and a handful of shrimp. I like guppies but I have never been too good at keeping them alive so I may go with some kind of tetra instead. I basically want one other school of fish slightly above the recommended minimum for a happy school as dither and a good interesting spread of bottom feeders. I want about 20 bettas in there so I think they will take up about half my available stocking space filter wise. I may even do 25 but if I do that I'll probably have to keep my dither and bottom feeders to a bare minimum.

I think finding females all from the same batch of fry is supposed to greatly increase chances of success. So I think you're on the right track with looking for a breeder over choosing individual fish.

Yeah I initially was hesitant to pick a batch of sisters that all look the same but I have seen some videos of groups of sisters that are all different variations of the same color and they looked pretty good.