Pics of my barbs

Check out my barbs. Right now I have: 6 tigers, 4 rosies and 2 cherries. I still need a background for my tank, it'll be nice to look at it without those chords in the full view lol. 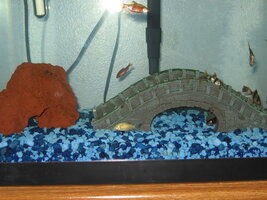 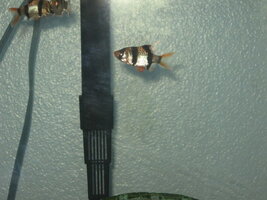 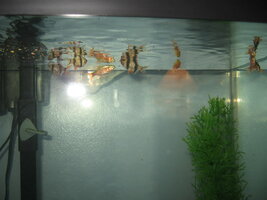 Thanks Bonochica! I love my barbs! I've added a background now and new decor and I think my community tank looks a lot better. I'll probably post updated pics of it in the Members Fish Tank section later.

Aww ... they're all so cute I always wanted some cool barbs but I know they're fin nippers. Since I already have Angelfish in my tanks, I can't have any barbs with them (except for Cherry Barbs) :-\

Oh you can have cherry barbs with Angels? I didn't know that. I might do that in my next tank. For my next tank (55 gal) I want angels, rainbows, loaches and one school of fish. At first I thought about a school of larger tetras but maybe I'll use cherries.

Cherry Barbs are BEAUTIFUL And in my experience, I've NEVER seen them nipping at my Angels' fins. They're ones of the most peaceful freshwater fish I've ever seen. Though I have to tell you they don't school as readily as Harlequin Rasboras or Zebra Danios for example. Some fish will school to the point where they all align their bodies in the same direction and at the same time, like they're one fish (which looks amazing). Cherry Barbs don't really do that, though they do stay, more or less, in one group. If you want Cherry Barbs with Angels, have at least 5 - 6 of the Cherry Barbs.

Here are some of my Cherry Barbs

Algae Management and Algae Myths in the Planted Aquarium