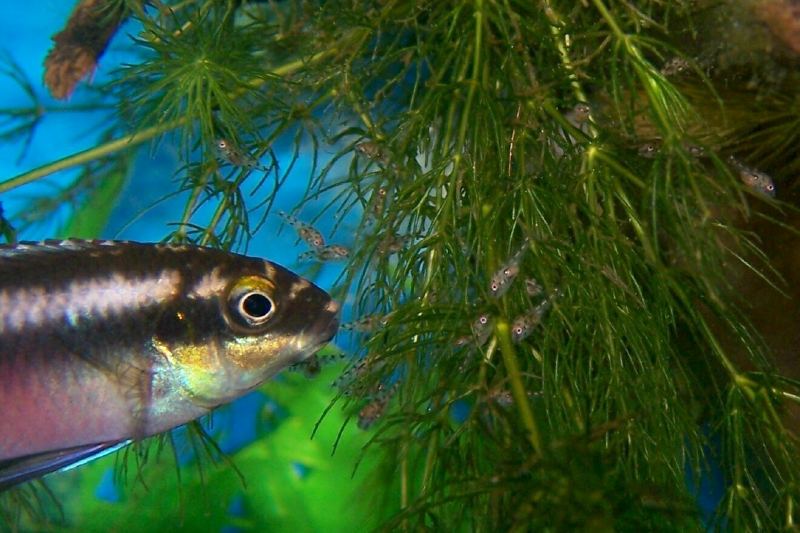 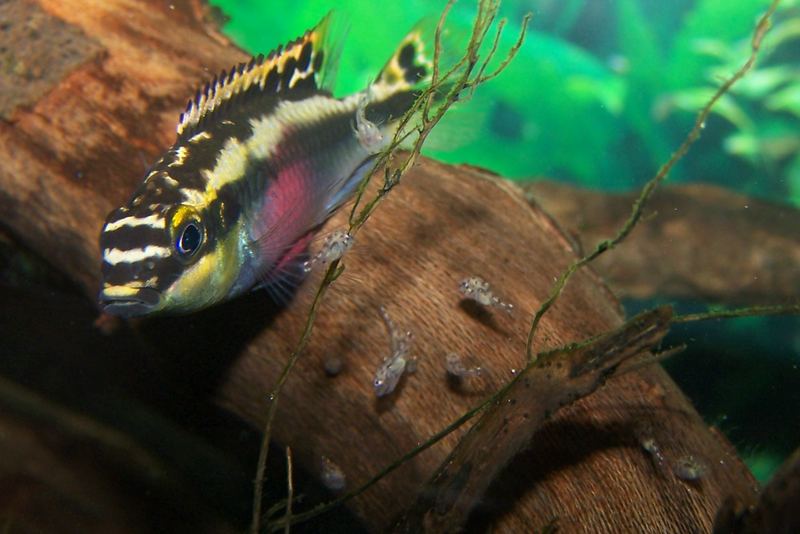 aw, they are so cute!

They're adorable! The parents won't eat them?

The batch of fry started out at around 50, now it numbers around 12. I've watched some weaker small ones in the bunch as I've been studying them. Daily the number dwindles, so I don't think it's the parents eating them just for the sake of eating them. I think it's just survival of the fittest at this point. Both parents are really doing a great job. Mrs still brings all the babes into the cichlid stone at night.

I'd have to bet that not all 12 left will survive, however, they look pretty strong to me. They're actually starting to swim now, versus just wiggling their bodies around to get somewhere. They actually have direction now.

The parents did eat the first batch. This is the second. So, maybe they've matured as parents? Time will tell....

They are just so precious little darlings!

I can't believe how these little dudes (and dudettes) are zooming around the tank. The parents can barely keep up!

And their munching on everything in sight. Maybe they're actually locusts..... :shock:

How cute
You're right they kinda do look like little puffers

I hope you have some survivors LyndaB! Beautiful fish and fry!

Great pics.
They are soooooo cute. Won't the mommy eat them??

Kribs often eat their first batch or even first few batches, from what I'm told. This is this pair's second spawning and the remaining dozen seem strong, as of this morning. Parents are still being very responsible.

Beautiful babies Lynda! My spawns usually dwindle down to the strongest 12-15. Now I have two tanks full of babies Good luck! they are delightful fish.
Carol

Think I need some shipped my way.

If I knew how to ship fish, I'd be happy to send you some.

I'm definitely down to 3 fry. But they're looking pretty good. Eating well. Still being protected by mom and dad. Now we just sit back and watch.

Good luck with the survivors. Although it's depressing when you see the numbers start to dwindle down, a few fry are much more manageable as they get older and you look for a spot in your tanks for them.

Thanks, Lucy. The way I look at it is that this bunch of fry already out numbered and outlasted the previous spawning. So, we're definitely moving upward.