Pearl Gouramis in a 50 gallon tank?

Motherlovebetta
I have a 50 bow front tank it has 12 harlequin rasboras and 11 albino cories. I am wanting to add some pearl gourami to it. I have only ever had powder blue dwarf gouramis and the girl at the LFS said these are more peaceful. However, they only ever seem to have males. Would it be ok to stock 3-4 pearls? I read that they like company but does they mean from other pearl gourami or just other fish in general? I am worried about putting that many males together. Would I be better off with honey gouramis in a bigger group if I can get some females?

TheAnglerAquarist
I wouldn’t do multiple males without females
awilkinson871
Even the sweetest gouramis will often fight each other if there is more than one male.
Motherlovebetta
Ok, thanks! Any idea of where to get females?
ProudPapa
I'm surprised you were told that they don't have females, especially since the ones I see in stores are usually too young to sex.

In any case, while I won't disagree that it's probably best to have more males than females, it may not be necessary. I've had 9 pearls in a 40 gallon tank since January of this year. I bought them at different times, and wanted no more than 1/3 males, but they were too young to be sure when buying them. Now that they're approaching maturity I have at least 6 males, and maybe 7. So far there haven't been any issues. The tank is always moderately to heavily planted (depending on whether or not I've recently pulled out guppy grass and water wisteria to sell), so there are plenty of sight breaks and hiding places, which probably helps.

See School of Pearl Gouramis? | Aquarium Stocking Forum | 479129 if you're interested in following the experiment to see how it works out.
Motherlovebetta
Thanks I’ll head up there and check them out and see if I can tell a difference. Nice post about yours!
YellowGuppy
You shouldn't have any difficulty adding a few pearls to that setup, but jinjerJOSH22 is my go-to source for all things gourami - trust him before you trust me on this one!
jinjerJOSH22

You shouldn't have any difficulty adding a few pearls to that setup, but jinjerJOSH22 is my go-to source for all things gourami - trust him before you trust me on this one!
Click to expand...

Agreed, and a group of the same species, whether you pick Pearls or Honeys.
Motherlovebetta
Awesome, I got two today for that tank and two small honeys for my 15. Any idea what sex they are? 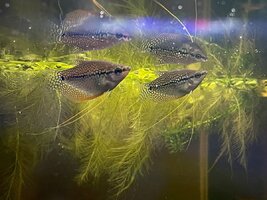 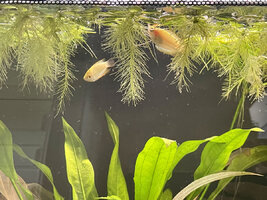 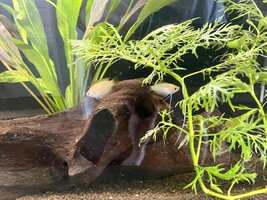 How big are the Pearls? They are either too young to accurately sex or females.

A good way of telling with Gold Honeys is the colour of the trim on the dorsal and analfins. If it is yellow, they are usually male and if it is orange, they are usually female. From the photos they look female but photos are often difficult to tell.
Motherlovebetta
The pearls are about 2.5-3” probably. I hope they are all females! The pearls especially stick together all over the tank. I haven’t seen either of them act up at all. I will look at the fins on the honeys when I get home from work. Thanks!
jinjerJOSH22
Looking at the picture of the Pearls on my PC, the left one looks as though it has some orange underneath the mouth? If this is the case it would be a male. Again it's really hard to tell this of kind of thing in photos.
Closer to 3" is roughly when you can get more of an idea of the gender.
You must log in or register to reply here.