Hello All - really liking all the information on this forum - been very helpful to a noob like me!

Anyone got anything other than very basic info/experience on these fish.

I got four of these from LFS coz I really liked the look of them and was assured they were hardy.

Really like the irridescent stripe along the back and mother of pearl effect, also they seem very active swimmers and feeders

All the searches I have done seem to defer to the Celestial Pearl Danio - which is not the same and this forum (and others) don't have any specific information on them.

I'm sorry, my experience was with zebras and leopards. I'm bumping this thread in case others have some insight for you.

I'm afraid I don't have any experience with these fish either. I did a google search and all I was able to come up with was basic information. Of all the sites I tried this one seemed to have the most complete profile. The aquarium wikI site isn't working right now so I can't be sure what kind of information that site might contain. Hopefully someone here has the first hand knowledge you're looking for.

Thanks to both for the replies.
I guess I should have been abit less hasty on the purchase of these, but then I figured they were Danios and all the fish sites I encountered seemed to suggest hardy - which is what I was looking for in a first fish for my new tank.
Am in mid cycle now and they seem really happy - quite jumpy at feeding time which is pretty cool after only a week in the tank.
Some sort of cat in a week is next I think.

Pearl Danios are a fantastic fish. They typically grow to around 2.25"/2.5" in length. Like many of the other Danios, they are very active swimmers. They have a very wide distribution through many parts of Southeast Asia... India, Malaysia, Myanmar, Thailand and Sumatra.

First described by Blyth in 1860, they have been a mainstay in the USA aquarium hobby for almost a century. They are very hardy and will adapt to a wide variety of aquarium conditions.

I keep mine in unheated tanks where the temperature runs around 68F-72F. The water is on the softside with a neutral pH of 6.8/7.2

Best of luck with your new fish! You made a great selection for starting your new tank.

That's good to hear - thank you

Thanks Martin, it's a work in progress. ;D

I've just started off my heavily planted Rio 240 with six of these guys, never realised how colourful they were until buying them two days ago and then wathcing them colour up in the tank at home!

One of them seems more skittish than the other five and tends to stay in the "tall forest" area of the tank, while the other five do sometimes school together for a while in thje open...

Quite right! They are one of the fish that typically don't show to well in the dealers tank, but in the right environment, they are real beauties.

OK so my photo skills are not the best - been trying for ages to capture the Pearl Danio's two irridescent stripes - one all along the backbone from head to tail and the other from the tail halfway alobng either side of the body.
This is the best I have managed so far: 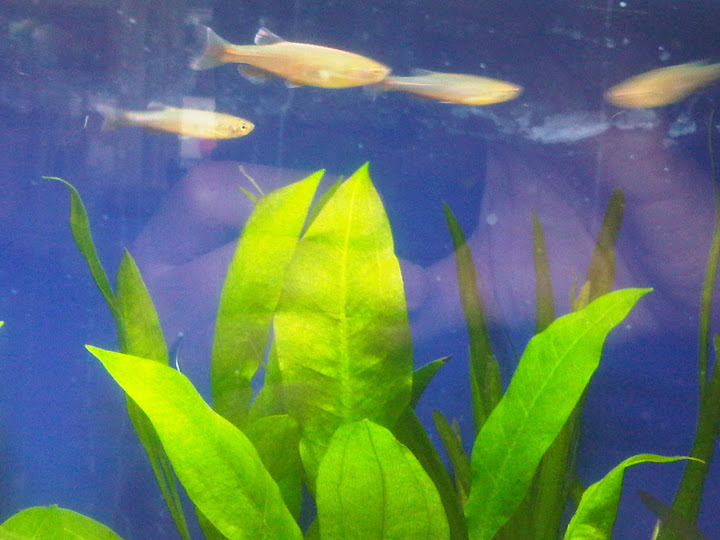 This one had no sign of the single growth on the lower lip, but had a dodgy looking red/purple patch in the upper chest area, perhaps a mass internal bleeding? The fish had dies in a slightly unusual posture, looking as if it was bending its head away from the chest.

I'm wondering if all the mediaction had paid its toll, as the group had gone through Protozin; Pimafix; Melafix and Myxazin over the course of several weeks, trying to sort out the single pimple on two of what was a group of six.

Edit: I might well regreat it, but when I found the dead Pearl I was getting ready and still did put the remaining five adults back into the Rio 240, which cheered them up no end (really lovely colours again) and also helped bring the new Yellowtail Congo Tetra out "of their shells" a bit more. Its great to now begin to see an active tank, the Pearls are doing a great "dither fish" job
You must log in or register to reply here.
Share:
Facebook Twitter Reddit Pinterest WhatsApp Email Link
Toggle Sidebar