Can someone ID this parrot chick? My aunt found It abandoned in a luggage store in her house. Since there are no authorities to take care of abandoned pets, she decided to keep it. I'd like to ID it for her so she can give it proper care. I posted it here since I don't know any similar forums for bird ID. would be very grateful if someone can help. We live in Dhaka, Bangladesh, if that's necessary information. 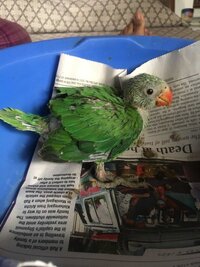 Alexandrine parrots are easily identified by their massive upper red beaks, maxilla, and maroon patches found on their wings. In comparison, the Indian Ringneck has a smaller beak and lacks the maroon colored patches seen on the Alexandrine parrot. I'm just going off of color here (and color can be varied for some species...)

If it's not a parrot, my next guess would be some kind of conure - but I would think parrot at the size of her feet. Here in US, if it was bred by a breeder they typically have bands around their left leg. Could it have been wild? (In the wild, parent birds will abandon the chicks they deem 'weak' and choose to feed the ones they deem 'strong').

I have parakeets, They have totally different dietary needs than parrots do, but I would assume feeding and rearing is similar and it's a tough task without the parent bird for someone newly experienced with them.

Have you tried to feed it? It may be too young yet to accept solid food. Birds typically learn from their father parent what foods they can eat and what things they cannot. The mother bird will feed her chick until she refuses food. At that point the chick starts exploring and looking for options that he learns from dad.

Parrots are typically weaned at the 10-25 week mark. Given this chicks size, I would think that it's not quite that old yet, My guess would be maybe around the 6-8 week mark. There ARE pre-made parrot chick feeding formulas that you'll mix and heat and then feed to the chick. But this is an extremely careful and involved process in itself.

Parrot chicks should be eating at least once every 3-4 hours. The area right below their neck will fill with food until it is full, and within the next few hours, the food will be consumed and the crop needs filled again. It's important to get temperature and amount just right as you're feeding the chicks. It's best to use something like a syringe, but you'll also need to be careful where you're putting the food in the chick's mouth, they CAN aspirate their food, and when this happens there's no saving them.

The Science of Handfeeding and Weaning the Baby Parrot

^^this is a resource that talks about hand rearing parrot chicks.

^^this is a veterinary guide on hand feeding baby birds.

The Diet / Nutritional Needs of Ringneck Parrots | Beauty of Birds

The Mods might not appreciate this, I think this might break some rules in terms of posting links that are not fishlore links, but I'm not sure the OP will find many others on this particular forum talking about birds, and I do have *some* experiences with em...Just trying to be helpful here.

To the OP, I hope you are very successful in caring for this parrot. Give it lots of attention, parrots are VERY smart animals and when taught (they learn through mimicry) some of them can actually start to 'think' for themselves. theyre also extremely social animals as well. If he's afraid and tries to bite or screetches when you touch/pick him up, than he is not used to human contact and pushing the issue will only be seen as a threat. Hopefully he's too young yet to understand what's going on OR he was hand reared already in the past - so he's used to being man-handled.

Last recommendation would be, if you can find someone around where you are who breeds parrots or sells parrots, contact them and send them a picture asking to identify it? Definitely also post on some parrot forums as well as this one. .