I had a 1.5” male convict in my 20 gallon with a 1.5” EBJD who bullied him often so I decided to get another tank for the convict. I don’t have many resources on hand so the best I could do was get a 10 gallon tank and decided to put a 1.5” female convict in it with him at the same time. On the first day, as soon as I released them both into the tank he followed her and was basically all up on her for a good hour or two without biting. However, after about 2-3 hours the biting began. He would chase her and bite her and the following was nonstop. Today was the 2nd day and when I woke up this morning I saw the two close to each other idle on one side of the tank for a good hour until the biting began again. I noticed that the male constantly follows the female. If she swims slowly and calmly then he follows her in the same manner. Whenever she makes a quick movement he darts at her and bites her. I added two red eye tetras to the tank to give the overcrowding effect to hopefully lessen his aggression but that was a total fail. He ignores the red eye tetra’s and still goes after the female! The female’s anal and two front fins have been damaged, not severely but damaged nonetheless. They’re the same size and she tried to fight back once but since then she hasn’t and she just tries to run and evade his attacks. He doesn’t follow her as much anymore but he will attack her sometimes when he sees her. I was hoping they would mate but I’m not confident from how the first 2 days went. I heard that convicts are very easy to breed so I’m very surprised why mines are having problems. I unfortunately can’t get a bigger tank right now and the dither fish didn’t work so I don’t know what to do. I’ve attached a picture of the 10 gallon tank and some pictures of the male and female 1.5” convicts. Any advice would help as I’m still an amateur, thanks! 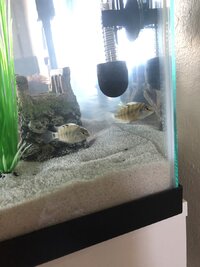 Is it possible my “male” is actually a female? I got them both from Petco, the worker said it’s a male because he doesn’t have an orange belly. I noticed the “male” has beige dots on his side but it’s definitely not as bright and visible as the females orange stripes.

I know. I wanted to buy a bigger tank but my father won’t allow me to since it’s my first time. He used to keep all kinds of cichlids and he told me a juvenile Green Terror, Jack Dempsey, Convict and Pleco could live in a 20 gallon for a couple months until they would need a bigger tank. He said if I’m still interested and passionate about the fish when they get to that point then he’ll let me buy a bigger tank. So for now a 20 gallon and 10 gallon will have to do.
Also I read on this website that for breeding “at least a 10 gallon tank” is suitable which is why I even considered the female.
The female and male were under the bridge and jousting for a bit. For 15-20 minutes they were both under the bridge flaring and circling each other. At times they even locked lips. This continued under the bridge as well as on top of the bridge. The flaring continued and they kept coming back to the bridge. The dueling somehow got to a corner of the tank behind the empty flower pot. When I came back they were dueling at the bridge again. This went on for about 30 minutes until it seems like the male won and then chased the female off where she hid behind the filter. Later I noticed she went back down to the bridge where they engaged in another brawl for about 10 minutes in the same manner as before. Once again the male won and chased the female off and she’s now staying near the top of the surface while the male stays under the bridge. Even though she lost I’m really happy that she’s not giving up without a fight. As timid and shy as she is she held her own for a good amount of time against this aggressive male! Good for her, I really hope she survives.
Upvote 0
You must log in or register to reply here.

A
Tips on breeding convict cichlids?