Our Pleco is sick

So my boyfriend and I got home Sunday after the holiday. Before we left, each pleco got some zucchinI and everyone seemed to be fine. This morning, I turned on the light on our 55 gallon, and Tiny, was on his side. Which is not too odd for him, we often find him in odd positions. I still showed my boyfriend, and when he went to touch him, Tiny just laid there He was breathing, but his eyes were sunken in! We saw he hadn't touched his zucchini, which isn't like him. My boyfriend as since gotten him upright and put some algae waffers in front of him as well as added something to the water for Ick. But I don't know what else we can do He is such a beautiful pleco My boyfriend got him from a friend many years ago, so we aren't sure how old he is. Anyone have any advice?

Sorry to hear about Tiny.

Pictures would help a lot.

If he is as old as you say, it could just be old age catching up with him. What kind of Pleco is he and how big?
OP
M

I'll try and get some pictures of him. I'm guessing he is at least 6+ inches and I think he is a common pleco. When I get home I'll get some pics
OP
M

Here are a few pictures. My boyfriend has been able to get him to eat some algae wafers by holding him over them. He is also able to hold Tiny in his hand and move him to the top of the tank to try and help him get some air. But when he puts him back on the bottom of the tank, he ends up on his right side, unable to correct himself His tail also curls to the right. I asked my boyfriend to try and estimate his age, and he figures maybe somewhere between 10-12.

I'm hoping someone has some tips cause it is so sad and heart wrenching to see Tiny like this, he is such a huge part of the family. 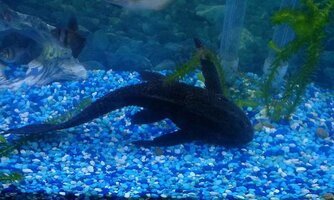 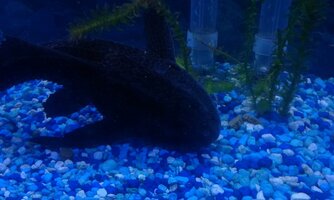 We lost him about an hour ago I was trying to feed him some peas and he wasn't breathing anymore My boyfriend measured him and he was 14"...so maybe older then we thought. He will be missed

So sorry for your loss.

14 inches? Wow! Common Plecos need a home of at least 125g to be happy and live full life. So I would say that the size tank he was kept in may have been a contributing factor in his mysterious death. But I could be wrong.

Commons are thought to have a max life span of 20-30 years in captivity. A 14 inch common would be about 15-18 years old, if it was not stunted. So the age doesn't seem to far off.

Fish are like people, sometimes our time is up. Likely isn't your fault. Don't beat yourself up over it. I had a mysterious death not too long ago of one of my Rainbowfish. These things happen and aren't necessarily at fault of the owner.

If you replace him with another pleco, I would recommend one that is smaller in size. Try for one that stays 8 inches or less in a 55 gallon tank.
OP
M

Not sure if he was stunted, my boyfriend got him from a friend who could no longer care for him. That was before I knew him, so maybe 6-7 years ago? The 55 gallon was an upgrade and unfortunately the biggest we could currently afford. But he always seemed happy and always ate his veggies and wafers.