HI everyone! My boyfriend and I have an ever growing collection of tanks and animals. I love taking pics of everything and wanted a place to share them, which is in part why I joined here.

I've got to gather pics together and whatnot, but I wanted to start the thread to encourage me to do so lol.

It all started with one 10gl with two goldfish in it. My one 'feeder' goldie is now about 6 years old, 6 inches long, and one hefty boy. He's currently being housed alone as he's gotten pretty abusive to our lil' pearlscale female and his tank mates when he's in frisky mode - which is almost always with this fish lol.

Early this year, I got a betta. It's been years since I had one, and everything since then has pretty much just kept going. We're now at two 10gls with a male betta in each (plus some friends), one female betta sorority, one 50gl goldie tank (they're soon to be moved to a 60gl and the 50 is going to become our angel/tropical tank), a 2.5gl with a couple red claw crabs, and 2 baby corn snakes. Quite the zoo in here.

Anyway, I will be back to flood this thread with pics eventually, if anyone is interested!

For now, this is our newest tank. We're trying live plants for the first time, and this is the sorority. I am in love with it; it's been about 2-3 weeks since everything was up and running. The plants have grown, which I'm super happy about. A couple leaves on the skinny plants (which were sold to me with no name - anyone know what they are?) have some tears in them and are browning, but I think the cories may have something to do with that lol. 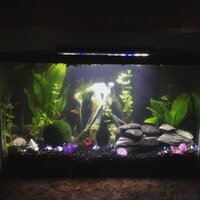 Welcome to Fishlore!
What tanks did you say your goldfish were in? What kind are they?
OP

Hi! We've got a 50gl that has our goldies (plus 2 snails and a pleco); one pearlscale, one black moor, one telescope, one calico ryukin, and one lemonhead ranchu baby. <3 They're all under a year old, minus the moor who's almost 2, so everyone is still pretty small. It's fun watching them grow though and I can't wait for them to be big and chunky lol. 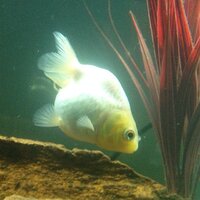 This is Quasimodo, QuasI for short. He's got quite the gimpy spine, but swims totally normally thankfully. He's so so little. I've been waiting for a ranchu, was glad to finally get him a few weeks ago. 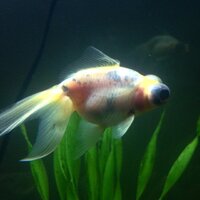 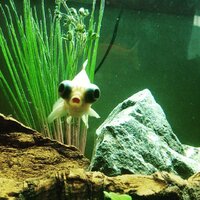 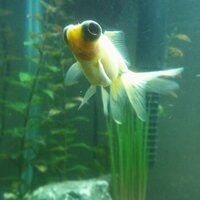 Our telescope, Hubble. Suuuuch a derpy fish. He's really weird looking, he's gotten bigger since we got him and he's gotten some very mild yellow in his head and tail, but otherwise all his markings have pretty much stayed the same... he's white, clear in some spots, weird black layered markings... love him. 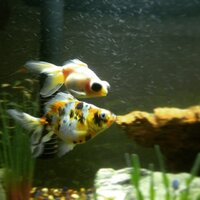 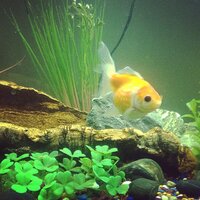 Jellybean, or Bean for short, our sweet lil' pearlscale female. For now, the only known female in the tank. Atlas and Hubble are too young still to tell, though I think I see breeding stars starting on Atlas' cheeks. 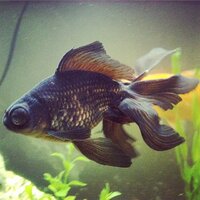 Jake, slowly losing his black. Though he hasn't lost it much more than this... some days he still looks solid black, sometimes the light hits him just right and he's got a nice golden sheen. 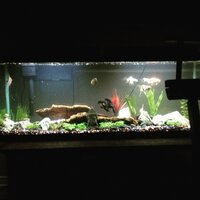 50L is not nearly enough for all the fish you have. The goldfish will grow upwards of 8+ inches and will need at bare minimum of 29 gallons, or better yet 40 gallons. The pleco, depending on what type it is, can grow anywhere from 6 to 24 inches. The 6 inch variety will also need a 29 gallon tank, the 24 inch common pleco needs a 125 gallon tank.
OP

It is NOT 50L, if you'd read correctly you'd see it is 50 GALLONS and that they are soon to be upgraded to a 60 GALLON. I am aware of the requirements for my fish, thanks.

Honestly, did you read and or look, or just post back assuming I'm some ignorant fishkeeper? Does the final photo of a full tank shot really look like a 50liter/13 gallon tank to you? My fish are adequately housed.

I am honestly sorry that all I saw was the "50l", normally people write "50g" or "50G" and not "gl". You may have your fish adequately housed but there are quite a number of people who have overstocked their nano tanks without realizing that they are literally killing their fish this way. Some people even refuse to listen to the advice of others on this forum when told their fish is too big or will outgrow their tank.
OP

My other goldfish has survived 5+ years, so I'm not worried about my ability to keep goldies! <3

I can only imagine the mistakes people make, and refuse to fix. I've seen some scary tanks while browsing tags on instagram. But all my babies are good!

Yes I can see that. I'm a tropical fish person myself Oh by the way, welcome to Fishlore!

Thanks, both of you!

We're planning to do a tropical very soon. The 50 is going to go to our 3 angelfish, so they'll have plenty room to get nice and big. We're going to get some glass cats, gourami, and some sort of schooling fish to go with. Not sure what kind yet though, we're debating.

rebexy said:
It is NOT 50L, if you'd read correctly you'd see it is 50 GALLONS and that they are soon to be upgraded to a 60 GALLON. I am aware of the requirements for my fish, thanks.

Honestly, did you read and or look, or just post back assuming I'm some ignorant fishkeeper? Does the final photo of a full tank shot really look like a 50liter/13 gallon tank to you? My fish are adequately housed.
Click to expand...

Button got hit Welcome to FL. the place where humans are pets and our keepers are everything and anything. Overall, just a real cool place. Lots of good peeps and ninjas about
OP

The "You hit my button" , an expression meaning something irk'd you entitling a solid stance or return.
OP

Ahhh, lol. Well, I know what it's like to be a noob on a forum, but being new to a forum doesn't mean coming in blind or without any previous experience. I wasn't in for a lashing over someone else's mistake.

rebexy said:
Ahhh, lol. Well, I know what it's like to be a noob on a forum, but being new to a forum doesn't mean coming in blind or without any previous experience. I wasn't in for a lashing over someone else's mistake.
Click to expand...

Or we'll send out the beavers.

You're goldfish look great careful putting those angels in there, though. They are impossible to sex as juveniles and if you get a pair in that size they are liable to bully the third to death. I would only recommend 2. Welcome aboard!
OP

They've all been together since they were young and we've had no issues so far, at least. Going to a bigger tank we did intend to get more to try to balance it out, since I have read about maturity aggression. We were thinking of adding 1-2 more... suggestions?

I have heard changing the environment when adding new fish really helps. Rearrange the plants or decor a little and see if that helps.

Well, they'll all be settling in to a new tank together, so that may help. No prior territories or anything. But the 3 we have now are, no pun intended, truly angels. They're very very social and active... they're practically goldfish lol. Our biggest one has got to be around a year by now, and shows no aggression... at what age would that usually start?
Share:
Facebook Twitter Reddit Pinterest WhatsApp Email Link