Otocinclus Fry! Any Tips To Help Them Survive? I Can't Find Much Info.

They're in a planted 10 gallon right now. I got the otos last month and am keeping them in the 10 gallon until a 29 gallon is ready. I've seen maybe 15 fry at a time, hanging on the glass and under leaves, but I have no idea how many there really are. I also think they might have hatched on different days as some are notably bigger than others. I first noticed them three days ago.

Predation probably isn't an issue as their only tank mates are ember tetras, RCS, and two adult otos. There's a sponge on the filter intake.

My primary concern is food. They're so tiny - smaller than a grain of rice - so they can't eat much, right? But they've ignored zucchini, romaine lettuce, seaweed, and algae wafers. The RCS won't let them near the algae wafers even if they tried. The tank and its plants have been running almost two years so it has some aufwuchs but it also has two adult otos and 50+ RCS competing for it.

Water changes are also a bit scary. I changed 1 gallon yesterday but had to stop when I saw them getting stuck above the falling water line. I'm not sure how to handle that while they're so small. Maybe lots of little changes? Parameters are fine but I'd like to keep the water pristine and fresh for them.

I've never had fry before, just shrimplets, so oto fry really caught me by surprise. They're incredibly cute. Today is the first day they've developed colors and shown any pattern like the stripes on the body/tail; they were mostly see-through and colorless before.

I keep telling myself they probably won't survive but I can't help hoping that some will. 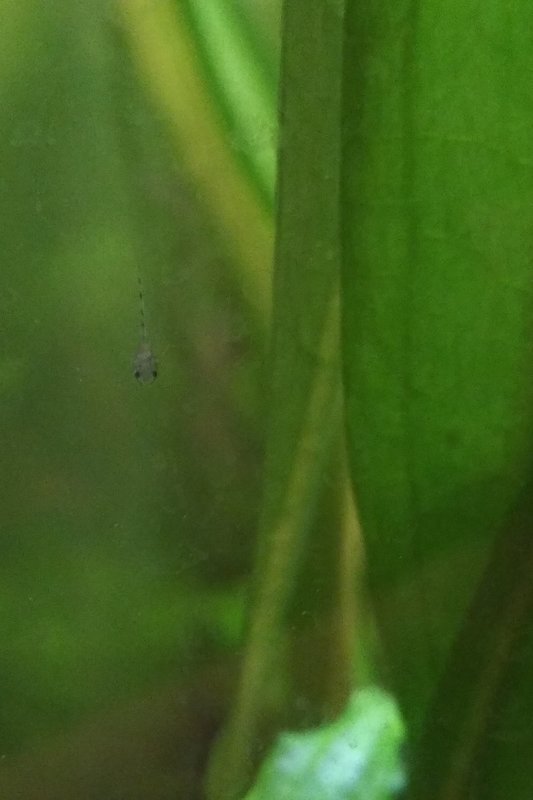 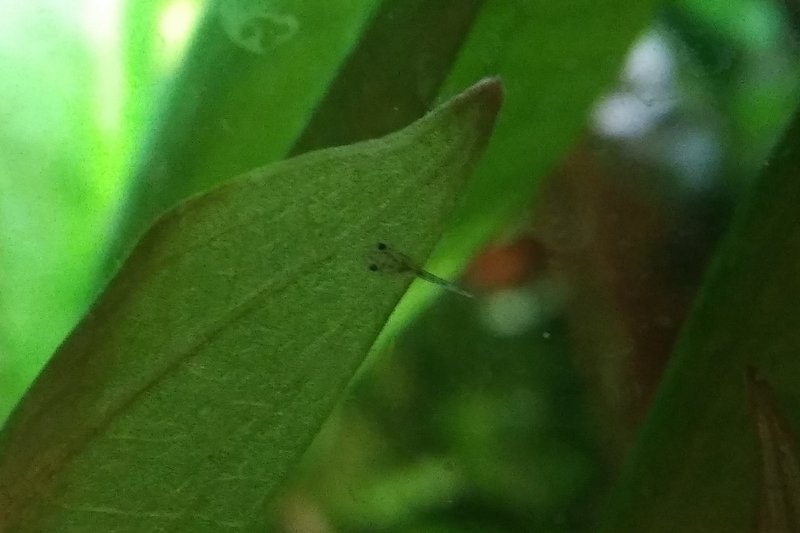 Hi, congrats on the fry.
As long as the tank is established & you have plants then there would be enough food for them to start off with.
Mine soon learned from the adults that zucchinI was good to eat so I’d suggest still offering it to them, even if you don’t actually see them on it they may graze on it at night.
I’d also suggest finely grinding some algae wafers into a fine powder, the shrimp would get a lot of it but wouldn’t be able to hog a whole wafer & there’d still be enough powder for the babies to find.
Maybe not all will survive, nature can be harsh that way but hopefully enough will, from my first Oto spawn 6/7 survived to adulthood & have had their own babies since.
Good luck with them hope they continue to do well, update us with their progress....& pics

You must be doing something right, so my only advice is to keep doing exactly what you've been doing. Congrats!
F

So cool! I love ottos!
OP

They're growing and changing every day. It's so cool to watch and is the most exciting thing that's happened in my tanks.

I haven't seen both adults since the babies hatched, just one at a time. I hope they're both okay...

Thanks, Coradee! I appreciate the tips. Grinding up algae waters is a great idea. I'll keep trying with the veggies too. I'm also glad to know that you had so many survive. I'm really hopeful.

A little oto swimming on the glass. It's so small compared to my fingernail!

This was Day 3 after I noticed them in the tank. I'm not sure how old they are, maybe a week or so? It was the first day I noticed them showing color/pattern on the body/tail.

I saw about fifteen of them today so they've survived longer than I'd hoped. They're harder to locate now because they're venturing more into the tank instead of staying on the walls.

Coradee, did your otos ever die after spawning?

I haven't seen the two together since before I noticed the fry almost a week ago. Perhaps I am seeing them both, just separately, but I fear that's not the case.

I've looked but the tank is full of plants, wood, and shrimp so I usually don't see any remains when fish pass away.

Hi, no I’ve never had any deaths after spawning, hopefully yours are just playing hard to see. They’re so good at hiding I’ve never managed to see exactly how many I have now

Wow, congrats! I didn't know anyone ever got their ottos to breed in the aquarium It would be great if we could stop bringing in wild caught fish!

angelcraze said:
Wow, congrats! I didn't know anyone ever got their ottos to breed in the aquarium It would be great if we could stop bringing in wild caught fish!
Click to expand...

Someone called Coradee did hahaha.
I think it is really great.

It seems more people are starting to have success with them which is great, Oto fry come a very close second to cory fry on the cuteness scale.

Coradee said:
It seems more people are starting to have success with them which is great, Oto fry come a very close second to cory fry on the cuteness scale.
Click to expand...

I want some tooooooooo.

DoubleDutch said:
I want some tooooooooo.
Click to expand...

I hope you get some otto babies too! How many adults do you have?

Coradee and JenC How many do you have?

angelcraze said:
I hope you get some otto babies too! How many adults do you have?

Coradee and JenC How many do you have?
Click to expand...

I can't stop watching them, they're so cute!

I'll try to get more pictures today. They're still tiny but growing every day.
OP

angelcraze said:
I hope you get some otto babies too! How many adults do you have?

Coradee and JenC How many do you have?
Click to expand...

There are only two in the tank with the fry. I just got lucky with one of each gender. They were supposed to be in there temporarily until I retire the 10 gallon and move everyone to a 29 gallon but now I'm not sure what my game plan is.

I can't even QT ottos and keep them alive myself, but I'm excited about your project! I hope it works out for you!!!

I didn't have enough brown algae in my QT tank for them. I think they starved because the tank was full of RCS and MTS, they would cover the wafers and the ottos were too timid. Diatoms are something the babies would eat I think. I also used (used) filter floss to help feed small fry. They feed off the mulm.