I started up a brackish, half strength seawater, one gallon tank about 6 weeks ago. Actually it was a month before that when it got set up but 6 weeks ago is when the first shrimp went in. I started with 8 shrimp from the guy who runs the "Supershrimp" forum and then 2 weeks later got 8 more from a seller on eBay. The tank currently has 16 shrimp, a Horned Nerite snail and 2 pieces of macroalgae that is growing nicely. There is no heater or filter and I only top off the water with distilled when needed. They get fed maybe once a week but they say you really never have to feed them or do water changes and they can live up to 20 years. Today I noticed 2 heavily berried females. I had one a couple weeks ago but she lost the eggs. I'm keeping my fingers crossed that maybe this time I will get some babies. 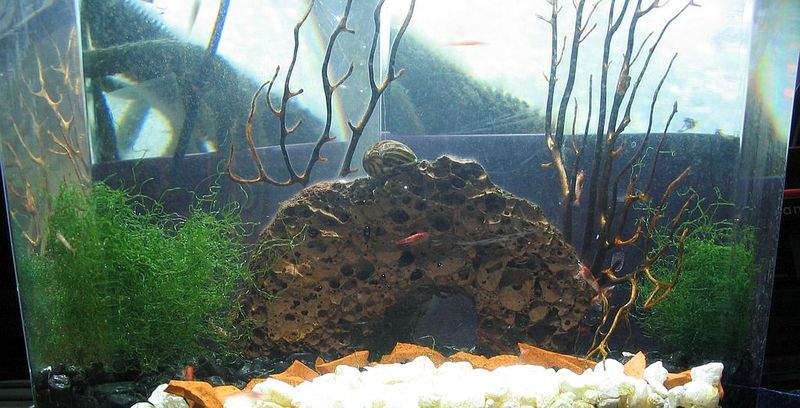 The Zebra Nerite is just an empty shell that I superglued to the lava rock. The live Horned one is a lot smaller.

That's a really interesting tank! How do you not do water changes? Don't you need to remove the accumulated biological wastes and stuff? How does a shrimp live 20 years? So many questions. Is it cycled? Do you test the water? How do you know you are maintaining the correct amount of salinity?

This species of shrimp is native to the volcanic islands of Hawaii. They live in pools that connect with each other under the lava and also connect to the sea. The water they live in is about half the salinity of sea water. The best thing to do is use distilled water and add an ocean salt product like Instant Ocean at half the volume given on the package. They have been documented to live over 15 years in captivity. They are often sold in sealed ecospheres and can live like that for 10 years with no feeding or water changing.

You set up your tank with no filter or heater. Just a light that stays on for 12 hours a day. When you start to see algae growth then you can add the shrimp. They feed on the algae and biofilm and often require no supplemental feeding at all. Water changes are not necessary, especially if there is some macro algae growing. The water in my tank tests out with no ammonia, no nitrites, and amazingly, no nitrates either. If you just top off the evaporation with distilled water, the salinity levels are maintained. The salinity is not crucial however. The shrimp can live in anything from fresh water to full strength seawater. Brackish is best though. They are pretty much set and forget requiring no maintenance other then what you choose to do. You can do water changes but it's usually not needed. Keeping a few snails with them is good too. Either Nerites or Maylasian Trumpets are good although the trumpets will reproduce.

They are small shrimp and rarely exceed a half inch in length. They can be kept in containers as small as 1/2 gallon. Many people keep them in Mason jars.

I love my little Opies too! I have 20 in a 2.5 gallon with lava rock, macroalgae and 4 trumpet snails. Incredibly, after having these guys for a year, no one has reproduced. Neither shrimp nor snail.

Just a very slight correction; they come from the island of Hawai'i, a.k.a. the "Big Island". Not really found elsewhere (including any other island) to my knowledge, they're typically farmed and distributed from Hawai'i island.

Very cool though. I hope that those females bring those eggs to term! It would be so rewarding.

candiedragon said:
Just a very slight correction; they come from the island of Hawai'i, a.k.a. the "Big Island". Not really found elsewhere (including any other island) to my knowledge, they're typically farmed and distributed from Hawai'i island.

Very cool though. I hope that those females bring those eggs to term! It would be so rewarding.
Click to expand...

The ones I have were tank raised by a guy who has been breeding them for 15 years. I have read that they are native to other islands besides the main one but the ones from different areas will not interbreed. Here is one of the sources I read.

Halocaridina rubra is endemic to the Hawaiian islands, and most commonly found in anchialine pools in fresh lava substrates on Hawaiʻi and Maui Island; it has also been found in limestone karst pools and hypogeal habitats in limestone on older islands, such as Oʻahu. Its habitat is unique and sparsely represented on five of the eight high Hawaiian Islands (Maui, Kahoʻolawe, Oʻahu, Molokaʻi and Hawaiʻi)
Click to expand...

I need these shrimp ASAP . I still haven't set up my 8.5 with anything and this looks like something I can handle!!!

I got my first batch and the macro algae from the site called petshrimp.com . They have complete instructions on how to set things up. You could have hundreds of them in an 8.5 tank.

Dch48 said:
I got my first batch and the macro algae from the site called petshrimp.com . They have complete instructions on how to set things up. You could have hundreds of them in an 8.5 tank.
Click to expand...

Oh believe me I'm already planning this. But I think I'm going to use a ten gallon I have that the filter died on. Then I don't have to buy another filter and cycle it all over again. Just grow algae, add water and add shrimp. My kind of tank!

Dch48 said:
The ones I have were tank raised by a guy who has been breeding them for 15 years. I have read that they are native to other islands besides the main one but the ones from different areas will not interbreed. Here is one of the sources I read.
Click to expand...

I just wanna preface this by clarifying that I had meant to say that wild collections were initially and largely sourced from Big Island. It was 2am and not quite all there lol.

I am a little bit skeptical of findings of the same species on different islands. They're very tiny so how would they be spread across the islands and how could they have adapted to very similar environments on each island without having even a slight difference in evolution to allow them to adapt to that environment? We have/had endemic birds of the same family spread across different islands but had evolved distinctively from each other. So it doesnt make sense to me that 'opae 'ula has populations across different islands without evolving distinctively from each other. There is just no way they so happen upon the same exact food source, same exact environment, and same lack of predators on a few different islands. Unless they were taken from Big Island and then introduced by human intervention... but in the case of Kaho'olawe that wouldnt make sense because that island is still uninhabitable to this day due to military nuclear bomb testing a long time ago.

Nothing factual there though... just my pure speculation.

Yeah, I think the wild ones are all collected from the big island. Again from what I have read, the strains from different islands, or even sometimes from different areas of the same island, do not interbreed. So there are probably genetic differences. As far as getting from one island to another, that could have happened in a few different ways. They hatch in a larval form and can survive in the sea. So they could have just drifted on the currents. Many of the lava pools have subterranean connections with the ocean. Or, the eggs could have been dropped in bird droppings. The food source does not have to be exactly the same, they will feed on any organic material. Also, the way it was described, the environments are not exactly the same on the different islands. In most cases, they live in the anchialine lava pools but they have also been found in limestone caves on the other islands. Also most of them are solid red but in some pools, there are ones with vertical stripes. The ones I have range from red to red striped, to pinkish, and a few are even pure white. I attribute this to be from interbreeding at the place I got them from. The guy claims he has been breeding them for 15 years without introducing any more wild caught specimens. They also change colors throughout the day, getting darker and lighter for reasons unknown to me. Sometimes they all look pale or brownish and then a while later, at least half are bright red. There are a couple that stay white all the time. I got half from the original source and the other half from a different seller. The ones from the second seller are more red and a couple have stripes. I may have 2 different strains. The original breeder is developing an orange variety and having success.

In many cases, new ponds around the world have formed or been created and in a relatively short period of time, there are fish in them that were not introduced by man. The eggs have been deposited by birds. So who knows how the shrimp got to each island? They just have. It's like coconuts will float for hundreds of miles or more before washing up and taking root in places they were never seen before.

Reading the history of Kaho'olawe, there was never any nuclear testing done there. It was a bombing range and massive charges of TNT were detonated there, but no nukes. The island was ceded back to the Hawaiian gov't and has been being restored since 1994. There has never been much of a population there because of a lack of fresh water.

These are quite amazing creatures no heater no filter little or no food, I did think about them a while ago and forgot I had this article
Set up a Supershrimp tank! Step by step instructions

Today I have my first "floater". That's what they call the hatched young that start out in a larval form that floats around for about 10 days before morphing into a regular shrimp. The morphed babies are extremely small which is not surprising given that the adults rarely exceed 6/10's of an inch.

Well now there are 5 floaters.

Dch48 said:
Well now there are 5 floaters.
Click to expand...

I need to set up a tank with some of these guys!

It takes 7-10 days for the floaters to become actual shrimp. I'm at 5 days now.

Actually with more research it can take 24-28 days for the floaters to become shrimp. I'm now at 17.

Dch48 said:
Actually with more research it can take 24-28 days for the floaters to become shrimp. I'm now at 17.
Click to expand...

That’s good to know because I got my first babies ever about a week ago.

It's somewhat dependent on temperature---they mature a little faster at higher temps--I'm sitting at 69-70 F. I think you can go as high as 77. The adult little guys are pretty hardy. Salinity is not critical and neither is temperature although they say you should be at 1.010 salinity or half strength seawater at least for the babies to make it. The larvae seem to need the higher salt content. In the wild, the larvae are almost never seen. They go down into the subterranean parts of the cave pools where the salinity is higher.

Just an update. I haven't lost a single one and I have 3 new ones from the batch of 6 "floaters". Now another female is carrying about a dozen eggs.

I was looking on the Supershrimp forum and there is a guy who has had the same 2 shrimp in a tiny ball for, get this, 27 YEARS ! That is truly amazing.