Member
So I was just at my lfs and saw something sitting in a tank that I hadn't seen in a while, BosemanI Rainbows. This was genuinely the second time I've seen any there in a year, and these ones look great
So now I have..uh...three currently acclimating to their qt tank, I'll get some pics once I set them loose
P.S. My original reason for going was to get more fish food, and maybe some glass cats, or marbled hatchetfish, so naturally I pick the fish I wasn't looking for and is twice as expensive

Member
I don't blame you! Gorgeous fish, and cheaper than walking out with another tank lol

Member
So true, they look amazing, can't wait see how much better they look after coloring up too. (I'm holding off on another tank until the next dollar a gallon sale lol)
I'll get some pics up for you in about 20 minutes

Member
I just picked up 2 today as well. It looks like the male is already “inviting” the young lady to dance. 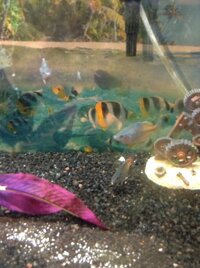 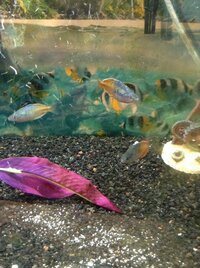 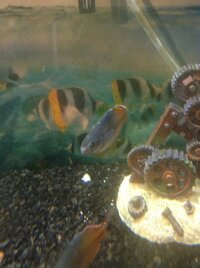 I'm a bit worried about the white speck and the line down the dorsal fin in this last pic, the end of the fin looks to be a little slouched too

Member
I’m absolutely giddy over mine. Let’s hope we both have healthy ones. My female looks to have suffered an injury either when being netted or when I transferred her to the tank. I’ve added extra stress coat and the worthless Melafix just to be on the safe side. 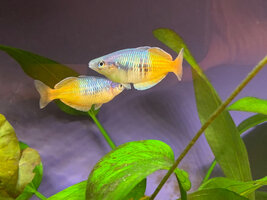 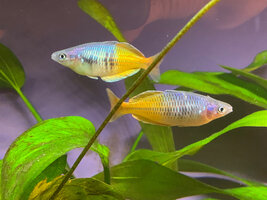 Member
I have no idea who's what

Member
Alex Pasquale I assume you're good with rainbows if you breed them, are mine able to be sexed yet? Anything specific I should be watching out for with these guys

nikm128 said:
Alex Pasquale I assume you're good with rainbows if you breed them, are mine able to be sexed yet? Anything specific I should be watching out for with these guys
Click to expand...

I’d be curious about this too. I thought I had a male and female because I was looking at the first dorsal fin. From what I see online now, the female is supposed to be much duller in color, almost silver. And I notice mine may actually be sparring, not spawning. Oh well, interesting to watch, none the less.

Member
Just lost one it was swimming fine and ate less than an hour ago. Just found it on the filter intake

nikm128 said:
Just lost one it was swimming fine and ate less than an hour ago. Just found it on the filter intake
Click to expand...


any cause of death ideas?
so sad to lose a fish you're so excited about

Member
Not a clue, I even ghost fed the tank to keep the cycle while I decided what to put in it. Can't hurt to check for ammonia I guess. One minute

Member
Angelmom do you have any ideas as someone who keeps these?

Member
I've had mine for almost a year now and they seem to be hardy as little tanks. I keep the temp on both rainbow tanks at 80, pH 7.2, water is pretty hard. Quarantined with Ich X and General Cure with no apparent sensitivities to meds. I keep the bosemanis in a 55 with large angels, rams, some corys and a clown pleco, and they definitely run the tank. The males do spar a bit, but I've never seen anything serious. I've seen a fair amount of chatter about rainbows (particularly bosemani) being badly bred since they're currently so much in demand. In that case, they might be more susceptible to disease. They're also jumpers, so if your guy did some damage to his dorsal side through jumping or other activity, it might explain why the white line and patches run almost directly down the dorsal.

Angelmom said:
I've seen a fair amount of chatter about rainbows (particularly bosemani) being badly bred since they're currently so much in demand. In that case, they might be more susceptible to disease.
Click to expand...

I wish I knew that before I got them, I thought they were really uncommon since I've seen them only twice in one year. I knew they were jumpers, probably could've put that together myself if I paid more attention.
Unless I'm mistaken, they like groups right? So now that I only have two, should I try and find some more, or leave the two alone in qt?

Oh yeah, and what makes this situation suck even more, there's one that I actually expect to not last very long since it's eaten maybe once...so unless that changes I'm probably going to only have one soon

Member
Sounds like maybe you got some bad stock to start with, so don't blame yourself. They do want to be in schools, so I'd advise more than two - four or five at least, if you can, although that calls into question whether you should get them from the same place. On feeding, mine will eat anything but love frozen brine shrimp and bloodworms, so maybe you can tempt them with that? 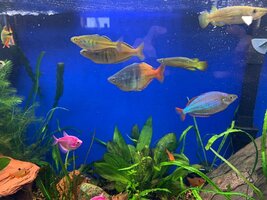 My male is lowest female above and the smaller one is still a juvenile.(from them).

Member
I'll check where else I can get some then, will the two be ok for ~2 weeks?
I'll try brine shrimp again, he shows almost no interest in food though.

Mine male is lowest female above and the smaller one is stil a juvenile.(from them).
Click to expand...

I think the one that died was female, which would make sense if the others were harassing her. I'll get a pic of the other two when I get home

Member
My 2 are around 5 yrs old. They’ve been fine. Just added the dwarf blue rainbows last year. They all do school together. But all my fish tend to school together at times. 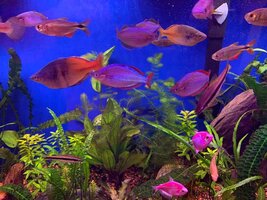 My male is lowest female above and the smaller one is still a juvenile.(from them).
Click to expand...

Thanks. That was my thinking in the store. I was going by first dorsal length. Then I saw where females were very gray without much color.

Member
86 ssinit here are the two I still have 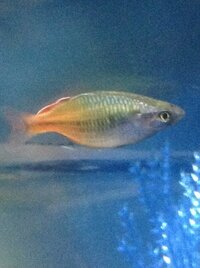 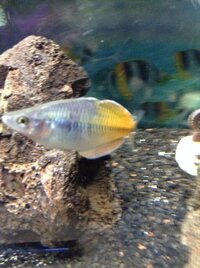 Member
Nice pics. I’m no expert. I say first is a female second a male.

Member
Oh, I was guessing the other way around because of how bright the red was, or that they were both male.
How can you tell them apart? I see no almost no differences besides the vibrancy of the red/orange tail
Share:
Facebook Twitter Reddit Pinterest WhatsApp Email Link
Top Bottom