Surprise! You are now a fish parent ..

This is a story about five fish fry who found their way, completely on their own without any help from me, these five fry found their way into my fish tank. 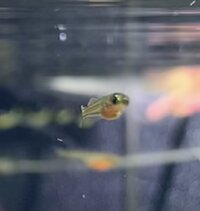 I call it the Biogenesis Tank, ha!

Five fry suddenly appearing in the BT wasn’t completely on accident. It’s a high tech ecosystem tank, with lots of bugs and worms and snails and things. Lots of aquatic plants, floating plants, driftwood, substrate and river rocks to provide homes for all the bugs and worms and snails and things. It’s a 35L tank with maybe 25L of water. It’s had two water changes in three months, one early on during the surface film stage, and another when I freaked out for no reason.

Which is a long way of saying the water chemistry is very stable. And there is plenty of micro-food for fry.

In March, I went to a local fish store. First time in any store for a year. My wife is in a high risk group and we were not taking any chances. So I’m vaccinated, double masked, dodging the other customers, trying to stay distant, picking up some amanos to help with a little algae. Noticed a fern I’d been researching for a shady spot, super cheap, awesome, asked them to bag it up too.

Four days later on the phone for work, the tank is in the home office, I’m focused on the conversation and my eyes are looking at the tank. Slowly my brain starts to register that my eyes are staring at something small and squiggly in the tank. The back of my brain starts to put this together with the fact I have not put any fish in this tank yet. Suddenly I blurt out on the call “I have fish in my fish tank!”

There was a round of congratulations. I took a break to ferment some lettuce.

This is the story of how I became the proud adopted fish father of five tiny fry who found me, species unknown, all seem to be happy. 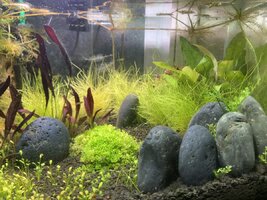 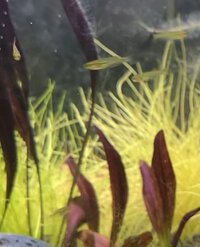 Surprise! You are now a fish parent ..

This is a story about five fish fry who found their way, completely on their own without any help from me, these five fry found their way into my fish tank.

I call it the Biogenesis Tank, ha!

Which is a long way of saying the water chemistry is very stable. And there is plenty of micro-food for fry.
Click to expand...

this is so wholesome. please keep us updated on these little guys and their feats in their new world!

Can’t wait to find out what they turn out to be!

Really beautiful little tank and agree, can't wait to find out what the fry are. Some kind of tetra or rasbora maybe.

That is a very pretty tank. Looking forward to see what they are.

Aw shucks, thanks for the kind words everyone! Here’s a link to the thread in the fish id forum, sounds like it’ll be another month or so before we know for certain.

I lost a shrimp .. literally, I misplaced a shrimp.

A week after this fateful fish store purchase, a few things were happening. I was learning fish parenting, and the tank had decided it needed to be fed a lot more. Maybe the fact there was no more algae escaped notice a little longer than it should have.

Denial came first, maybe it had molted, and was hiding. A week later it was clear the shrimp was gone. I invented a narrative where, out of algae, starving, the smaller female couldn’t make it, her surviving compatriots forced into the unthinkable ..

There were some feelings of guilt. The remaining three shrimp, did they seem a little more aggressive? Did I scar them forever, having to eat the weakest of their own in order to survive?

I still feel guilty, but it feels a little less. At least this was just one shrimp, and I know to check the driftwood for shrimp now. They are not smart enough to let go.

Here is Big Mama Shrimp, Little Man Shrimp, and Littler Man Shrimp. They all seem to have bonded together. 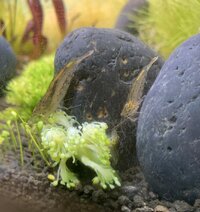 And here is a gratuitous picture of one of the baby fish fry, ha! 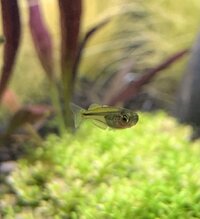 E
30 Gallon Tank Camallanus worms and how I treated them!