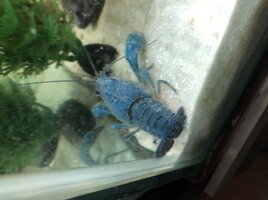 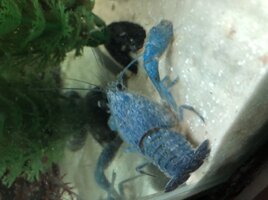 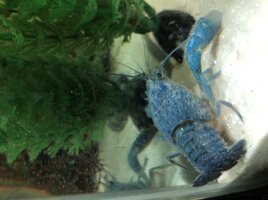 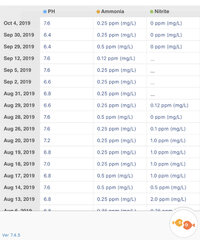 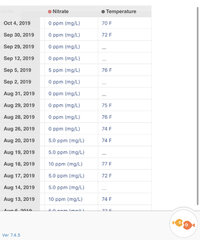 My blue lobster has begun to exhibit significantly different behaviors than I’m used to seeing. This has continued for about two weeks now, and I’m becoming increasingly concerned. Though initially highly active climbing all the decorations and “making rounds” through the tank every few minutes for as long as I’ve had him, he now spends every minute hiding under a large piece of driftwood. When I’ve contorted myself down and around to the back of the tank to lay eyes on him, I’ve noticed that he’s covered in what appears to be a “fuzzy” white growth. Pics of this are attached.

Time since added to tank is 3 months.

If he has ever molted, I’ve seen no trace of the shell or any other evidence of it having happened. It certainly may have and I may have not seen it.

The tank water is “home made” RODI that started as well water and was purified using equipment I have handy for maintaining my reef tank.

“Room mates” include a few varieties of fancy goldfish, one Koi, and one Pleco. Everyone else seems normal.

I’ve done some reading in an attempt to find a solution myself and have noted the importance of Iodine and Calcium. Unfortunately, I do not have these values to share. I have not dosed either of these at any point.

Any advice or suggestions would be most welcome! I hate seeing the poor guy like this. He seems quite unhappy

sorry to say, but not issuing your crayfish, your tank is already a bomb ready to go off. No offense.

KoI need 500 gallons for each, can grow to 3 feet long and should only be in ponds. Plecos are tropical and need warm water, unlike goldies so their temp requirements don't match.
OP
A

The KoI is also only a few months old and is still small. He’s hanging around in this tank for now but will ultimately join the outdoor fish pond.

I’m surprised to see the comments about the Pleco. While I know they can grow quite large, I’ve always noted decent overlap in required parameters with the other fish. I’ll look into that a bit further. Thanks for sharing this observation.
OP
A

came home to find this:

Croeso welcome to fishlore
The first photo says to me hes ready to moult
You say you are using rodI what are you reminerilsing to also need your gh/kh tds
You don't say what you came home to find.
How do you account for the ph swings
Let's start there
Share:
Facebook Twitter Reddit Pinterest WhatsApp Email Link