Observations of wild caught Palaemon pugio in my tank

I captured a few P. pugio from a mass of algae in an inland freshwater canal, alongside mosquitofish, blue-spotted sunfish and grass pickerel. While I released the fish, I kept about 10 of the shrimp and brought them back to a mature 15 gallon planted tank without any intentional added fauna (a few snails and seed shrimp were present), unheated, with rather had water and a ph of around 7. The tank is rather dirty with algae and mulme, and has a HIRO aquatics spotlight. The shrimp are doing well after a week, and are feeding on algae and detritus in the tank. They are slower moving than similarly sized amino shrimps and longer legged. They feed mostly by sifting through the top layer of substrate (mostly silt and detritus at this point) with their long forelegs, although, at one point while I was cleaning the tank a bit, about 5 of the shrimp jumped up on my arm and began to feed on what I can assume was dead skin, much like saltwater cleaner shrimp.
In appearance, the shrimp are truly ghostly, and clearer than an amino shrimp especially when they have been feeding on detritus rather than algae (as algae highlights their digestive tract in green while detritus does so in brown). The only markings present are a few thin, dark brown bands along the abdomen of larger individuals that in some cases are outlined in tan. The most striking visual feature of the species is the humped back, which gives them the species its common names of the "Bowie knife shrimp" or "dagger blade shrimp". Other common names include the freshwater grass shrimp, glass shrimp, and simply grass shrimp. Local fishermen often use this species as bait for bass and large sunfish.
The shrimp are not shy in a species only-tank and their slow, methodical movements make them relaxing to watch. Their long legs do make them a bit spider-y looking and they may not be the best species for arachnophobes or those living with them.

I hope to continue writing about this species in the future. 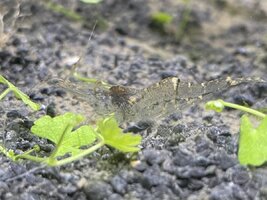 Should I feed my DIY Powdered Shrimp Food

Apr 28, 2020
richiep
Personal Observations On Almond Leaves And Their Effect On My Betta