Not Sure If Part Of Gsp

Member
I bought this frag of gsp from my lfs but it had 3 of these things that I'm not sure if their part of the gap or something else. 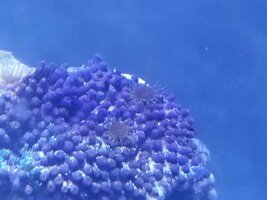 Member
Majanos or Aiptasia... either way, a pest that you don't want mixing with your coralops:, or having a population explosion inside your tank. I've battled aiptasia myself and it was no fun, nor cheap in the end.

coralbandit These look to have a wider, flatter disc than the aiptasia I had. Is this a good way to identify them as majanos?

Member
Yea Majanos are more 'elegant' then aptasia.
Aptasia usually has no visible disk since its stingers are most prominent. Once they get large enough the disk is notable.
Majanos look more like normal little nems even with color sometimes ,but they are a pest to corals.

coralbandit said:
Yea Mojanos are more 'elegant' then aptasia.
Aptasia usually has no visible disk since its stingers are most prominent. Once they get large enough the disk is notable.
Mojanos look more like normal little nems even with color sometimes ,but they are a pest to corals.
Click to expand...

Thank you. That's exactly what I experienced with aiptasia, no visible disc really until I found one that had escaped me long enough to grow. Can you tell us what a good solution for majanos might be? I finally got rid of aiptasia with berghia nudibranchs, but I'm unsure if they'd eat majanos, particularly large ones. I had terrible luck with using injections, (AiptasiaX), against aiptasia, which in the end only made things a lot worse. So, I am reluctant to advise injections when dealing with pest nems.

Jay Chen - I would highly advise that you put some research into getting rid of the pests. It will highly irritate your coral. GSP is no weakling, but if it's constantly dealing with stings from the majanos, well, it may eventually lose that fight. Not saying that will happen, only that it could, and if I were in your shoes I would deal with this problem as quickly as possible.

Member
Most use calcium hydroxide or aptasia X and its 'proprietary ingredients'.
Berghia don't eat majanos from most articles .
Here is an easy read on Majanos ;