Not a Habrosus, then What?

Mcasella
Member
Picked up this little fellow among some habrosus cories, its head shape and pattern are wrong for a habrosus though it seemed at home with them (it is currently with my habrosus cories to give it the most comfort of familiar looking cories). It almost has a metallic look to the surface of it scales but isn't a paleatus from what I can tell.
Just trying to figure out what it is, so I can hopefully hunt down some buddies for it.
My finger nail in the picture is about 1/2" full length to give you an idea of size on this one. 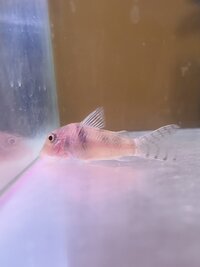 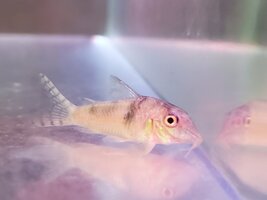 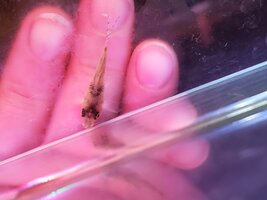 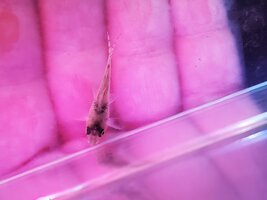 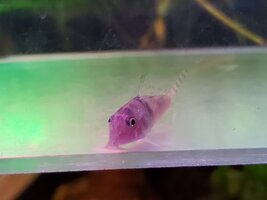 Zach72202
Member
I am going to guess its apart of the ln8sc4 grouping of corys due to the long nose. It does not fall in line with the ln5's, maybe ln9's, but if you could get a picture of him when he isn't washed out in color we could do a little better. That breeder box probably isn't doing us any good lol. Also the fact that its a juvie doesn't really help.

Not to sound negative or rude, but its really hard to tell currently. I use planet catfish to reference a lot of cory's, or aquarium glaser, but look through that under callichthyidae. Maybe you will be able to find something
DoubleDutch
Member
Wow great and rare find.
Doubting it is a known species but going to check !
Could it be a juvenile C.cortesi ?
Looking at the shoveler shaped snout.
Or a juvenile C.septentrionalis.

Planet catfish mentions them being caught along C.habrosus
Mcasella
Member

DoubleDutch said:
Wow great and rare find.
Doubting it is a known species but going to check !
Could it be a juvenile C.cortesi ?
Looking at the shoveler shaped snout.
Or a juvenile C.septentrionalis.

Planet catfish mentions them being caught along C.habrosus
Click to expand...

I haven't seen it yet this morning, so hopefully I can get a better shot. The C.septentrionalis looks physically closer to the shots of it last night after I got it home. I did look through planetcatfish last night but wasn't 100% on any guesses.
Most of the ones I looked at that look similar had different catch locations to C.habrosus. And since this one is a bycatch location would be important factor.
I'm hoping it will get curious/hungry so I don't have to dig around the tank to scare it out to get new shots. Because it is a jungle and has so much surface covering plants it is "gloomy" and dim (which the orange lasers and habrosus enjoy).

Also added melini cories to my collection (have bandit and dirty bandit cories as well as a couple axelrodi, not together on the melini and loxo). Those look so similar at first glance whew.
Got some low quality pictures as it finally came out (darted back between the sponge filter and the anubias rock where I can't see it after I got these). Breathing okay and otherwise looks healthy. Nice shiny green iridescence to the body and more pattern showing. It definitely seems more comfortable in this tank than as the store (where it was almost the same color as the first pictures in the OP). Long snoot, not very dark in the dorsal - looks like a funky paleatus if you aren't really looking. Seems to like the orange lasers as my habrosus are smol (about half its size). 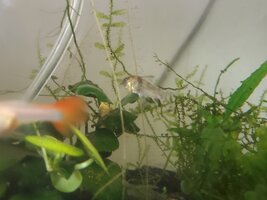 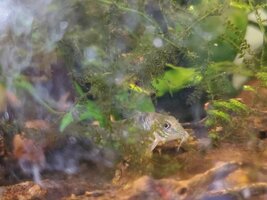 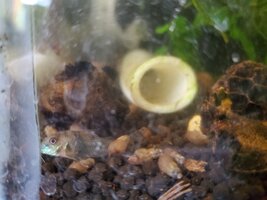