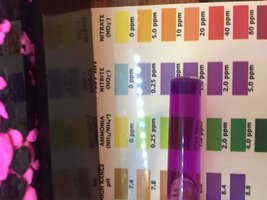 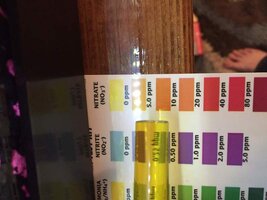 After this morning's PWC, about two hours after, I tested the Ammonia, NO2, NO3.
Ammonia was 0ppm, NO3 was (I think) just above 0ppm, the color was a closer to the 0ppm than the higher reading.
The NO2 came back very dark (5.0ppm).

Is it possible that this was a false positive reading? The fish seem totally fine, swimming around actively and not acting abnormal in any way.

I use TopFin brand water conditioner (5 ml to 5g) to pre-treat my water (roughly 25 minutes prior) before adding it to the tank.
I also use MarineLand EasyCare, 2.5ml in each of my 5 gallon buckets.

I tried searching around on Google and couldn't find anything for either of those two treatments relating to nitrite.
Figured I'd post this here and see if anyone could provide any insight. It just seems impossible that the nitrite could be that high without the fish suffering significantly and showing signs of it, especially after all those water changes.

Do you know about the nitrogen cycle? Sounds like your tank isn't cycled.

Maybe try testing again after shaking all the bottles. If it's still high, I'd do another water change to bring the nitrites back down.

It could of possibly been that you didn't shake the testing bottles vigorously enough.

Have you tested your water source?
OP
T

I tested it again, twice, and made sure to vigorously shake the bottle, and followed the API test kit instructions to the letter.
It came back the same. It's too late here (baby sleeping) to do another water change, it'll have to be first thing in the morning.

I also re-tested the nitrate, and it came back a little darker, let's say 5.0ppm.

Dose the tank with Prime and do a 75% water change in the morning.

To add to this, test the tank again at night, early enough for another water change. You should be doing daily water changes till the tank is close to balance.
OP
T

I changed 15 gallon this morning. I'm limited to doing 15 gallon at a time, as I use buckets to add/remove water.
Couldn't dose with prime (I don't have any), but I'll pick some up at my LFS later tonight.

I tested the tap water (0ppm Am, NO2, and NO3) and also tested it after treating it with the Top Fin water conditioner to eliminate any possibility of a false-positive. 25m after treating the water and testing it, it came back as 0ppm for all three.

Now, I noticed something when I was adding the last of the water in to the tank; There was a tiny little white worm, perhaps 1/8 of an inch in length, very thin.
I added live plants to the tank about 3 nights ago, wondering if I got some sort of hitchhiker with the plants.

I'm thinking it was a detritus worm, which should be harmless.

I'm paranoid, though, as when I first noticed that the nitrite level spiked (fish were floating at the surface, and my usually playful mollie was hanging out at the bottom relatively listless), I did heavy water changes and have been watching it like a hawk since.

That mollie hasn't recovered. It almost appears like he lost some of his scales/coloring, and he's been hiding in the castle/building, or sitting around the bottom of the tank.
He came out earlier while I was cleaning the tank and was swimming around, but he's been hiding more than he's been out. 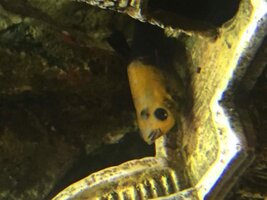 When the 'moonlight' setting for my LED light is turned on, what would normally be yellow coloration appears 'white'. The other mollie is perfectly healthy and swimming around.

I have a cobra endler that was harassing one of the mollies, and I suspect that it's the same mollie that is now sick, I'm thinking the poor water conditions and the stress of that irritating cobra endler caused him to fall ill.

Part of this was likely caused by overfeeding on my part. I've scaled way back, only putting in a little bit at a time and making sure all of it gets eaten.
OP
T 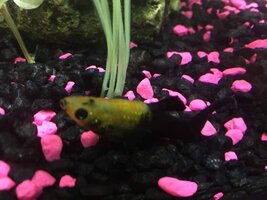 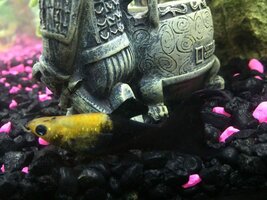 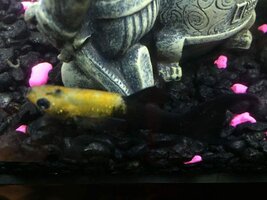 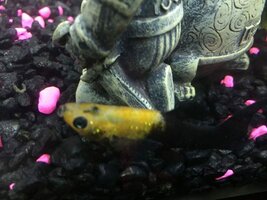 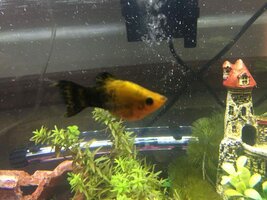 I've been going through the same issues here with my 37gallon. After having used API quickstart to cycle it with in the beginning it didn't work. I've started using seachem stability since then to help with the cycle and also prime to try to help my fish since I do have fish in there already. My nitrites are off the charts but my ammonia is now at 0. Continuous daily water changes here for over two weeks now and daily stability double doses. I'm hoping to its almost over with.. however I have not lost any fish as of yet and everyone seems happy. I'm assuming that has to do with the prime helping out in between water changes. Best of luck to you.
Share:
Facebook Twitter Reddit Pinterest WhatsApp Email Link