I upgraded tanks about 3 months ago from a 15 gal sumped to a 5gal to 35 gallon sumped to 5 gal. Originally I had a bunch of problems and had serious problems growing coral. I always had nitrate issues despite feeding only 5-7 1mm pellets a day which would be eaten quickly. That stocking was 2 clowns under 2 inches and 1 6 line wrasse under 2 inches. The wrasse jumped a little while ago and has been replaced...I'll discuss that. Anyway I always wondered why I could not keep nitrates under control and had such a problem with algae. When I broke that fluval flex tank down i found a couple interesting things.
The biggest problem I noted was that I plumbed the sump into the false back filtration system. So that meant that regardless of how fast the sump was running it was completely dependent on how efficient the main tank pump ran. I thought it was decent until I pulled the sump off during the transition and found an absolutely abysmal tank turnover rate from that main tank pump. I figured this was the root cause of my problems since my oversized skimmer and filter socks rarely saw much waste.
Nitrates sat between 50-100 via an unexpired salifert kit test at the end of every week.
Moving on to the new tank, I have direct plumbed the sump with dual pumps running at least 400gph turnover. Much Much happier with how quickly my filter socks fill up.
onto the main issue.
I still have high nitrates.
This tank is stocked currently with 2 blue devil blennys 2 clowns, and roughly 8 snails. I feed roughly the same rate about 8 1mm pellets per day via auto feeder. I taped the outlet and did a bunch of testing to ensure its more or less this amount. I plan to reduce the 2 blennys to one Im just trying to figure out the less aggressive one at the moment. Still I have trending up nitrates. 50-100 was my last test prior to water change.
25-50 post water change. unexpired salifert nitrate kit.
I upgraded lighting from a basic amazon light to an AI prime HD and nero 5. I have more than enough light and flow now.
My main question here, do I have enough rock?
I think I have covered my bases here. I do weekly 15 gal water changes. I may miss by one or two days but they are almost always on that weekly mark. I haven't added anything to the tank aside from the 2 blennys...but the nitrates were trending up before this.
I do not think i overfeed by any means. I may add some frozen food once a week that's eaten within 5 minutes or picked up by my sock which I normally change shortly after. I run carbon 4 tbsp in a reactor. I also run purigen in the reactor. I am seeing some green algae growth in the upgraded tank along with some brown algae forming on the eggcrate but nothing crazy. I can scrape and clean it all off opposed to before where it was taking over corals and bothering me on the rock. I Think my upgraded clean up crew does that.
I dont know the poundage of my rock. but could that be where the problem is? Is that my overall issue?
I think I've covered the bases here. I consider this tank to be continuously running since I just moved over all my previous rock and equipment. This leads to a setup time of over 1.5 years. 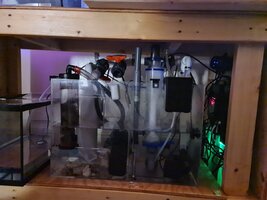 lil update after posting in r2r just to help other folks out. I truly did not realize that live rock does not remove nitrates in the same manner i thought. The consensus is that I need a nitrate removal method on top of what I have. Bio pellets are my ideal go to as I already have manifold to supply water and a reactor to mix the pellets in.
Upvote 0
You must log in or register to reply here.

How does my PVC overflow/Sump set up sound?

How many members for the clean up crew do I need for my reef tank.