I just bought my first snail! (Well, since I was a little kid, anyway.) I got a nerite, what they call a "tiger blood" (not sure if the colorations have different names in different areas).

I think the LFS hadn't had a shipment of nerites in awhile; I had actually planned to get a zebra stripe but there weren't any (well, not any with snails still in them). Most of the tiger bloods weren't that great looking either; I know there are slight variations to the colors, but all that were left were pale ones with messed up patterns. (I wanted a pretty one, okay? XD ) We had actually planned to leave and wait for a new shipment, but decided to go back and look once before we took off. There was this one guy whose pattern looked nice, a nice red-orange color, being active (well, as for as snails go), so we decided to get him. He didn't want to let go from the root bulb he was on, which is hopefully a good thing!

Took him home (about a 45 minute drive), acclimated him, and dropped him in. We're putting him in our 2.5 gallon planted shrimp tank for now; he'll get too big but he'll help with the algae for now (lazy shrimp) and when he gets bigger we'll move him to one of our other tanks. We'd like to have nerites in both, so not sure which yet (but I think a black and yellow snail would nicely contrast our red and blue betta, so we'll probably put a zebra in with him). Apparently corona nerites stay smaller, so I'd like to get one of those for the 2.5 gallon, but I've never seen one so I'd have to order one. (Hint hint, if anyone's selling... )

As soon as we tossed him in, the shrimps were all very curious and came over. Nothing aggressive, just investigating ("hmm, this isn't an algae wafer") then going on their merry ways. Luckily he had already come out of his shell in the bag, so when I put him in the tank he turned over pretty quickly and started...doing whatever snails do XD We think he's pretty awesome. Still need a name though.

If anyone can tell snail genders and knows which he is, let me know! For now he's Mr. Snail. 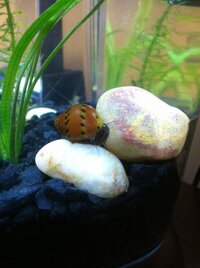 I have one like him. nerites are awesome!! I want more, but only 2 per 10 gallons and its so far of a drive for me to get any. they love company though.

Congrats on your new snail. I am very jealous of you. I don't know what I do wrong.... I can keep most everything alive but snails. Good Luck with it.
OP

Uh oh...hopefully I'll have some luck!

If any resident snail experts would like to give me some advice...

Hello there. Nice looking little feller ya got there!

I started reading it and then...got distracted I guess XD Thanks for the reminder! I know MD breeds snails, but I only know she does mysteries specifically, I'm not sure if she has experience with other snails as well. I'm sure to some degree information is pertinent to more than one species, though.

;D Hardly a expert Donnerjay! But thanks for the compliment .

Very pretty snail!! Nerites are pretty difficult to sex. I was only able to sex mine because I had seen which one was laying eggs and each had a different shell pattern so I could tell them apart. LOL I don't see any algae in that tank! I've kept Zebra Nerites mostly and love them but I'm really looking forward to getting a couple of Red Onions (what you have) in the near future.
OP

My plants are covered in the stuff! Unfortunately he looks bigger once he's in the tank, and I don't know if he'll be able to eat it off the leaves without falling off of them. I'm a little worried they're not getting enough light; the corkscrew val doesn't have much algae and is doing well, but the dwarf sags are pretty well covered and not growing so much. I definitely plan to supplement with algae wafers.

Lol the reason your shrimp aren't doing the job is because they are too full after eating the algae wafer. I mean if a cheeseburger was sitting on the table in front of you and you were starving, would you go through the work of grilling another burger and making the sandwhich just so you could eat that one and leave the first one sitting there? Bad example but it works lol. Also your shrimp might be a type that don't normally eat algae. What type do you have?
OP

I have ghost shrimp, 6 of them in a 2.5 gallon. Too many, I know; once they get bigger I'll relocate a few. I wanted RCS initially but they cost an arm and a leg around here. I need to find someone selling them locally so that I can pick them up and not pay shipping

I've only been putting in wafer bits 1-2 times per week, and I remove the pieces as soon as they're abandoned so as to not foul up the water. I want them to eat the algae, but I don't want them to go hungry!

Also, I've been reading your snail blog, and I got to the page with the huge pictures of snails (Not sure if you remember, if was awhile ago; around page 7 or so)...I had NO idea that snails had eyes like that!! I'm sure that sounds ridiculous; of course snails have eyes! I guess I thought their antennae were eyes...or they didn't have eyes? I don't know. All I know is I sure was surprised when I got to that picture! Someone said afterwards that it looked like an elephant in a shell; that's a pretty good description, I think.

Ooh. You have Ghosts. Ghosts don't eat algae lol. They are scavengers. You want Amanos if you wanna get rid of algae. But putting in a wafer once or twice a week is good. I usually break mine in half and feed every other day.

Buh Not at all? Not even a little bit of algae? Well shoot XD I think amanos cost an arm and a leg here, too. I can't stock a tank when the shrink cost $5 each! I guess I'll have to make sure I feed them enough then. I thought maybe they did eat algae; I see them picking at the plants where there is algae on the leaves. Hopefully their new snail friend will help with that!

Also, I noticed you called it a Red Onion snail. Did my LFS just make up "tiger blood" because it sounds cool? The yellow and black stripey ones are still "zebra stripe," right?

Well... they eat very little. But yeah your feeding schedule should be fine lol. Amanos can be pretty expensive but they're worth it! You just need a couple lol.

Yeah the one you have is a Red Onion Nerite (Vittina semiconica). They are also called Tracked Nerites. Yeah yellow and black striped ones are Zebra Nerites (Neritina natalensis sp. "Zebra"). A lot of Pet Shops give their products new names because they sound better or they don't know what the correct name is.
OP

Can you mix ghosts and amanos?

Also (picking your brain if that's okay ), is it okay if snails hang out on the wall, right at the surface of the water? Does that mean he doesn't like my water, or...is he just hanging out? Thanks

Yep, you can do that easily.

LOL sure go ahead ;D. I don't mind someone digging around in my head at all (Heroes reference). When snails are at the surface of the water that means they are breathing. Snails, unlike fish, do not take their oxygen out of the water. They have lungs which the fill with a little tube that expands out of the shell towards the air. Once they take a few breaths they usually crawl off or just sit there. If a Nerite crawls all the way out of the water and sits on your lid or outside of your water for a long time ( a couple of days) that means he doesn't like your water.
OP

Interesting! Snails are turning out to be fascinating little critters. Thanks for your information! I may PM you to pick your brains again sometime By the way, do you know if Laura (/MD Angels, I think?) does just mystery snails, or is she a good all-around snail expert?

Fortunately he was still (mostly) fully submerged. I'll keep that in mind though, thanks!

They are quite interesting haha. Sure, I don't mind . Laura, I believe, only keeps Mystery Snails. But she does have a good knowledge of them. Some things applies to all types of snails. I started out with Japanese Trapdoor Snails and expanded from there ;D. Course that was over a course of a decade haha.

Yep, that probably means he's just breathing. Taking a break from being an algae eater lol.