So i just got my first shipment of caridina “chaos” bolts two days ago. These are the first caridinas i’ve ever owned. Unfortunately, they were stuck at the post office over the weekend (nearly 4 extra days). The box was smashed on one side and when i opened it, the water was really warm. Most of them were already dead when it got delivered. 4 were left alive but one didn’t look good. It kept flipping onto its side and floating upside down after putting it into the tank. I did drip acclimate them but cut it a little shorter than I would’ve liked because it was so late. The next morning, two of them were dead so I had two left. The two are still alive and are walking around and eating. They’re really tiny but i hope they make it. 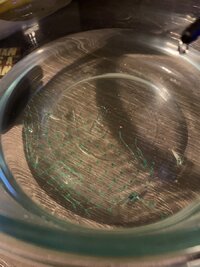 I also was looking at my other tank that has a female betta and a few otos. It used to have a handful of cherry shrimp in it but i noticed the betta was picking on them so i moved them to my other bettas tank who is much less aggressive (one of them is now berried!! my first pregnant female). While i was looking at the tank, i noticed two tiny cherry shrimp. I’m so confused because i pulled out all the other shrimp and none of them were berried (as far as i knew). They’re both smaller than any shrimp i’ve bought and i have no idea how they got in there. What a nice surprise lol still confused on how they’re there but was happy to find them.

That really is sad when something like this happens
Upvote 0

Erik Lucas sent me another full order of shrimp 10+2 and they all look great!! So happy nothing happened with the post office this time. He was easy to contact and gave me no trouble whatsoever. The skrimps are super active and super cute lol
Upvote 0
You must log in or register to reply here.

Cardinal/Saluwesi shrimp- Worth it? Suggestions?

Guide To Getting Plants To Turn Red Or More Colorful