I have baby mystery snails!! I also have questions! (And pictures of course)
My mystery snails finally started mating a couple months ago when I introduced a new one to my tank. I had gotten 3 pea-sized magentas a while back. I expected them to mate once they matured enough, but it never happened... and then I brought home a new blue one a couple months ago. Apparently, I had all females before, because this new guy instantly started mating with the 3 others. Within a couple weeks I had a small clutch (about 50 eggs), and then came a larger clutch (about 100). I now have 13 little mystery snails from the smaller clutch, and although they are only 5-8 days old, they are already showing colors! It appears that I have a good mix of blue, purple, magenta, and even ivory snails.
Question: With it being over a week since the first snails emerged and several days since the last, should I be expecting the rest of the clutch to hatch still or is it done? I have a mesh lid, so it doesn't stay as humid as other tanks with lids... is it likely that the rest of the eggs in that clutch dried up? I have the clutch sitting on the top of a breeder/isolation box with slots in the top, so they go down into the box after hatching (easier to feed them and keep track of them this way, while also making sure they aren't snacks for other tank inhabitants). There is condensation on the underside of the lid that the clutches are resting on, but not on the underside of the tank lid. I could place a very small plastic container with holes over the clutches to help maintain moisture, but would that result in mold growing on the clutches also?
Second question: I have been feeding them crushed up "snail snacks", algae wafers, calcium wafers, and small bits of snello. They have grown a bit and all that hatched are alive and well. Is there anything else I should be adding or doing instead as far as feeding?
Now for some pictures of snail babies, clutches, and one of the mama snails (click images for larger/clearer picture).
Blue baby: 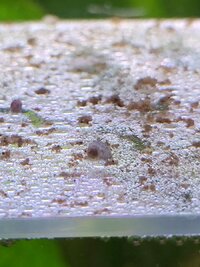 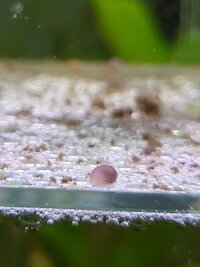 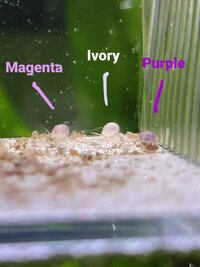 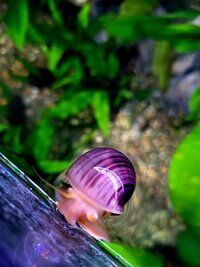 Clutches- The one on the right is partially hatched, it started off all pink and slowly changed to some blue and some pink eggs (and now looks like cotton candy dippin' dots). The clutch on left is the newest, still all pink: 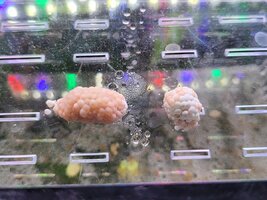 Are those eggs underwater in that picture?

You should enter the Mama Magenta pic in next month's photo contest. I'd vote for her!
Beautiful shell!

Are those eggs underwater in that picture?
Click to expand...

No, they are on top of an isolation/breeder box that is about a half inch above the water surface.

You should enter the Mama Magenta pic in next month's photo contest. I'd vote for her!
Click to expand...

Photo contest? I didn't even know about a photo contest. I love her color, I'm hoping some of her babies end up just as bright and colorful.

I hatched mine is a floating plastic tub and daily changed out paper towel damp, (not fully dripping wet ) below the egg sack
I think it took around 5-7 days to finish hatching.

Good luck with you clutch!

This makes me want mystery snail! That pic of mama magenta is stunning❤️

Not knowing much about snails, just curious did you transfer the clutches to the breeder/isolation box and how one goes about doing that.

That’s so cool to see their different colors already starting to show. Thanks for sharing this here. I agree mom magenta is lovely!

Not knowing much about snails, just curious did you transfer the clutches to the breeder/isolation box and how one goes about doing that.
Click to expand...

I transferred them. After about 48hours the clutch is solid to the touch and you can gently remove the clutch from the glass by gently twisting/sliding back and forth (millimeter by millimeter) and it will pop off the glass (it can be kind of sudden and startling the first time you do it). I had read a blog somewhere from someone who use to breed them and they suggested the isolation box (for the same reasons I mentioned in the op). It has worked out well for the first 13 snails, but Im thinking the rest of that small clutch dried out due to lack of humidity (I have a mesh lid). I just transferred the second clutch to a small plastic container with a lightly damp paper towel on the bottom, floating in the isolation box to increase both the humidity and temperature of the clutch (water is 78, room temp is 72-74). Hoping for a higher hatch rate from that one.

Thank you for sharing the process! I have not actually delved into snails or shrimp yet myself. But am thoroughly enjoying others’ success with them. Yours included of course!

Thank you for sharing the process! I have not actually delved into snails or shrimp yet myself. But am thoroughly enjoying others’ success with them. Yours included of course!
Click to expand...

Exactly what I was going to say!
And boy are those Magenta snails pretty!

They are so cute. The colors are fantastic. I had two mystery snails and they each lasted only about a year. Do you know if that's a usual life time for them?

They are so cute. The colors are fantastic. I had two mystery snails and they each lasted only about a year. Do you know if that's a usual life time for them?
Click to expand...

I've seen many people say 2-3 years. I had got one about 8 months ago that was about quarter sized, and it is still thriving and has gotten about golf ball sized now.

I've seen many people say 2-3 years. I had got one about 8 months ago that was about quarter sized, and it is still thriving and has gotten about golf ball sized now.
Click to expand...

Same with my snails.

It's crazy how big they get, but I only have 2, Sunburst and Tia

The second clutch is starting to hatch! 7 new babies so far! Looks like more will be coming throughout the day. I'm adding a couple photos showing the new babies with the old babies, click for larger/clearer pic. One picture shows a few purples with a newbie, and the other shows a blue (currently kinda white with blue spots that gives it a kinda smoky blue shade) with a few newbies cruising around. I can already see some blues and purples, and possibly some magentas and ivory (hard to tell until they get a little bigger)... And there are already 25 more new babies since starting this post. I definitely recommend the plastic dish with damp paper towel in the bottom. I changed out the paper towel every 3rd day to prevent mold/fungus. Since I have a mesh lid I also put a top loosely on the dish to help maintain moisture and humidity, and removed it 1-2 times a day for a few minutes to allow for fresh air. It looks like the entire clutch is hatching out this time, whereas my first clutch only hatched about 1/3. In total, there are currently 45 babies (13 from the first clutch, 32 so far from the second). 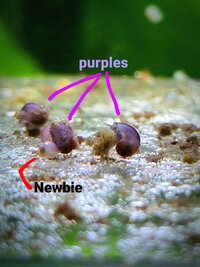 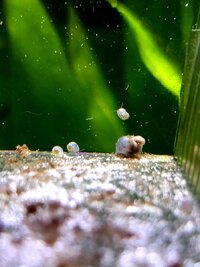 I ended up with 152 little snails. Looking forward to watching them grow, and hopefully finding a lot of good homes for them in the coming months.
You must log in or register to reply here.