So, long story short, dojo’s are illegal to import into Canada so I have to get them from private owners. Ugh!

Found another one!! And he’s healthy considering what he was living in. A little 3G half moon “betta tank” (I use that term lightly) with gravel, no heater or filter. (At least none came with the package deal). Little guy spent less then 24 hours in my 65g pool filter sand tank and he was already up to his gills in sand. He’s a bit of a funny shape compared to my pair, but considering he’s 4 years old it’s kinda a go-figure-he’s-a-funny-shape thing.

Also, because it was a “take all” deal, I have a new little goldy who is figuring out very fast that she lives with pigs and now head butts the loaches to get pellets. IF she gets along with Jupe (and vise versa but I’m not worried about her, he’s a big softie) then I just might hang on to her. She’s a little cutie. Biggest concern is the sheer size difference cause Jupe is pushing 7” and this little girl is maybe 3”?

Don’t know what to name them though. My other goldy is Jupiter, and the loaches (in order) are the new guy, California, and Sandy. (Ya’ll remember when she got stuck in a pot? She’s got a nice scar now the little moron...) 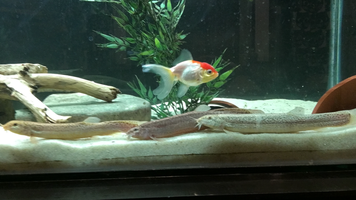 2 of the three are. gotta fatten the new guy up.

Lol they look great! Same with when I got my tire track eel lol. They look nice and healthy!

It's a Pity Party in my Post - And Everyone's Invited!

Info Before You Buy Flourish And Ferts In General