I've selected one of the males that originally came from a line of velvet guppies. It's a commercial strain which is also known as HB magenta, tuxedo magenta and tuxedo pink. The strain does have a platinum and störzbach gene as well which will enhance the metallic shine.
But the selected male does have much more black on his body than an average specimen of this strain. So, I've put 2 young virgin blonde panda platinum female guppies with him. I do know that in the F1 not a single blonde offspring will be born. I'm using specifically females of this kind for the male specimens of this strain do have similar body shape and tail shape. I'd like to enhance the black in the fins which I'm able to do with these females. Not that the females show black finnage but they will take care of it that the male offspring will develop black finnage. It's my goal to create a guppy strain that will show a roundtail and the body color should be metallic black with some blue fragments. 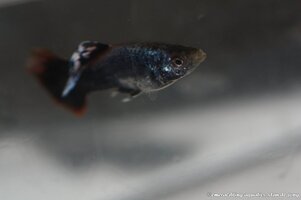 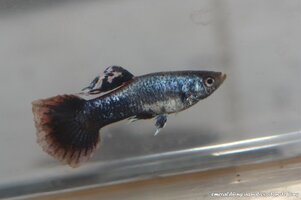 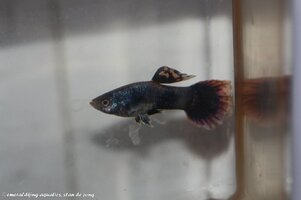 The project has just started. So, it may take some time before any offspring results will be posted overhere.