I just got a 33 gallon tank. It measures four feet long, and about a foot wide and a foot tall. So, its a pretty long but shallow tank. Any suggestions on fish that like that?

I would have livebearers, cories, and a bristlenose pleco in there. Guppies do best in shallow water. If you look closely at their backs, it is flat. This feature lets them cruise just below the water surface.

According to the aquarium calculator your tank is 30 US gallons. It's also the same size as my 2 -30 gallon longs
It would be pretty with Gouramis OR Angels as centerpiece fish. A whole heard of corys or otos, a couple of bristlenose.
One of my 30 gallon longs has Shellies in Them. They are very interesting to watch.
CArol

Actually, more shallow but longer tanks are better as they have more surface area exposed to the air - which is a good thing to have.

I keep an African Cichlid community in a tank of the same size.

Good suggestions guys. Marc, I have been interested in cichlids for a little bit now. What kinds do you have? And how many? Any suggestions or things that I should know about them? I'd take any info I can get.

Well, I have a ton of different kinds, some of which I don't know the names of. I can go take some pictures in a little bit.

For care, you're going to need alot of rocks. I bought a TON of "lace rock", which is basically old bits of reef rock. If you've ever seen saltwater "live rock", this is the dead version. They are good for making caves. You will need at the VERY LEAST 1 cave per fish, but you should have 2-3. Make some of the caves have small openings so the smaller fish can escape the larger ones. You will more than likely fill the tank with rocks - mine is chock full of them. It makes it nearly impossible to catch the fish without emptying out the whole tank, but the fish love it and it helps buffer the water to the high pH they enjoy.

As for specific kinds of fish - it really doesn't matter. As long as they are aggressive or hardy enough to do well, they can be put in. I have Jewel Cichlids in with Malawi and Tanganyikan Cichlids, though the Tanganyikan are the least aggressive. You will find a good 7 or 8 kinds of fish stocked at PetCO, Wal-Mart, or any other pet store that keeps "run of the mill" fish. You MIGHT be hard pressed to find a store that sells a larger variety, but if you are lucky enough to find one, you will not be disappointed. Even with just the common varieties, a tank will have lots of color.

You will want a powerful filter - in fact, get it rated for 60+ gallons. To have a stable community, you will need to really overstock the tank. I have 23 Cichlids and 2 Catfish in the tank, each averaging a little over 2 inches. This is WAY overstocked by most standards. I do a 25% water change twice each weekend and every so often an extra one during the week. It can get annoying but it's well worth such an interesting tank.

I'll post the pictures once I can get a few good shots with all of the fish.

I can try and get better pictures and the names for some of the fish if you'd like.

I think I'm sold. More pics would be great... more of the fish and then maybe one from further back where I could see the whole setup, just to see your layout... if its not too much trouble. Really beautiful though.

Any fish in particular? Or any colors of fish that you'd like to see and get the names of?

I like the white one, the blue one, the black striped one... lets start there I guess but honestly I like them all. 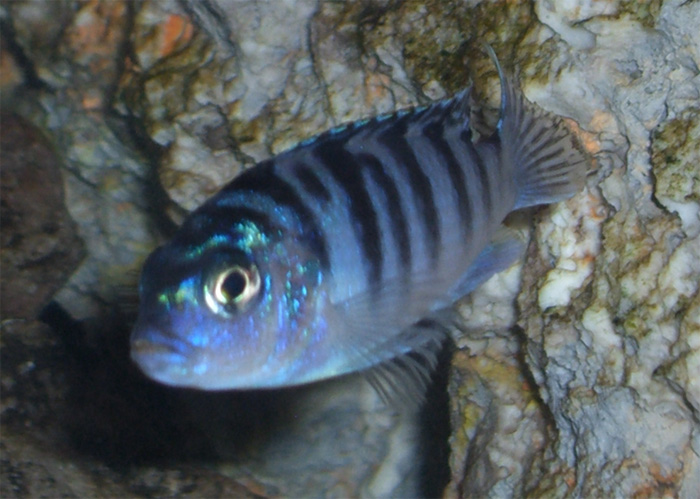 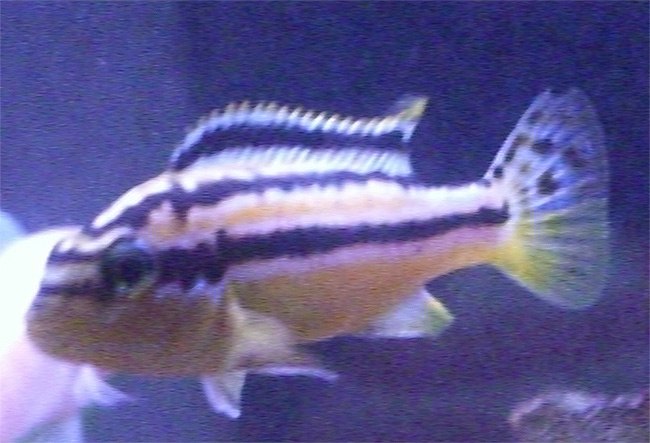 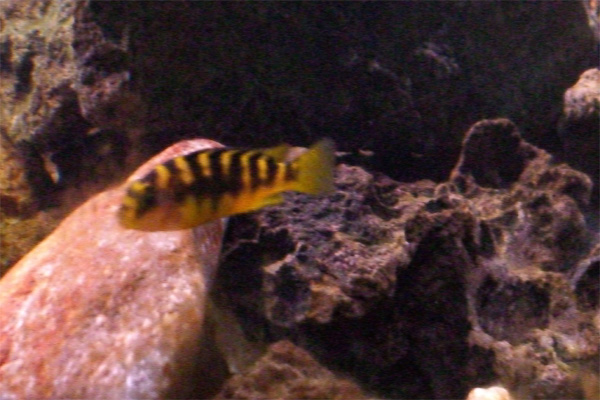 Sorry for the fuziness, my camera hates taking pictures without a flash! :

Marc, you live in ct... im close by on the border in new york. You know of a good place to go and see cichlids, possibly talk to someone that really knows what they are talking about. I dont mind driving a bit.

House of Fins in Greenwich, CT is really good. Check out their saltwater tanks while you're there. Waterbury Aquarium is even better and has a huge variety, but I'm not sure how far away it is from you.