Hi! I have a small nerite snail that I've had for about 3 weeks. He has grown recently, but the new part of his shell is very thin. You can see in the picture where the pattern stops and the new shell starts. My pH is 7.8 and I added a 1 inch piece of cuttlebone in his tank. I just changed it when I noticed his shell. I've tried feeding him algeae wafers, but my betta kept trying to eat it instead. I've also put spinach in the tank. After one day it was nearly gone, but I wasn't sure if it broke down very fast or he ate it. I had spinach in a cup of water to see how fast it broke down and it was still there after several days so I'm hoping he ate it, but every time I put some in front of him he turns around and starts going in the opposite direction. What can I do? 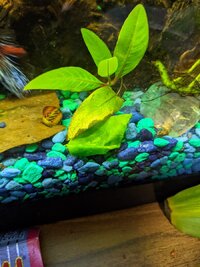 keep doing the cuttle bone it will take a while to strengthen his shell.
was he like this when you got him?
Upvote 0
You must log in or register to reply here.

Are my nerites dying?

Anyone have any tricks for reducing filter noise?