Nerite shell, pale on the edge? 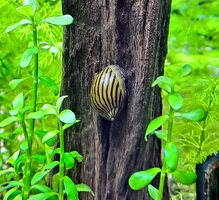 Not sure if new growth of shell, there is a clear line. Is there a lack of food or something? They have cleaned almost all possible surface in my tank from bba/diatoms in a month I've had them
Betta'sAnonymous
Member
Any calcium in the tank? I like to put things like Wonder Shell in the tank to add calcium to the water every couple months. Helps shell health a lot. But yeah, i think you have had some new growth there as well.
Nopsu
Member

Betta'sAnonymous said:
Any calcium in the tank?
Click to expand...

I added CC (into filter and mixed into substrate) and a bit of GH salt when I got them. My GH has been quite stable since (6-7).. but before that I've had the tank running after my last move at very low GH so I believe that all the algae that had formed before adding supplements and the snails; what they have since cleaned up might have been very low on Calsium and minerals or something..

Snails were not interested in veggies and I don't know if they have eaten any of the broken down algae wafers I feed for my fish (I doubt). I also drop mineral pearls (meant for shrimp and snails) into the corners near glass sometimes but not sure if they feed on those either since I've never seen it.

I have one cuttlebone floating on the surface in one top corner and I've once seen one of my other nerites on it so maybe he was the only one who've found it so far..

Symptoms of a Stalled Fishless Cycle and How to Fix it