Member
Hello all!
I am fairly new to shrimp keeping but have had tanks off and on for 25yrs or so, this being my first time having more than 2 tanks at one time! This is currently tank #4. So I've decided to start a journal on this one.
I purchased this tank stand and lid with a standard aqueon led light for 20$ on FB!
It was sold as a 20 gallon but it is actually a 15 gallon according to the measurements. 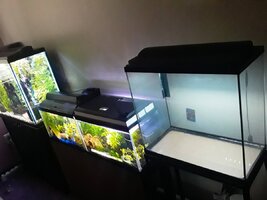 The tank had very little silicone in the corners so I added a nice bead to what was already there. I then used some BDBS as the substrate which I already had some of and purchased a couple small sponge filters and a air pump along with a airline and fitting kit. Also black poster board for the back! 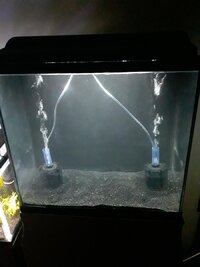 Not a bad start! I ended up modifying the each filter with an airstone that where included in the small line and fittings kit.
I then added a small stem of wisteria and a floating bit of water sprite and a baby java fern I found in my other shrimp tank (must have been in the guppy grass that came with my shrimp)! 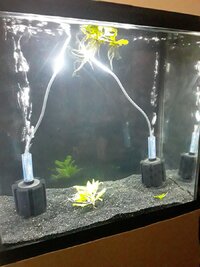 I then added a broken piece of terracotta pot and tied some moss to it and threw in some guppy grass also, along with this I rang out my cycled media into the tank a few different times and also dumped some waste from my 45gal with fish in it to get things going. 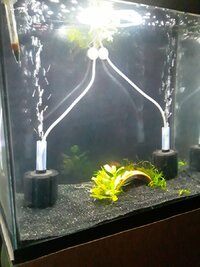 Next I found some cholla wood pieces at my local hobby store and added a handful of gravel from my 45gal to make a spilled pot look. 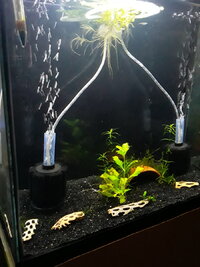 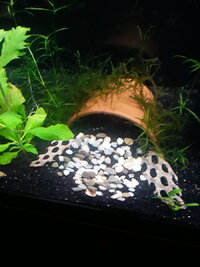 After that I added a little more gravel and purchased some plants online, corkscrew vals for the background and dwarf sag from the vals foward! At this point it's been a month from start. Also purchased 1 wcmm and threw in 1 ramshorn snail. 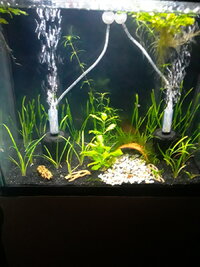 And FINALLY!!! The big moment! I just purchased 10 carbon rili shrimp! So far so good but it's only been 3 days. 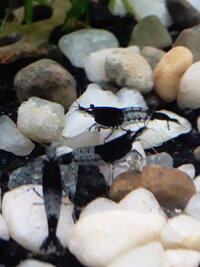 I will update as things change!
Let me know what you guys think!

I try to stay as cheap as possible.
Thank you!
From here in Cincinnati

Member
Hello all, back here with an update for whomever may be following this thread! So far the carbon rilis have been doing good and as for the spiral val it has been melting old leaves like crazy, but also growing new! And as for the other plants ( dwarf sag, wisteria, guppy grass, & water sprite) they all seem to be doing well! However mister wcmm is now being removed after watching him steal a piece of food right out of one of the shrimps claws/hands today, I am quite sure after having my first wcmm that it will surely go for baby shrimp if or when that may happen assuming I have luck starting a colony! Again, so far only 1 down out of 11 so I now have 10! I have a video but cant upload it, will get new pics and post tomorrow! 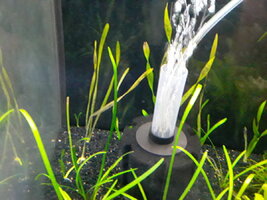 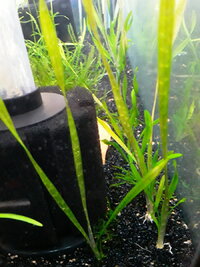 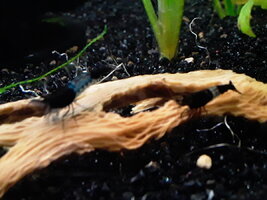 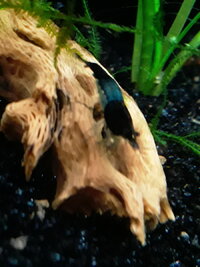 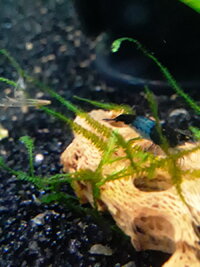 Member
Back with another update! Less than 3 weeks since I received my carbons, and today I have the first berried one! Excited to see they didn't send me all males!

Nomofish said:
Back with another update! Less than 3 weeks since I received my carbons, and today I have the first berried one! Excited to see they didn't send me all males!

Great job on the tank! That's always soooooo exciting to see the first berried female in a new colony. Cant wait to see some shrimplet pics! 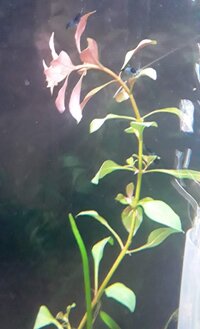 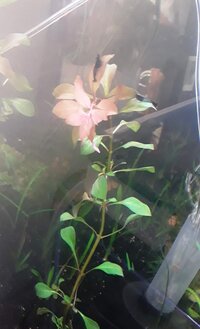 Quick update on the tank! The day after my last post, which was valentine's day, I woke up to my second berried carbon rili!! Two in 2 days! Still no babies but there should be plenty soon! I did add 1 stem of ludwigia repens I think it is! Bad daytime glare but there it is! Feeding blanched zucchini and yellow squash today at the same time to see which one they like better!!! May return later with some pics and results!!

Member
Zucchini for the win! 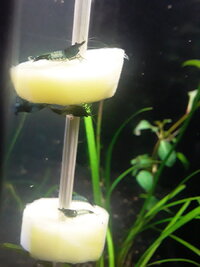 Member
Even though it seems as nobody is following this thing I'm back to log my progress with the tank/ neighboring tanks. Still 2 berried carbon rili shrimp and no babies as of yet. And it seems as if my corkscrew vals have completely failed, everything else is doing good in shrimpntank #3, I recently changed the background from black to white and lighting from aqueon color max led tube over to hygger full spectrum 9w bar I believe it is, this light was 1 of 2 that I had on neighboring 10 gallon shrimp tanks with janky modified hoods to accommodate the hygger light bars (seen in pics at top), well that didn't work well as one got wet and fried half of the LEDs 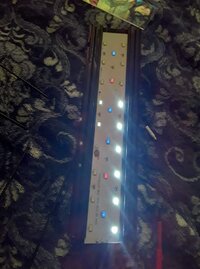 So I decided to use remaining hygger bar on this tank I'm doing the journal on. And the most exciting part out with the ugly hoods and in with plexiglass which was originally going to be my lids for the 10s but I changed my thoughts and decided an open top setup with a sneeze guard type thing going on! Plan is to now use 36inch nicrew sky suspended from a shelf over the tank and my goal here is to get plants growing tall out of the water and hopefully some flowers to look at! 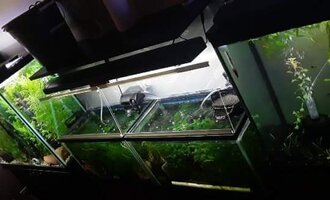 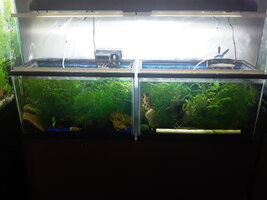 I have created a thread in plants section asking for recommendations on a plant that will grow out of the water a maximum 6 inches and actually flower out of the water. So far no luck on any suggestions. 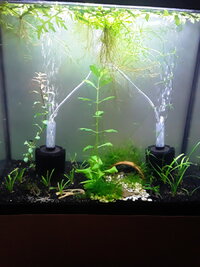 And lastly a current pic with no corkscrew vals growing and the white background as compared to the black in the previous pics.
Until next time!
Happy shrimp keeping!

Member
Ok well, back with an unwanted update, doing some tank maintenance today and before I even touch this tank, i see something slithering along the top of my black sand, so i quickly grab baster which was near, open lid slowly move in and start trying to suck this wormy thing up, it starts to dart and swim around like an eel, I'm freaking out at this point, **** is this thing I ask myself, turns out I have found a leech in my tank still no baby carbons and now 3 berried, and no deaths other than 1 shrimp since I got them. Now I am wondering if there are more and what to do, has this thing been living off bugs and worms or snails under the substrate? It was a good inch long or more when stretched out, I thoroughly inspect my plants or so I thought and keep them floating in a bucket for a few days while going over them a couple times each day, so I'm not sure if this is a new member or if it's been here for awhile. So from here I guess I just keep looking for more and see what happens, I'd sure hate to have to start this tank all over‍♂
Not so happy shrimp keeping today 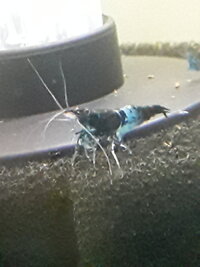 Here with an update on this post!
Since the last update when I found a leech in this tank, I have not seen anymore since and haven't noticed any deaths and the shrimp seem to be doing GREAT! Lots of breeding! I've counted 20 from the 1st clutch and I've recently seen a couple from a new clutch! Also 2 currently berried mommas again!! 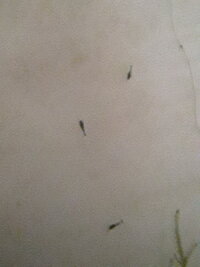 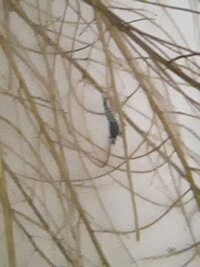 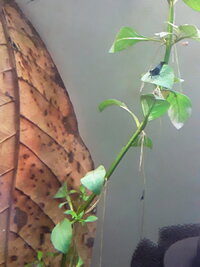