Need Help Figuring Out What Killed My Female Guppy

kbbartel93
So we have a 45 gallon tank with 8 male guppies, 2 female guppies, and 4 mollies. 2 days ago I did a 30% water change around 5 pm, and long story short did everything exactly the same as I always do with the same water, conditioner, and equipment. The whole day she was acting normal. Then when I went to feed them that night around 8/9 pm I noticed she was hovering about 4 inches from the surface. She wouldn't move more than an inch in any dorection, didn't move when the others bumped her, and didn't go after the food. So I watched her for a while an noticed only one side of her gills were moving and the side that was was rapid and swollen looking. So I set up the "breeder box" that we use for isolation purposes so I could make sure nobody messed with her and keep an eye on her. She didn't fight when I netted her and barely moved at all. She acted exactly the same in the isolation box as she was in the open tank. I added some food in there for her and even put a piece of an algae wafer (which they all usually go nuts over) she didn't even attempt to eat any of it. Sometime between 11pm and 530 am she died. Before this I had taken a water sample to our lfs because I'm out of testing supplies and can't get more till pay day, they said my water was perfect. My fiance took her body and a water sample there after she died and they said there was trace amounts of ammonia, which they said was most likely because of her dying and being in there for a few hours dead. He's bringing another sample in today to recheck. None of my other fish have any signs of illness. Could one of my males have hurt her trying to knock her up? It looked like her one gill was stuck shut. Any info is appreciated. I attached some photos. It won't let me attach the video I took of her breathing 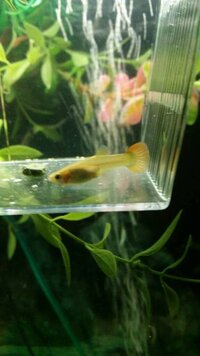 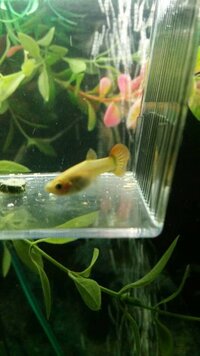 DutchAquarium
The gill does look very red and pulled back. Is their any way to get a more clear picture? These are sympton of poisoning, which could be ammonia or lack of 02. However, it's weird the others didn't show any signs.
kbbartel93

The gill does look very red and pulled back. Is their any way to get a more clear picture? These are sympton of poisoning, which could be ammonia or lack of 02. However, it's weird the others didn't show any signs.
Click to expand...

Those are the best I got. I have 2 good videos but it keeps telling me that the file type isn't supported and won't let me upload them. I'm on an Android device so idk how to get them to work. The remaining 9 guppies and 4 mollies are all acting and look normal. They're active playful and feeding normally. I can't figure out if this was illness or injury.

Those are the best I got. I have 2 good videos but it keeps telling me that the file type isn't supported and won't let me upload them. I'm on an Android device so idk how to get them to work. The remaining 9 guppies and 4 mollies are all acting and look normal. They're active playful and feeding normally. I can't figure out if this was illness or injury.
Click to expand...

The side pictured was the one that she was using, it looked swollen and was moving rapidly. Other other side looked like it was closed completely and didn't move
ColmC
You need some more females as 1 female to 8 males !

She will be terrorised !
kbbartel93


These are links to the videos I look of her breathing. I just uploaded them to youtube since it won't let me put them on here

You need some more females as 1 female to 8 males !

I get that. But is that what killed her? I can't add new fish now until I find out what's going on. The other female is fine.
BobNJerry

I get that. But is that what killed her? I can't add new fish now until I find out what's going on. The other female is fine.
Click to expand...

i'm going to guess that if you have 8 males to one female- i'm going to go out on limb here and say - she's stressed. She's being chased by 8 male fish.
kbbartel93
There were 2. We had the males first and wanted to add in some females, we won't add more than 2 fish at a time due to a bad experience with ammonia and such. So that's the main reason why there were only 2. I was planning to get a few more every other week so they'd have time to quarantine in between adding

I'm not looking to breed for profit or anything. We liked the idea of them basically keeping their own population going and not having to risk our other fish's health by bringing in pet store fish.
ColmC
I would say add 4 in a week or so if no deaths and do more water changes then just adding 2.
kbbartel93

I would say add 4 in a week or so if no deaths and do more water changes then just adding 2.
Click to expand...

I just did a water change now. Did like 30%. Took all my plants and such out so I could really get in there and get everything. I almost think she got hurt by a male or a couple males trapping her. If they squished her could that cause her one gill to get stuck shut?

I'm for sure gonna wait till the end of next week before adding any more. But I'll be sure to get females lol. I thought the 2:1 was for breeding purposes I didn't think they'd harass them that much
Andy S
Can't say for certain but a ratio of 8 males to 2 female guppies is really asking for trouble, the males will be harassing her constantly, you really need at least two females to every male, ideally more than that so that they do get at least some respite from the male's constant attention. I suggest that until you are able to sort out your ratio you would do best to put your one remaining female in the breeding box. She is going to be harassed constantly by 8 males.
kbbartel93
Honestly the remaining female doesn't get any male attention. The males harass each other more than they even glance at her. I tried putting her in the breeder box after the other female died but she freaked out. She kept slamming herself into the walls of it. I figured that was more stressful than anything for her. We have 5 1 week old fry in our quarantine tank, they were a surprise from a previous female that we didn't know was pregnant, she died after having them so we caught all the babies we could find. Once they're too big to be eaten I'll put the female in there until we get more females.
DuaneV
I've had guppies for over 40 years. WAY too many males to females. They stressed her out for sure. Either go all males or reverse the ration to 2 males, 8 females.
kbbartel93
Ok. Once the 5 fry are a little older I'll move the last female to their tank so she's not stressed. I don't wanna try the breeder box as a separation technique again with her, she was really upset by it

How big should the fry be before they're safe from her eating them? They're a week old. We wanna make sure they all make it because the mama they're from died after birth.
kbbartel93
So...I was wrong. The one that died was the only female. I put the one I thought was a female in the breeder box so I could look at it more closely. It must be a very very young male. We were sure it was female. But the longer we've had it the more that looks like it's his thingy than a fin. I feel so bad now. That poor female was stressed and bred to death basically.
ColmC
Don’t feel bad, I just think you should get 4-8 females in one go and just do more water changes to start with when you first get them so the attention more spread out
kbbartel93
Well now that it's down to just males we've decided that we are going to wait and see what the 5 fry, we caught and moved from a different mama that died after birth, are. If there's any females we will just keep them in the smaller quarantine tank and decide if we wanna breed them at all
Share:
Facebook Twitter Reddit Pinterest WhatsApp Email Share Link
Top Bottom