I'm tearing down another one of my almost-no-maintenance tanks and replace it for a smaller aquascape. I'm really enjoying the new ADA 60F model tanks; one that I used recently for a chocolate gourami peat swamp. The new model has a similar footprint as the old one (24 inch/60 cm in length, 12 inch/30 cm deep), but the definition of shallow has gone up to a staggering 10 inch/25 cm height, which gives a total volume of 12 gallon/45L.

I had a riverscape on the agenda, but I simply can't find the proper stones for what I have in mind. Instead, I'm going to create a so-called "jungle style" aquascape; I bought another ADA 60F for this purpose.

The "jungle style" is probably the easiest aquarium to create and maintain. It's the evil brother of the "Dutch style". And although I'm Dutch myself and I recall my grandfather kept such a tank, the well-ordered and scrupulously kept clean tanks, never interested me. I lean much more towards chaos and avoiding the use of technology as much as possible.

For any beginner who wants to start with live plants, but without the CO2, the "jungle style" is almost a walk in the park. Especially when using a shallow tank.

For scaping I will use spiderwood only. I might add a few "grey mountain stones" or "elderly stones" in the future. I might also add a bit of sand in the front; but this should really be the final step. The tank's ugly background will be replaced with a dark window screen.

The result I have in mind is to create a valley, so slopes on the left and right, as well as a corridor that starts in the front and then moves somewhere to the left. It is not going to be a very distinctive "street", which you often observe in aquascapes, as if humans were interfering with nature once again. It should look natural. Let's see if I succeed. 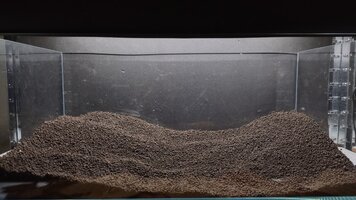 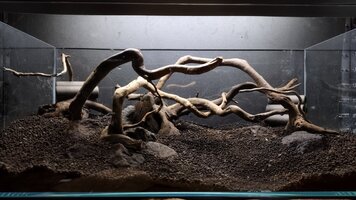 This is the fifth or sixth attempt of creating a "random" display of wood. I added a few Koke stones (dark lava stones with a less coarse structure ) for support and looks. More stones will follow as I plan to add a lot of bucephalandra's in this tank.

A few more stones and twigs will be added along the way. Also a few branches at the left front and right front, pretending to be tree roots.

The valley, right of the center, is already clearly visible. It will become less wide, once I start planting and adding a bit more hardscape. I might add a lot more stones in the valley with sand in the middle, or leave it as is and trim the plants that will grow in this spot to create a sloppy carpet.

The "secret passage" is less visible but already in place; left of the center between the branches moving upwards to the back. The passage will be more distinct, once I start adding plants around it. Creating passages in aquascapes keeps the scape interesting to observe.

I added two "shrimp flats" in the corners, for the Dario fish. Both will not be visible once I finish planting.

Up next, plants, plants and more plants. No dry start. All plants are taken from my other tanks. If you cover at least 70% of the tank's footprint from the beginning, there's no need to worry about algae.

Technology-wise, I'll start with a hob filter of one of my other tanks.

Yes; tank is fully planted and is starting to look really nice. The substrate has leveled a bit too much for my taste due to grazing shrimp. The carpets haven't taken so much hold in the substrate yet to keep it together. Best way to compensate is by adding more stones, which I intend soon. I'll post updates once I've rescaped.

Update on this tank...
I took the wood/root scape from another tank.
It has a few Caridina shrimp in it and a couple of Dario tigris that already reproduced in this tank.
The "carpet" plants are lagging a bit, but I have the patience. If the carpets are double or triple in size, I might make a sand part in the front. 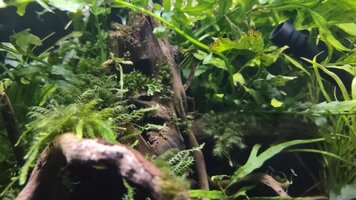 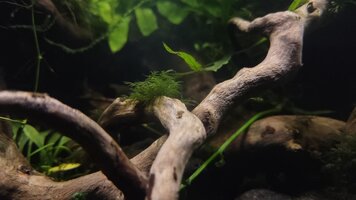 Dario couple
View attachment 855173
You must log in or register to reply here.