Found 2 of these in my 10 gal QT, only occupants are a million ramshorn snails a java fern and several baby ferns and 2 pieces of driftwood. (none of that is too necessary I suppose...)

Does this look like a mosquito larva? If not, what could it be? 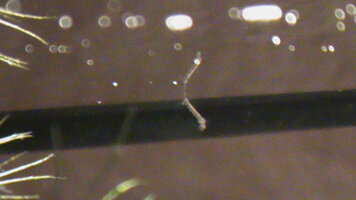 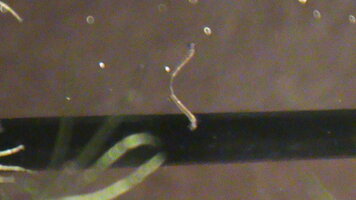 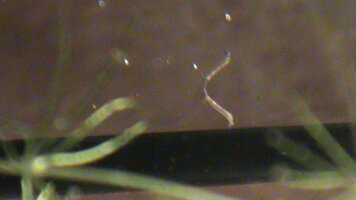 Hmmm that looks like what I found munching on my mystery snail. not sure what it is but it killed my snail...

tunastrack said:
Hmmm that looks like what I found munching on my mystery snail. not sure what it is but it killed my snail...
Click to expand...

interesting! hmmm (by the way I love your avatar pic! sounds like me!) It LOOKS like mosquito larve to me, but I've only seen them in person in a trough, and they were bigger/fatter and red or black ... almost worm like. But the "swimming" motion is the same. If it stays like that then I don't mind it being there ... if it's gonna grow into a blood sucking critter, :/ I'm not interested!

So easy/effective method of removal? Since they wriggle, I guestimate a good vacuum may not do the trick?

If they are the same size as skeeters, they will be easily removed via vacuum
Y

You should be able to net wrigglers out with ease.