Bettybrown922
Member
So, I was at my local corporate pet store today. Yes, I know I shouldn't shop at those places...but that's another forum subject regarding my all-out obsession that pushes me to shop wherever I can get my hands on what I'm craving. Today I wanted to add some ghost shrimp (I named them Rick Sanchez) to my tank, "The Citadel".

While waiting for the clerk to get my ghost shrimp, I mentioned that I'd purchased a Gold Mystery Snail (Morty) from them a few months ago and that within days of putting in a Blue Mystery Snail (Tyler) I bought from an Ohio dealer, Morty began laying egg clutches - 5 now in about 10 days. Here response took me aback a bit. I expected her to tell me they probably aren't fertile eggs, but she actually claimed that all of corporate-store's mystery snails are breed to be hermaphrodites. Huh? Wha? They'd really go through the hassle of breeding a new type of Mystery Snail just to avoid mating? It's so easy to get rid of the eggs if you don't want them. I have NEVER heard of hermaphroditic Mystery Snails.

Anyone else heard of this before? I'm a newbie-ish to invertebrates but I still think I've read multiple times Mystery Snails are either male or female. And I've never seen it mentioned, "except for at that one corporate store - theirs are hermaphrodites." 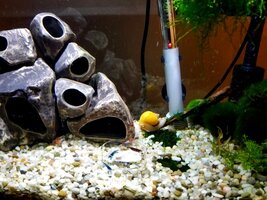 Ghelfaire
Member
No, one of your snails is a female. I think they are pretty impossible to tell until they mate.
Wrench
Member
Nope...and they need brackish water the spawn anyway
Ghelfaire
Member