Alright so I added some fish (7 Glofish Danios, 1 Glofish Shark [Rainbow Shark]) to my newly cycled tank a week and a half ago, and I've been going through some THINGS! lol

To date, four out of seven of the Glofish Danios have perished. At first I thought that maybe I had crappy stock from the LFS (as my water parameters have been perfect and are checked every morning), and then starting yesterday I thought maybe I could have some sort of internal parasite issue instead or as well as, because one of the dead danios looked kind of bruised in areas (I'm currently treating with PraziPro). Most of the danios deteriorated over a period of 12 hours or so (maybe they were badly attacked and took time to succumb to injuries?) doing typical sick danio behavior, however, this morning a danio who had looked healthy and was acting normal last night at lights out showed up on the bottom of the tank dead.

One member here suggested that it very well could be my favorite centerpiece, Valentina the Rainbow Shark, doing this to my danios. I know that they can be aggressive but everything I read made it seem that didn't happen until they grew older. Currently my "shark" is a little over an inch (maybe the size of a pinky), could she be doing this to them? I just feel like she's too small to hurt them like that, but I'm definitely no expert. I also thought that they typically did well with Zebra Danios, which are what these Glofish are.

Does anyone else here have any experience with small, young aggressive Rainbow Sharks? Any insight would be most helpful. Thank you. 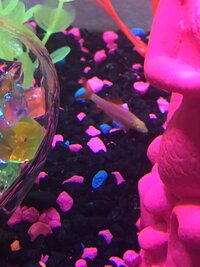 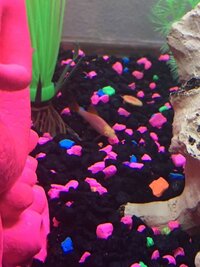 I had to put a rainbow shark I had in with a tank full of African cichlids because it was very aggressive. It still held it's own against them too! I wouldn't put it past the rainbow to be the culprit honestly. I didn't even know they made glow lite rainbow sharks now as well.

I mean, I knew there was a chance I’d be relocating the shark to a larger tank when she was older (seemed like at about a year they tend to show their real personalities) but dang, she’s that small and already potentially killing danios her size of not a little larger.

Nope, mine was aggressive right off the bat too and it was just a little thing, got big really fast though! When I sold my cichlids, and it, it was already pushing 4 1/2 inches and it was fairly thick too. They can get about 6 inches and they can be mean as heck!
I had it in with yellow labs and demasoni....and demasonI can be really nasty as well!