My betta's name is Bette Midler. She's blue and I think a half moon tail. I've had her for about six-eight weeks. She's been growing, so I figure she's pretty young.

For the first few weeks after I got her, she was happy and energetic. She responded to my voice and studied my face. She wiggled and played--and ate well. She loved to eat. I gave her 2-4 pellets twice daily, and she chewed them enthusiastically. Every few days I thawed bloodworms for her. She went nuts for those. I'd put some on the tip of my finger and hold it about a quarter inch off the water. She jumped out to get her worms. Sometimes she grabbed my finger and held on for a little wriggle.

She's become lethargic in the last couple of weeks. She used to have such energy, but now she just sits on the sand or between her coconut and the wall of the tank. She comes up when I open the lid. I drop in a pellet just over her mouth. She ignores it and drifts. I push it over to where she is but she's not interested. If I push it around so much it sinks, sometimes she'll chase it down. She'll grab it and hold it in her mouth for a couple secs, not chewing, then spits it out. Goes and gets it again, spits again. She'll do this until the pellet is on the sand. I try again with a new pellet and get the same result. I doubt she swallows much at all--if anything.

I tried bloodworms. She acted excited at first, but did the same thing: held them in her mouth for a bit, then spit them out.

It's been a couple of weeks of this and I'm worried. She's starting to look pretty peaked, and she's wearing stripes all the time.

I've tested the water several times since she stopped eating, and it's good (numbers below). I got a small piece of mopanI wood to decorate with, but it turned the water the color of tea, so I took it out. (I haven't been able to change the water for about three weeks as I have a sprained ankle.)

Tank
What is the water volume of the tank?
Five gallons

How long has the tank been running?
Four months

Does it have a filter?
Yes

Does it have a heater?
Yes

What is the entire stocking of this tank?
Only Bette Midler

Maintenance
How often do you change the water?
Every two-three weeks

How much of the water do you change?
Depends on how long it takes me to vacuum the sand. Usually up to 75%.

What do you use to treat your water?
Prime

What do you use to test the water?
API master kit

What are your parameters? We need to know the exact numbers, not just “fine” or “safe”.
Ammonia 0
Nitrite 0
Nitrate 10
pH not tested

Feeding
How often do you feed your fish?
Twice daily, occasional fasting for one day

How much do you feed your fish?
Two-four pellets or a bit of bloodworms

What brand of food do you feed your fish?HikarI Betta Bio-Gold and Aqueon Betta Food (both pellets). Don't know the brand of the frozen bloodworms.

Illness & Symptoms
How long have you had this fish?
Six-eight weeks

How long ago did you first notice these symptoms?
About two weeks ago

In a few words, can you explain the symptoms?
She won't eat. She seems to play with her food, but she's not playing, and even though she takes food into her mouth, I think she swallows precious little. She is lethargic, looks and seems weak, her color has dulled, and her stripes are on all the time. She seems skinny--I think she is skinny.

Have you started any treatment for the illness?
No

Was your fish physically ill or injured upon purchase?
No

How has its behavior and appearance changed, if at all?
She's become lethargic and sits all the time. Her color is off and her stripes are on. She's skinny.

Explain your emergency situation in detail.
I think with all I've written, it's all covered.

Thanks for whatever advice you can offer.

I'm going to say that your betta might be constipated. The amount of food that you offered her in a day seems a lot for a betta.

I would like to see what she looks like. Can you get pictures of her from different angles?
OP
H

Hmm... so much for guidelines. Those same guidelines say I should give her a piece of a pea. What do you think about that?

Yes, but it'll have to wait until this evening, when I get home from work. Thanks.

HappyClammy said:
Hmm... so much for guidelines. Those same guidelines say I should give her a piece of a pea. What do you think about that?
Click to expand...

You should do at least a 3-4 days fasting period. If nothing is improving, then you should feed a pea to her. The problems with pea is that most bettas refuse to eat it. That is not their natural diet.
OP
H

Well, I wasn't able to get her from different angles. But I did get a few. Sorry it took me so long.

The first two are from Monday (7/15). The last is from today. I'm afraid she's starving to death. She's so skinny and is losing energy. She still hasn't eaten, although she did have a bit of pea (second picture). She actually took a bite and kept it down.

Her color is terrible. These are terrible pictures, but her color really is bad.

What do you think? 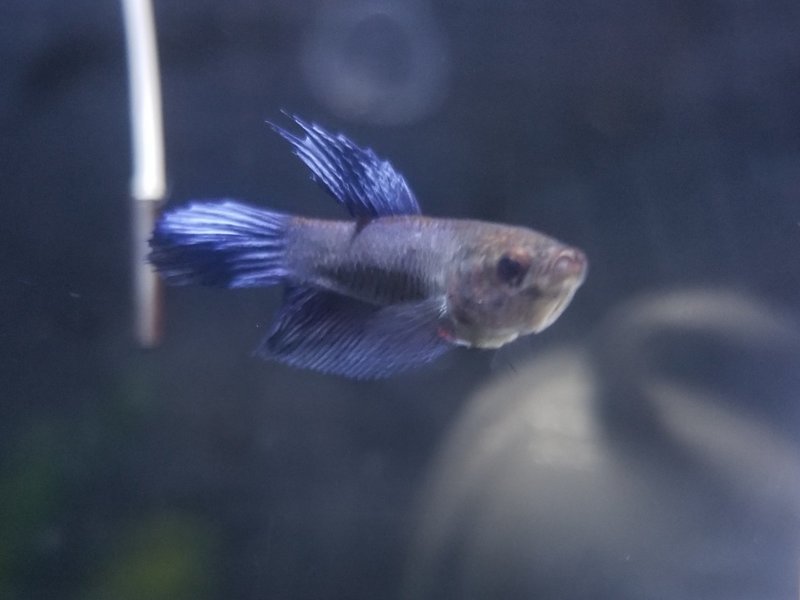 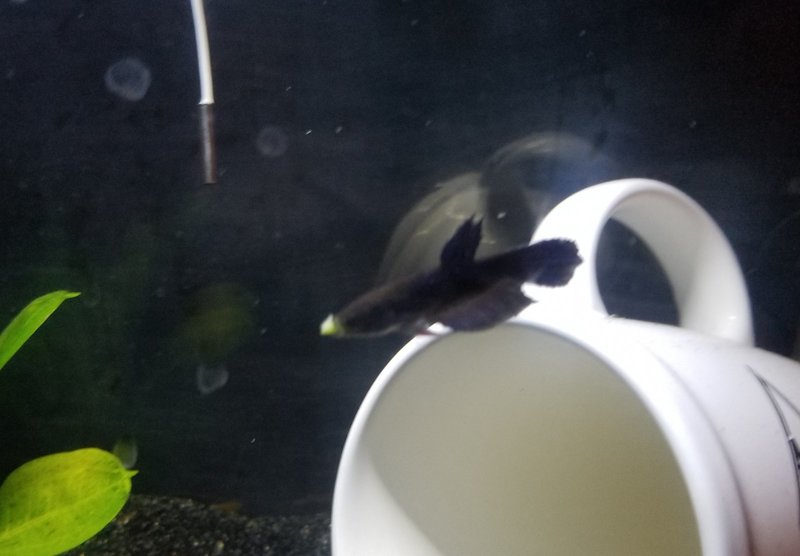 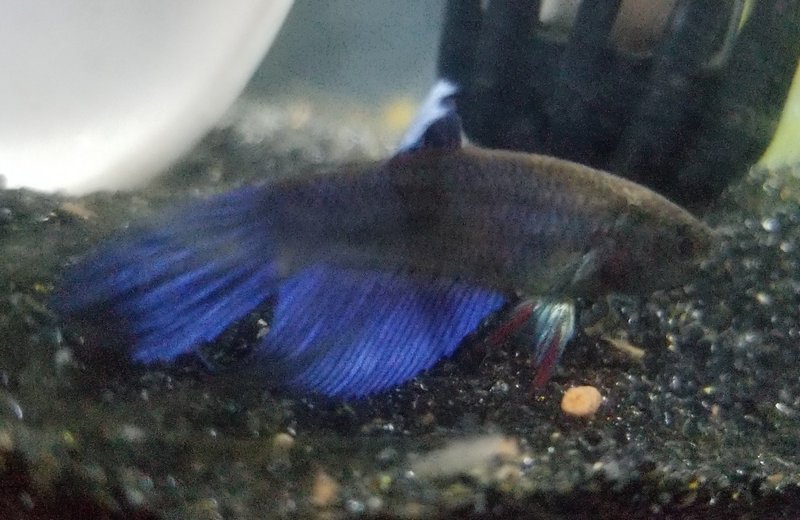 Crispii said:
You should do at least a 3-4 days fasting period. If nothing is improving, then you should feed a pea to her. The problems with pea is that most bettas refuse to eat it. That is not their natural diet.
Click to expand...

I fasted her from Tuesday until today. But I don't think it matters -- she's just not eating. She ate a very small bite of pea a few days ago. But she won't eat her pellets. Could it be her food? (I'd swear I saw her yak once.) She takes a pellet, but it never stays in her mouth.
OP
H

Bette died last Saturday. I think she starved. She just wouldn't (or couldn't) eat. She was so skinny.

I found her hiding in a plant, which she never does, and she was on her side. I couldn't tell if her gills were moving, so I very gently nudged her out of the plant until she was lying on the substrate and I could see her. I watched for a long time. Her gills moved, but not like they were giving her life. I euthanized her.

There was one weird thing. On her underside, behind her gills, was a small silver patch. I'd never noticed it before. Could that be some indication of how she died, if not of starvation? Have you ever seen that on a sick fish - or any fish?
Share:
Facebook Twitter Reddit Pinterest WhatsApp Email Link