Hey guys, new here and just set up my new top fin 10 gallon tank. Currently have 2 cherry barbs, but no sure what the sex is. I think I want to add real plants soon - any tips would be great. Will add more fish once the tank is cycled.

1. Can someone tell me what the sex of these cherry barbs are?
2. What kind of plants should I add?
3. Suggestions for new fish to add once the tank is cycled?

Also, I replaced the 2 incandescent bulbs that was included with 2 13 watt GE fluorescent bulbs I had around the house. 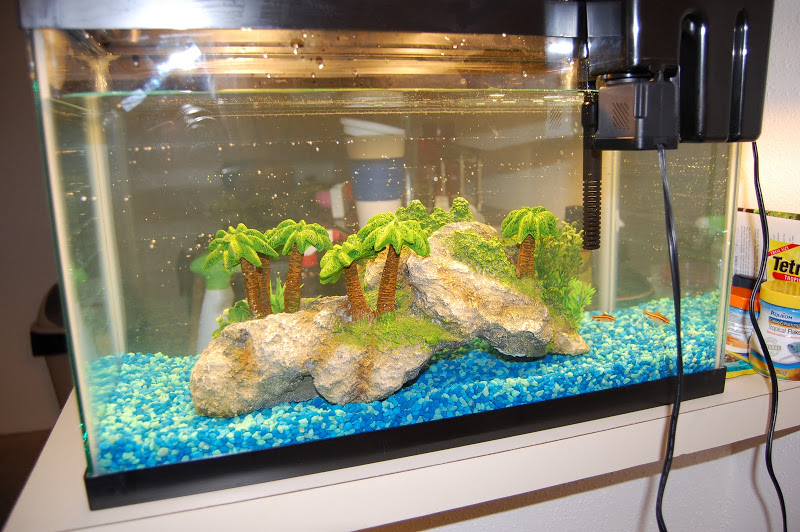 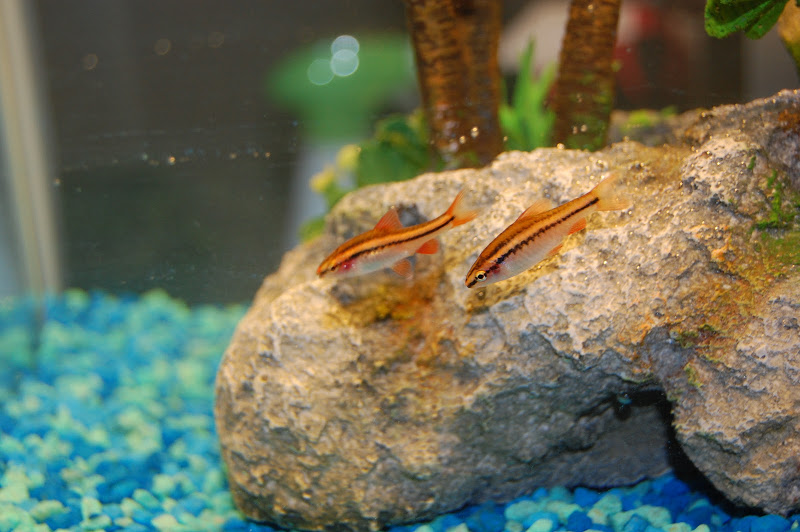 Cute tank and cute fish I'm too new at this so I can't give you any suggestions for other fish but welcome to fishlore!

Aww your tank is very cute! sorry I can't help with sexing your fish

Welcome to FishLore
Hope you don't mind I moved your thread into the beginners section.
You're more apt to have your questions answered here.

Personal I think you should do a fishless cycle, but anywho.

If I was to guess, I would say you have two females, the males are really really red, and the females more brown red, you can tell better once they have settled and the colours come out

For plants I would start off with some basic fast growing stuff, they will help your tank out as far as using some of the nitrates in the water. That in turn will cut down on water changes once you have cycled.

As far as what to pick for plants. I would say 2 or 3 anacharis, a moss ball, and a few tufts of Dwarf hair grass. That will give a nice tiered look and provide both bottom, and top cover once the anacharis grows and starts to float on the top. The Moss ball would be a great center piece plant.

Those 3 plants are really easy to care for, cheap for the most part, though the moss ball will run about 12 bucks for a good one. The anacharis can be clipped off and the clippings planted in the bottom if you really want to get a forest of plants going.

For fish I like livebearers, and an interesting one to keep is Mosquito fish, they are big guppies for the most part without the color. They are hearty and provide their own population control better than even guppies do. I would say 3, 2 females and 1 male.

If you want cheap and abundant color then guppies are the way to go. Same porportion of females to males, or all males. If you stack too many males to and not enough females they males can pester a female to death.

Endels Livebearers are also a cool fish that don't need much space. They are little tiny guppies, but tend to be a bit pricier as they are uncommon in the wild.

I am not sure how the barbs will get along with the types of fish I advised, so if you want to be safe go with the mosquito fish as they are the tougher of the 3 species I suggested. Mosquito fish will also be much more tolerant of the cycling process as they are small pond fish and can survive in a huge range of water conditions.

I hope that helps.

that's the same color gravel I have in my ten

Thanks for the comments and suggestions, I will take that into consideration. Will take more pictures once I have added plants and more fish.

Java ferns are good plants for starters and good fish to get next, maybe a little more cherry barbs and other barbs like tiger barbs are cool

If you are going to put live plants make sure you have proper lighting in order for them to thrive. I personally use 2 cfl daylight 14 watt bulbs. It keeps my aponogeton plants happy and also I'm hoping that it keeps my anubias nana happy too.

HI there!!
Your cherry barbs are only showing slight colouring at the moment. This means they're probably still juveniles. When I first bought them I was quite disappointed going "Cherries aren't cherry!!!" but the gold stripe usually indicates youth.

They do look to have a nice red overall tint, which hints they might be male but until they colour up fully you won't be able to tell.

Female cherry barbs don't turn red, they just kind of... darken. They will also have a slightly more curved belly and grow larger. I currently have 5 adolescents, 2 mature males and 2 mature females. The females dark area is such a dark brown/red it looks black sometimes and the stripe which on yours is currently gold turns a lovely dark red/amber colour. So really they do end up looking a little dark cherry.

The males will stay more slender, and slightly smaller and turn a real red. When they mature you can really notice the difference. The males whole body should turn the red that they currently have on the fins. So a bright red cherry.

When they want to mate, they'll turn even darker and the males will go a real solid red.

I wouldn't put guppies in with the cherry barbs, unless you have 8 or so (people will say 6, but my 6 nipped until I bumped it to 9). They are cheeky little nippers and with only two, especially if they're male they will def. nip.

I haven't had any problems with them nipping mollies, infact my adolescent cherries school very happily with my mollies and dart about in the writhing mass.

Also, cherries like hiding holes. Having a heavily planted area or a cave is something they will like. I'd just pick a back corner and put two bushy plants there. Also good for if you get more cherries, they do... tease/harrass eachother a little. They set up a minor heirarchy with dominant males and females and by having hiding holes/plants they won't get stressed.

Oh one more thing. I've noticed my females act more "foxy" than the males. You might notice the way they flick their gills and fins. I think it makes them look like a fox! The females seem to do it more than males.

Edit: noticed someone suggested tiger barbs. I wouldn't get them in the size tank you have, unless you remove the cherries. Tigers are pretty aggressive fin nippers, and cherry barbs are the least aggressive nippers of all the barbs. The tiger's could harrass your cherries to death, especially since the tank isn't big enough to fit 2 full schools. You could only fit maximum 8 cherries in that tank, and cherries are recommended to be kept in a school of 5 :3