My experience treating CPD's with the "fast" strain of columnaris [saddleback]

I just lost 10/14 of my Celestial Pearl Danios to columnaris in less than a week. Today marks my first 24 hours without losing any fish. I'm hoping the remaining 4 I was able to treat in time to save them, but it's hard to say.

I wanted to do a little write up to hopefully help someone searching for answers here in the future. I'm not out of the woods yet, but after losing 10 of my fish so fast it would take a weight off my mind to talk about it.

Of course, with hindsight (and looking back through photos to create a timeline) I realize the source of infection must have been the new addition, a cpd who came to me sick and was treated in a quarantine for obviously not long enough.

This is her midway through her 2 week quarantine, where I treated her with Paraguard, super fungus plus, and methylene blue baths + fed Metroplex food 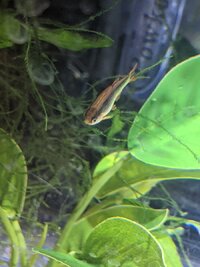 In the end, I took her out because she was eating, behaving normally, and seemed healthy enough. I didn't recognize this as the early stages of columnaris because it's so different from how I experienced it with my betta previously (he had the slower, cottony strain and made a full recovery). Note the dark spot or "saddle" right above her eyes.

Sometime around February 10th I added her to my main tank, all seemed normal for a while. 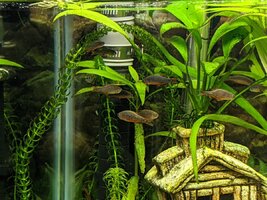 Then I noticed all my cpds were collecting in this corner. Maybe 1-3 of them would be elsewhere, but slowly all of them started hanging out here. I couldn't figure out why. Eventually I did do a really good cleaning with a huge water change, and found out my intake sponge on my canister filter needed to be squeezed out, which was in this corner. But I don't think that would be enough to cause this. My new theory is that the new cpd spread columnaris amongst them perhaps during mating, and the pathogen in the water triggered a stress response from something they don't normally find too stressful- my lemon tetras. They never nip or chase them, but they're very rambunctious. Usually the CPDs just keep to themselves, but if they were trying to fight off an illness, I can see how that could just be too much for such a shy fish.

On February 23rd I found my first dead cpd. I moved the two that looked sickest to my snail tank while I figured out what to do. One died overnight in there.

On February 24th, I had my only none cpd fatality. 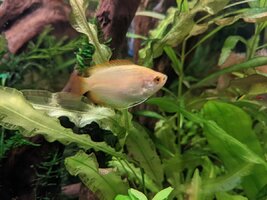 I found this female honey gourami dead against a filter intake. In hindsight, she always looked sickly. She presented no symptoms of columnaris, but I think she has a lowered immune system to begin with. It's hard to tell from the photo, but she was always incredibly pale, and was violently rejected from mating when I had a male. I could see how columnaris would be able to kill her without a trace.

Later that day, I found another dead cpd, so I set up a 5g hospital tank and moved my remaining 12 over. I dosed the tank with spectrogram (kanamycin and nitrofurazone combo), and gave everyone a Methylblu and salt bath. I did daily baths, and started painting on Merbromin on the 27th. Spectrogram dosed every other day, uneaten food sucked up daily, and big water changes before redosing.

None of that appeared to matter, because by February 27th I had lost another 5 CPDs, leaving me with 7. 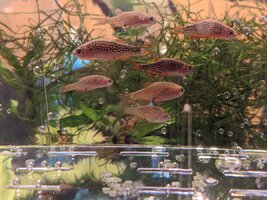 If you look closely, you can see everyone has the same saddle on their heads 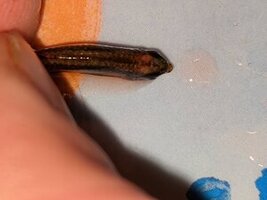 This is another fish that died on February 28th 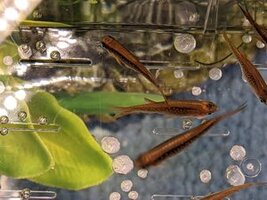 These are some of his brethren, all sporting the same saddle.

At this point, (27th), I decided I needed to try something more intense. I started doing very strong salt dips, along with the Methylblu and salt bath. The bath would be 1litre+ of water with an airstone, methylblu to a light blue color, and 2tsp aq salt. The dips I would do when returning them to the hospital tank from the bath. 1litre of water, and 1.25tbs aq salt for no more than 15 seconds.

I eventually abandoned (28th) this method for just Merbromin and hydrogen peroxide wipes. I would take the fish from the bath and hold it carefully in a net while exposing it's head and back. I had diluted (1.5%) hydrogen peroxide in a dish and Merbromin in a dish with a fish-only paintbrush. While holding it, I would paint first the hydrogen peroxide solution on the head quickly, then paint Merbromin on that and put back into hospital and tank. 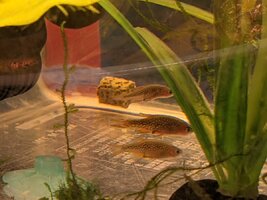 They haven't eaten in a week and at least one is scarily skinny.

This was my confirmation it's columnaris: 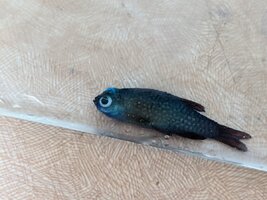 If you look closely, you can see where the bacteria burst through the saddle (march 1st) 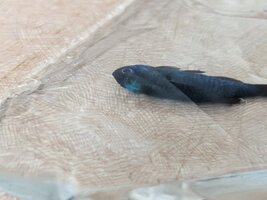 The fast acting columnaris took, in total, less than 3 weeks from initial exposure, less than 2 weeks from first odd behaviour, and less than a week from first death to wipe out 10 of my CPDs and 1 honey gourami. Columnaris is no joke

Columnaris or something else?