Here are my sky chickens! They're actually budgies, but shhhh... don't tell anyone! Btw, none of my budgies were hand raised (I tamed them all myself), they free roam my room, and I am a strong supporter of keeping them flighted, respecting their feelings and boundries, and giving them a proper diet!


1. Stormy (M), almost 3yrs old. My first budgie, very happy, energetic, and gets along with everyone. He's OBSESSED with singing and does it all day. He's one of the only birds in my flock who can sleep with other birds, so he and Pepper share a sleeping cage. He was a fully-flighted fledgeling, so he's very confident! He LOVES recall sessions and just training in general, and he hangs out with me often.
He flew away in July of last year, them was found 2 miles away at a trailer park. When I went to get him from his foster home, his eyes lit up. He recalled, spun, and kissed, he was so happy (then slept for 4 days straight upon returning home). He's my special, fluffy little boy!
I gave him (along with his late friend, Sky) to my sister to foster (in March 2021) when my mental health got bad, then she refused to give him back, and eventually neglected Sky to death. I got him back, finally, and he's been living the dream life ever since! He's seen more in his short 2 years of living than most budgies have seen in a lifetime. 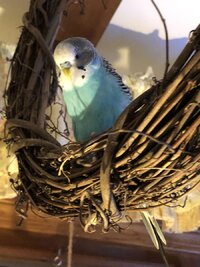 2. Picasso (F), 1yr old. My second budgie, I got her as a friend to Stormy after Sky died, and she lets me handle her a lot. She'll let me roll her on her back, and will just sit on my shoulder while I walk around. She was clipped as a fledgling, so she's pretty lazy (except during recall sessions). She's honestly a really great budgie to have around, but she will bite anyone that annoys her, so she sleeps alone. She has bonded very strongly with me, and her sweet side has really come out! She LOVES to cuddle. All. The. Time. I love her! 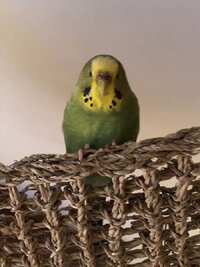 3. Pepper (M), 10 months old. My third budgie, whom I got to be friends with Picasso when Stormy flew away. He spent the first days home (until Stormy came back) hiding under my bedside table. However, he soon proved himself to be a very happy and social budgie! He's definitely NOT my most handleable bird, but he makes up with it in charm and amazing singing ability. He LOVES sitting on my fish tank light (don't worry, I have a glass lid), which is odd. He's an odd bird, and I love him. He's also my most exotic budge, a violet-mauve cinnamon recessive pied! He was clipped poorly as a fledgeling, so he could fly normally his whole life. 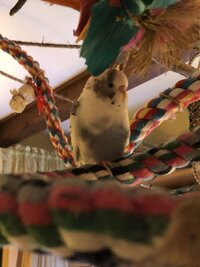 4. Apollo (TBD), 5 months old. My fourth (and final- for now ) budgie. I was meaning to get a different bird, LuLu, but there was a mix-up, and I got him instead! He was given to PetSmart when his previous owner became too sick to care for him. He refused to drink for almost a week when he came home, probably because he had been rehomed 3 times in a month, but I worked with him and he now drinks happily. He also has nighttime anxiety, which I'm also working on. He steps up, gets scritches from Stormy, and has a serious obsession with millet! He LOVES his morning chop, and he'd rather eat it over seed! He's still growing out his flight feathers, hopefully he'll be able to fly soon. 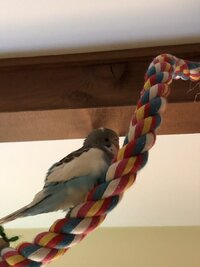 Your budgies are so cute! It's great to hear other people looking after their budgies correctly- so many people keep them in tiny cages . Picasso looks alot like one of my budgies, dini! 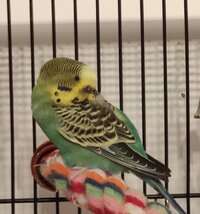 God I would love to let my little girl (Tango, 6-7 yrs?) free roam my room all the time. Unfortunately she’s a holy terror and recently developed a fear of me?I’m glad to see someone else who prefers to keep them flighted, too! 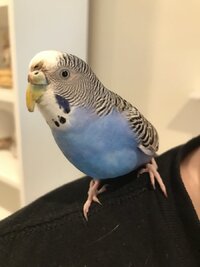 Your budgies are so cute! It's great to hear other people looking after their budgies correctly- so many people keep them in tiny cages . Picasso looks alot like one of my budgies, dini!

Aww, I love green female budgies (not like I'm biased or anything )!

God I would love to let my little girl (Tango, 6-7 yrs?) free roam my room all the time. Unfortunately she’s a holy terror and recently developed a fear of me?I’m glad to see someone else who prefers to keep them flighted, too!

Apollo is still somewhat scared of me, but I just give him his space, and I'm sure he'll warm up to me soon! By the way, Tango's beak looks quite overgrown, you should probably bring her to a vet to have it clipped.

Ah yes, the singing! I love it!

Yes she has a fast growing beak. Thinning down on the seed a lot has helped, but she still needs it trimmed. That’s a old picture just before one of her trimming appointments; we get it clipped pretty regularly by a wonderful woman named Joan.
She has also decided that me feeding her a cheerio was enough to regain her trust

A little pic of Stormy and Pepper after they finished singing to each other! 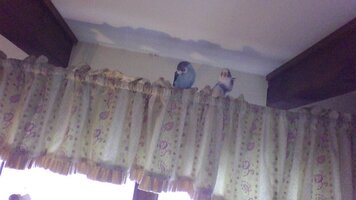 And a... ritual? On the fish tank. I love how puffy Stormy is in this one. 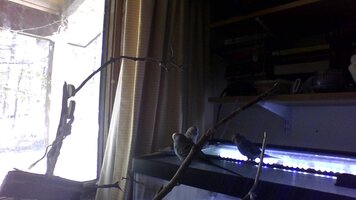 Sorry for the bad quality, these were taken on a chromebook
You must log in or register to reply here.

Please help! Ebenhard is under the weather!

How To: Culture Daphnia