My Betta Killed My Mystery Snails

And it took him just a little more than 24 hours to do it.

I feel bad for the snails. First he bit their eyes off. I thought, well, darn. So much for that idea.

What's been your experience with bettas and snails?

I've had this betta for about two weeks. He's a monster, the biggest betta I've ever seen. His name is László. His colors have brightened considerably since I first turned him loose in the vastness and comfort of five gallons of cycled aquarium, all his own. (Maybe he was jealous.) 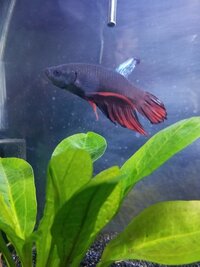 Bettas will usually get along with snails, but snails with long antennas are very likely to get them bitten off.

I never recommend mystery snails with bettas. Because those types of snails have their body stick out of their shell more than a nerite snail. The most a betta could really get off of a nerite is an antenna, and those grow back. I have a betta that would always find a nerite to pick on, he's a very angry guy all the time. Maybe pest snails would work but even the babies would probably get eaten.

I've only seen one betta attack a mystery snail's antenna, and I promptly took the snail out. She thought it was a worm or something, I'm guessing. But I've never seen nerites get attacked, likely because they have much shorter antennas and don't have long eye antenna things. They're more protected.
I have one female betta who has tried to eat a bladder snail on two occasions, but failed (too crunchy and hard). My baby betta also tried when he first saw the baby bladder snails, as he thought they were food. Eventually he realized they're not edible.
They really don't bother snails in general though. Maybe if bored.
My platies and mollies, on the other hand, think my two brown nerite snails, when on the front glass, are Sera O-nip tabs and poke and poke at them! The snails really don't like being prodded and mistaken for a round food tablet. They don't do this with the yellow mystery snail, making me believe they are able to differentiate colors and sizes... To a degree.
OP

wolfdog01 said:
The most a betta could really get off of a nerite is an antenna, and those grow back.
Click to expand...

Thanks for the tip, wolfdog. I hope my LFS has nerites.

Nooo! Pest snails are the last thing I want. I hate those things. My ex-bil had a huge aquarium with billions of guppies and even more pest snails. He once gave me a fishbowl with a couple of guppies and a small plant. It only seemed a day or two until the snails started showing up. (I didn't know what to do with the fish, anyway. Of course with them living in a little bowl with scores of snails, the ammonia soon killed them all. What did I know? )

is he a giant betta? my recently deceased betta would bite the antennae off my nerites. they learned to tuck their antennae in and flinch whenever he came near. my two larger nerites may have had it with his harassment though, because they eventually left my tank. my other two bettas have never bothered my snails. it's part of the reason why i've never gotten a mystery snail, plus they get big and poop a lot.
OP

CheshireKat said:
My baby betta also tried when he first saw the baby bladder snails, as he thought they were food. Eventually he realized they're not edible.
Click to expand...

Haa haa haaa! I'd buy a ticket to that.


CheshireKat said:
They really don't bother snails in general though. Maybe if bored.
Click to expand...

Oh, I know he's bored. I have a colorful card that I put up for him to see. He really likes that. He gets right next to it and just hovers. If I dance it around, he gets excited and dances with it.

But other than that, I'm at a loss for how to entertain him. Do you know of any ways to entertain a betta?
OP

midna said:
is he a giant betta?
Click to expand...


midna said:
it's part of the reason why i've never gotten a mystery snail, plus they get big and poop a lot.
Click to expand...

Good to know. The last thing I need is to do more vacuuming.

Georgie Girl said:
He's about twice the size of a regular betta . . . .
Click to expand...

Probably what's commonly known as a "king" or giant betta, then.

You can try a small mirror occasionally. Don't leave it out always since it might stress him out, thinking a male is always near his territory, but it can amuse and stimulate him.
OP

CheshireKat said:
Probably what's commonly known as a "king" or giant betta, then.
Click to expand...

Cool! I'll look them up for pictures of more.


CheshireKat said:
You can try a small mirror occasionally.
Click to expand...

Thanks for the suggestion, though!
OP

wolfdog01 said:
I have a betta that would always find a nerite to pick on, he's a very angry guy all the time.
Click to expand...

I'm curious about your angry fish, wolfdog. Besides picking on nerite snails, how does he show his anger?

He's an old man now, but he used to constantly swim from ome side of the tank to the other, like on a misson. He would flare a lot more than any of my other bettas and attacks his food more violently than my other ones. Plus he has black lipstick so you can really see his frown lol.
P

To keep the Betta away from mystery snails try to keep him active with a mirror or even some live food to chase after. They are healthy and get the Betta to exercise.

My guy really likes Mystery snails and seems to get bored when there isn't one in the tank. He never attacks or nips at them and they can cruise around with feelers completely extended. He uses them as food finders. He will follow an active one around thinking maybe it is headed for a food source. If the snail finds something like a shrimp or veggie pellet, Benny will try to steal it but without hurting the snail. If Benny finds a pellet that is too big for him to swallow before the snail does, he will will flare his fins and position himself on the bottom like a wall between the food and an approaching snail. He is really a character. The only time I have seen him be aggressive towards a snail was the time he was blowing bubbles up against the side of the filter box and a Nerite was climbing up the wall towards the surface. He flared out and nipped at the snail's shell until it turned around and headed back down. He didn't hurt it though.
Share:
Facebook Twitter Reddit Pinterest WhatsApp Email Link