wodesorel
This is my little summer pond, we have set it up for the past three years. The frame is an old sandbox our neighbors put at the curb when they moved. (We also got their cat.) I line it with a layer of landscape fabric to help prevent punctures, and then a single layer of 3 mil plastic drop cloth. It has lasted from April to September each year without issue!

There is a decent 400 gph pump buried in lava rock in a pond basket for filtration. Since there are no fish I do not bother testing water. I do add ferts throughout the summer to get the hyacinth to bloom regularly. I didn't have a pot of marginals last year and the floaters did poorly, so I think they benefit from soil runoff. The pot is lined with landscape fabric to prevent debris and the soil is mixed with mulch to keep it aerated. I went with an in-water output on the filter this year rather than a small fountain.

In a few months it will be loaded with tadpoles and a few large frogs that venture up from the wetlands. It also provides water for several wasp and hornet nests around the neighborhood. Standing out there is like being at an international airport, and the different hives use the same route every time! I have never been stung, they are laser focused on water runs. Right now there are two tadpoles that hitchhiked on the water plants, and I need to fish a trapdoor snail out of the big pond for some algae control.

All in all it was a cheap project. The frame and pump were free. The basket and lava cost about $5. The plastic is $8 a roll, and the fabric we had leftover from a yard project - those need replaced yearly. The priciest thing was the dowels I tried this year for a cleaner edge on the plastic, they were $1.50 each and I needed six. Really happy with how it came out, used them as a striaght edge to tuck the plastic back in on itself. Much neater than the mess in years past, though that was covered by the top boards that I couldn't find in the shed this year.

Once the plants die down after the first frost it gets converted into a planter for fall, to safely overwinter perennials that are potted up for the summer, and for some fall color from mums and kale! 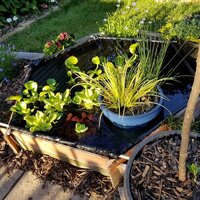 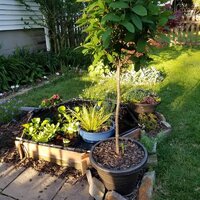 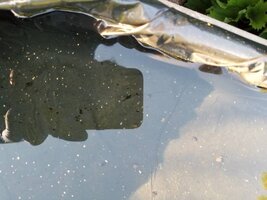 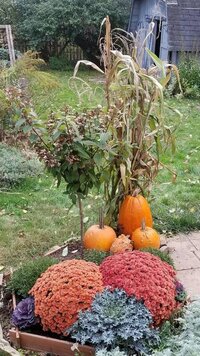 Gypsy13
It sounds absolutely adorable! Thank you for helping our wildlife. Especially the bees and frogs! My frogs are going bonkers tonight. I love the sounds they make!
maggie thecat
That's really nice! I like the seasonal change of use.
Fanatic
Nice! I have wanted a pond for years now
wodesorel
Okay, so I added one purposeful inhabitant yesterday. I have been wanting a Cana snail for almost 13 years now, since my last one died. Inside, snails do poorly, but outside they do great, so she is living in the pond for the summer. 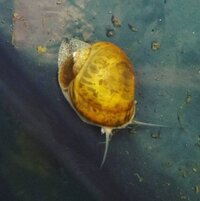 Fanatic
Awesome!
Gypsy13
Cool! I’d love one. But then so would my greedy comets.
wodesorel
Ended up with a surprise fish! Must have come with the plants, it's about three inches. I am betting it's a koi! We scared the out of each other when I bent over the pond.
kettlekorn13

Ended up with a surprise fish! Must have come with the plants, it's about three inches. I am betting it's a koi! We scared the out of each other when I bent over the pond.
Click to expand...

If you can get a picture we wouldlove to see it!!! You can tell if its a koi because they have little barbels around their mouths.
wodesorel
I spotted two together! There are so many roots from the water lettuce and hyacinth that I can barely get a glimpse before they shoot off and hide.
wodesorel
Bass maybe? The plants came from a fish farm, but were kept in a separate containment area. 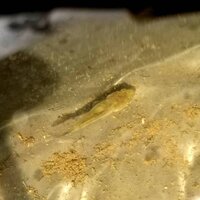 wodesorel
Maybe this is a little better? 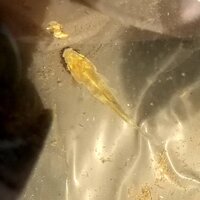 Maybe this is a little better? View attachment 447515
Click to expand...

Dec 15, 2010
Charlemagne
Filtration Idea For A Pond Looking For Any Tips