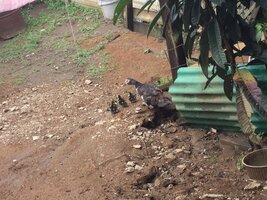 My female Muscovy had ducklings, any idea what the adult mix will look like?

Is the ducklings' father a mallard? I used to have one male hybrid (muscovy father x mallard mother) and it's very large; even larger than a full grown male muscovy. As it is a hybrid between two different genera, it is sterile and is not interested with the females. Head shape (no caruncles) and bill is mallard like but larger, feather pattern is a mix of muscovy and mallard, legs are longer and have wider feet. And it's too heavy to fly though it have a large wingspan. As I remember, my friend had hybrids also but from a male mallard and a female muscovy. His are smaller and they can fly.