Member
Hey guys, I wanted to share a project that I did last night that I am super proud of, I think the final result looks a lot better than the original. It's a long post, so be warned. There are a good bit of pictures though if you wanna just scroll through the project! I do have a question at the end I would love to have answered though.

BACKGROUND:
I had a cool manzanita branch that I've always wanted to look like a moss tree. Originally, I glued patches of moss around the tree, and it didn't come out how I was expecting, so now I am trying fishing line. My heavily planted tank (20g) started getting bad algae issues when the co2 system stopped working. Yesterday I got the co2 running again, giving me a wave of inspiration to bring this tank back to its former glory!

PROJECT:
I had very poor flow (~35gph), high light, and no co2, so I was taken over by blue green algae and green hair algae. Here is a picture of my moss tree before fixing it up: 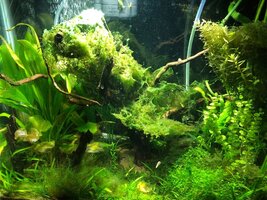 So I wanted to trI'm back some of the heavy growth, make the tree look better, and get more flow.
I took the whole HOB filter off, and replaced it with an Aqueon 75, which I think may be a bit heavy on the flow, but the few fish don't seem to mind too much. I took the whole tree out, and put all of the moss into a tupperware container that I sprayed down with Flourish Excel. I figured the excel may kill off the moss a little, but there was so much moss that I knew it would recover eventually. Then I wrapped the moss around the tree and used fishing line to hold it in place: 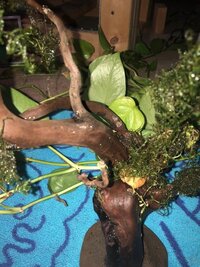 I wanted to leave one branch naked just because, so here is a pic before I submerged it again: 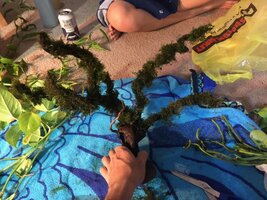 Then I trimmed back my carpet plants, and brought my rotala down to about an inch tall, and put the tree back in. Then I reconfigured the new HOB to accommodate my aquaponics plants, restarted the flow, and here is a pic from this morning now that all the dust has settled: 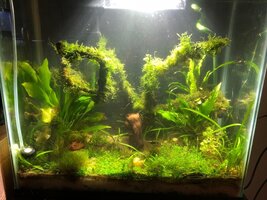 I probably could still use some more trimming, but I still like it slightly out of control. I hope you like the new setup, I would love some feedback or comments on it!

Question:
This tank has never had any filter media in it before, the nutrients stay at 0/0/0 due to the heavy plant load and large root mass in the aquaponics setup. Now that my HOB has doubled in size at least, I put some ceramic media/kitchen scrubbies in with the roots. Will I go through a cycling phase? I would guess that the bacteria would pick up the ammonia before the plants do, so should I be worried either about that or bacteria "outcompeting" my plants for the nutrients? I guess the plants would still get nitrates, but I'm just wondering if anyone had thoughts on this issue?

Member
Cool! I love the mossy tree!
That should look pretty neat with fish swimming through it!

Member
Thanks! The fish in there are only temporary inhabitants, I am still working on a final stocking plan for that tank, I'm open to suggestions too!